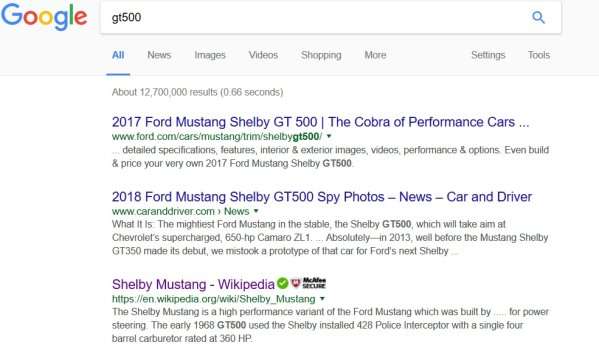 Ford Motor Company hasn’t officially acknowledged the rumors of the upcoming Mustang Shelby GT500, but a listing on Google from Ford.com and a Shelby GT500 extension on the Ford website suggests that a new high performance Mustang is on its way for 2017 – presumably storming onto the scene to battle the Dodge Hellcat cars.
Advertisement

Since the current Ford Mustang was introduced late in 2014, there have been rumors of the next super-Stang – presumably named the Shelby GT500. When the newest Ford Shelby GT350 and GT350R debuted, some people believed that this road-handling machine was effectively replacing the GT500, but the rumors persisted. Images and videos showing what many believe to be new GT500 Mustang test cars on the road have been reinforced by inside information and dealership information – all of which seems to suggest that Ford was working on a new GT500.

Well, based on a listing on Google from Ford.com, the Mustang Shelby GT500 is coming and it could be arriving for the 2017 model year.

Google Reveals Ford’s Secret Mustang
if you go to Google.com and search “GT500”, you will likely get a similar view to what I have included in the screen shot above – clearly showing an information link for the 2017 Ford Mustang Shelby GT500 with the description “The Cobra of Performance Cars”. Unfortunately, the internet is chock full of clickbait junk sites claiming to have information on the next GT500 Mustang, but if you take a closer look at this particular listing for the 2017 Mustang GT500, you will see that it comes from Ford.com.

If you click this link, you are taken to www.ford.com/cars/mustang/trim/shelbygt500 , but you will only find information on the rest of the current Ford Mustang lineup. There is no mention of the Shelby GT500 anywhere on this page, but the fact that Ford’s web team has added the Shelby GT500 extension with a title and a slogan is just short of concrete proof that there is a new high performance Mustang coming for 2017.

I would guess that someone on Ford’s web team was tasked with adding the web address and the page source information for the 2017 Mustang Shelby GT500, but the page hasn’t actually gone live – so the link takes us to the general Mustang information page on Ford.com. However, I expect that at some point in the near future, someone from Ford’s web team will “flip the switch” and that link above will take us to a page on Ford.com with all of the information on the next generation Shelby GT500 Mustang.

What to Expect from the 2017 Mustang Shelby GT500
Since this link doesn’t lead to anything unique on Ford.com, there is no further information to get from the link, but within the page source information, there is a tag for a 5.8L engine – seemingly suggesting that the 2017 Ford Mustang Shelby GT500 will have another 5.8L mill. The 2014 GT500 had a supercharged 5.8L engine offering 662hp and 631lb-ft of torque and I would expect that a new GT500 would have more power than that. I also expect that the new GT500 will have more power than the Dodge Challenger SRT Hellcat, but that is purely speculation based on the constant goal of 1-upping the competition in the performance car world.

Ford can surely squeeze the old 5.8L V8 to offer more than 707 horsepower, but it will be interesting to see just how different the engine in the 2017 Mustang Shelby GT500 is from the 2014 version…and that is if Ford does use a 5.8L V8 in the new super-Stang.

There have long been rumors that the next Shelby GT500 would pack twin turbos rather than a supercharger, but there has been nothing to confirm that bit of information. We can expect that the new GT500 will have some sort of forced induction and a twin turbo V8 marketed as an EcoBoost engine could be just what Ford needs to battle the Hellcat Dodge cars. I would expect that this new GT500 will have the same high performance brakes and suspension bits as the GT350, but with added cooling features and unique suspension tuning for a car with more than 700 horsepower.

Finally, if the next Ford Mustang Shelby GT500 is to arrive for the 2017 model year (which would be a shock so late into the model year), we can expect to see it in a few weeks at the 2017 North American International Auto Show in Detroit.

Thanks to Max for the note on this interesting Google search!