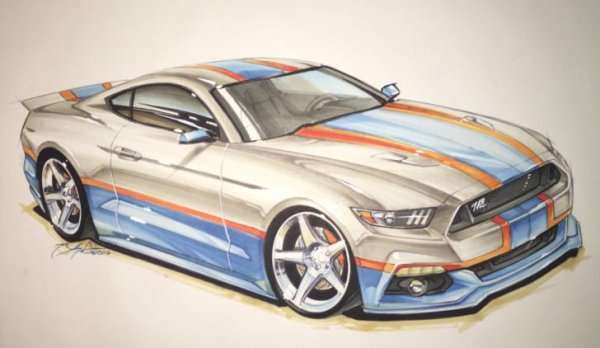 The tuning shop of NASCAR legend Richard Petty has announced that they will build 500 examples of the 2017 Ford Mustang GT “King Edition” with 670 horsepower along with a new “Premier Edition” with 825 horsepower – with warranties for both packages!
Advertisement

2017 marks the third year where the Petty’s Garage tuning shop will offer a spread of high performance Ford Mustang models for sale at dealerships around the country and for the new model year, we will see the greatest volume of custom Mustangs built by Petty’s crew thus far - with more than 500 units planned for production. Also, the 2017 Ford Mustang will get four different packages from Petty’s Garage, giving prospective Mustang buyers a handful of “factory custom” options for the Mustang GT and the new EcoBoost model.

"We couldn't be more excited to continue our relationship with Ford Motor Company and announce our builds of the 2017 Mustang," said Russ Stellfox, Chief Executive Officer, Petty's Garage. "These vehicles will carry a special meaning with a scheme that will honor Richard Petty and his 80th birthday in 2017. The silver design is the same as the 25th anniversary scheme that the famous No. 43 raced in 1996. We're honored to offer this to our fans and customers and believe that these machines will be in high demand."

2017 Ford Mustang GT King Edition
First up, the most notable 2017 Ford Mustang package from Petty’s Garage is the King Edition, shown in the artwork above. While this Ford Mustang GT has been modified on the outside with a flashy paint job, new wheels, a new rear spoiler and what appears to be a more aggressive chin spoiler, the most important aspect of the King Edition is under the hood. By strapping a supercharger to the 5.0L V8 engine, the output is lifted from 435 horsepower to 670 horsepower, and even with the extra power, these customized Mustangs maintain their factory warranty.

In addition to the supercharged engine upgrade, the 2017 Ford Mustang GT King Edition can be ordered with upgrades brakes, a high performance suspension system and a spread of other performance goodies from Ford Racing.

There will be 500 examples of the 2017 Ford Mustang GT King Edition built and among those, 43 examples will be designed to celebrate Richard Petty’s 80th birthday in July.

The Premier Edition Mustang
For those prospective buyers who like the look of the 2017 Petty’s Garage Ford Mustang GT, but who also demand more power, there is the Premier Edition Mustang as well. These modified Ford Mustangs lay down 825 horsepower with all of the style of the King Edition, but the higher performance package does not maintain the factory warranty. Instead, there is the option of a third party warranty for 3 years and 36,000 miles.

Lower Performance Petty Mustangs
Finally, for those Ford Mustang fans who like the look of the Petty’s Garage models, but who don’t see the need for the big power, there are two options for the 2017 model year. There is a naturally aspirated version of the GT planned as well as a new EcoBoost model, both of which will have a unique exterior design, but they will both cost less due to the lack of big power increases.

There is no official pricing yet for the Petty’s Garage 2017 Ford Mustang packages, but the press release explains that the naturally aspirated version will start around $35,000. In other words, the appearance package for the Mustang GT shouldn’t cost a whole lot more than the “normal” Mustang GT.

As more information becomes available on the 2017 Petty’s Garage Mustangs, you will find it here on TorqueNews.com.

Steve wrote on June 28, 2016 - 4:36pm Permalink
First of all, I want to state that Richard Petty is building high HP Mustangs is awesome. I read the article of the two models the "King Edition" and thought that's cool Richard Petty had a nick name of the "King", so that makes sense. Then comes the "Premier' edition, and that name just doesn't sound right, if they are going to all the 670 HP edition "King" then one that is over the top more powerful it's "Premier" what is this a movie? Come on, a 825 HP Mustang is about in your face outrageousness, it's not a "Premier", it's a punch in the face, a kick in the testes, but it's not a Premier. How about "King Kong" edition or "Nightmare Edition" or "Hell on Earth edition" perhaps 825HP Edition, just not "Premier". Please Ford - don't sell them Mustangs unless they drop the name Premier, it does not belong next to "Mustang" I am depressed that Richard Petty doesn't understand that.
Gary & Laura Alkana wrote on January 13, 2017 - 9:34pm Permalink
Laura & I are having a tribute being built, We can't wait until it's finished, the build pictures does not due this work of art justice, first class build, a first class company, looking forward to flying from California to see our car & Mr Petty museum