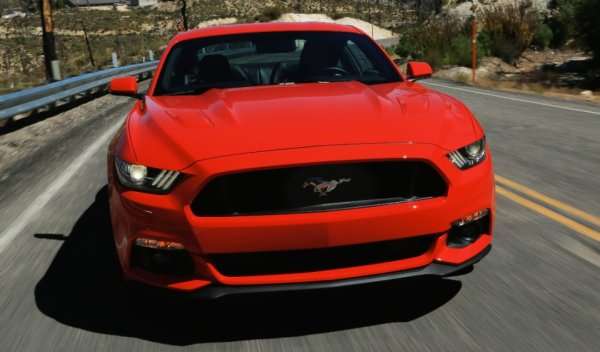 The 2017 Ford Mustang EcoBoost Could Gain HP from Focus RS

The new Ford Focus RS will make its American debut next week at the 2015 New York International Auto Show with a new, more powerful 2.3L EcoBoost engine that could end up in the Ford Mustang EcoBoost for the 2017 model year as well – bringing new levels of power to the fuel-sipping pony car.
Advertisement

So far, we don’t know exactly how much power the new Ford Focus RS will have when it becomes the first “RS product” to be sold in a North American dealership, but we know that it will be powered by the same 2.3L turbocharged 4-cylinder that powers the 2015 Ford Mustang EcoBoost. Ford has promised that it will have at least 315 horsepower while also explaining what components went into making the Focus RS engine more powerful than the similar engine in the Mustang.

These components make the Focus RS more powerful, but they should all do so without adding a ton of cost to the engine or without making the engine less efficient – which leads me to believe that Ford could put the Focus RS parts on the EcoBoost Mustang for the 2016 or 2017 model year.

Focus RS Power Adders
Typically when we talk about power adders, we are talking about aftermarket components such as a supercharger or nitrous oxide setup that adds power to a stock engine, but in this case, I am talking about the features of the Ford Focus RS engine that make it unique from the similar 2.3L EcoBoost in the 2015 Ford Mustang. These engines are fundamentally the same, but the Focus packs a collection of items that will allow it to make more power than the engine in the EcoBoost Mustang.

First off, the Focus RS team has added a new low inertia twin scroll turbocharger with a larger compressor wheel than what is found on the 2015 Ford Mustang EcoBoost. This turbocharger will help to jam more air into the engine with the help of a new low restriction intake system and a larger front mounted intercooler that helps cool the compressed air entering the engine. Also, the Focus RS is fitted with a higher flow exhaust system that helps the engine exhale a little easier while also providing a throaty, angry bark under hard throttle.

When mated with the direct injection, twin independent variable camshaft timing and auto start-stop, this engine is promised to deliver at least 315 horsepower while still reaching what the Motor Company calls “respectable” fuel economy.

Ford Mustang with RS Power
The 2015 Ford Mustang EcoBoost offers 310 horsepower and 320lb-ft of torque while being the most efficient muscle car on today’s market. The Focus RS is expected to arrive in the spring of 2016, presumably as a 2017 model year vehicle, with at least 315 horsepower. Rumors indicate that the RS will pack somewhere in the area of 325 horsepower and 350lb-ft of torque, so if the components of the Focus RS will offered in the 2017 Mustang EcoBoost, there would be plenty of space between the beefed up 4-cylinder Mustang and the 435hp Mustang GT.