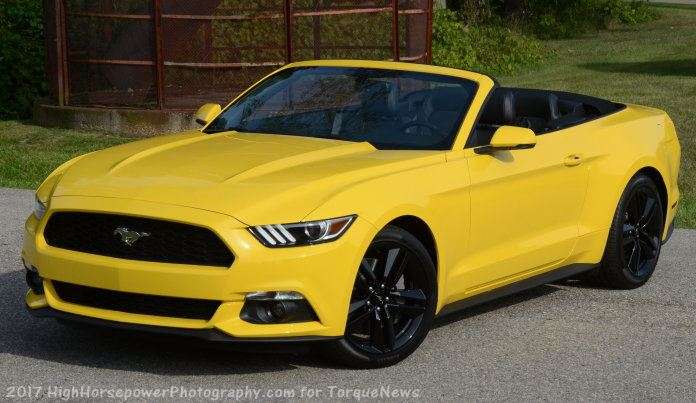 2017 Ford Mustang EcoBoost Convertible: The Greatest Base Mustang in the Making

I recently spent a week driving the 2017 Ford Mustang EcoBoost Premium Convertible with the manual transmission and having spent time driving lots of “base model” muscle cars/pony cars from Ford, Chevrolet and Dodge, I believe that this turbocharged 4-cylinder engine will help make the 2018 EcoBoost Mustang the greatest entry level American performance car.
Advertisement

This is a review of the 2017 Ford Mustang EcoBoost Premium Convertible with the 6-speed manual transmission, which will be the entry level model for the 2018 Mustang. The current base engine in the 2017 Mustang is the naturally aspired V6, but that mill is being discontinued for the 2018 model year, making the 2.3L EcoBoost 4-cylinder the base engine. For the 2018 model year, the EcoBoost 4-cylinder gets a little more torque – up to 350lb-ft from the 320 in my test car – which will make an already great engine even better, but even if everything remained the same, the 2018 Mustang EcoBoost will be the greatest entry level Mustang ever.

EcoBoost Power
The current base model Ford Mustang with the V6 engine offers 300 horsepower and 280lb-ft of torque, numbers which make it the most powerful base model Mustang ever, but the EcoBoost for 2018 will offer 10 more horsepower and 70lb-ft more torque, both of which will make the least expensive Mustang considerably quicker and faster than the current V6 models. The V6 has a touch more initial pop when you hit the throttle due to the minor amount of boost lag with the EcoBoost engine, but as soon as the turbo spools up to full boost, the EcoBoost Mustang pulls considerably harder all of the way through the powerband. As a result, the EcoBoost Mustang might not be quicker in the first few feet of a race against a V6 model, but in every basic measure of performance – 0-30, 0-60, 0-100 and quarter mile times – the EcoBoost Mustang is considerably quicker. My bright yellow 2017 Ford Mustang EcoBoost Premium Convertible test car was fitted with the 6-speed manual transmission, which allowed me to keep the engine RPMs up and with RPM, both boost levels and power levels remained higher during periods of spirited driving. Also, even when you are cruising on the highway in 6th gear with the RPMs nice and low for better fuel economy figures, putting the hammer down after a quick downshift will allow the EcoBoost engine to quickly build speed.

It obviously doesn’t provide the power of the 5.0L V8 engine, but the 2.3L EcoBoost engine for the 2017 model year packs more power than any non-V8 (and many V8s) before it – making it the best-performing entry level option ever for the Ford Mustang. Granted, my opinion here on the 2018 base model Mustang is based on the current 2017 EcoBoost Mustang, but I am certain that the extra torque will only reinforce my angle here.

EcoBoost Efficiency
The 2017 Ford Mustang EcoBoost Convertible with the 6-speed manual transmission is expected to yield 21mpg in the city, 27mpg on the highway and 23mpg combined, but during my time with the turbocharged pony car, I saw considerably better numbers. On a highway drive from my house to a busy urban are 20 miles from my house and back to my house – which is a common commute for folks in my area – I averaged 33 miles per gallon. That is cruising with the top up, driving within a few miles per hour of the 70mph speed limit. Granted, the stretch of highway is fairly flat, so if you live in a hillier area, you aren’t likely to see these numbers, but if your daily commute consists of flat highway driving – exceeding the EPA numbers is very possible without any special effort. So, based on the driving dynamics of the 2017 Ford Mustang with the EcoBoost engine and the plans for more torque from the 2018 models, we can be assured that the refreshed EcoBoost Mustang for 2018 will be the most powerful, the most efficient and the overall most fun to drive of any non-V8 Mustang.

More Features with the Next Base Engine
One of the shortcomings of the current 2017 Ford Mustang base model with the V6 engine is that you cannot add many of the most popular features, like leather seats and the Sync infotainment system, so getting the base engine means that you are also forced to get base features. On the other hand, once the V6 has been removed from the lineup for the 2018 model year, the EcoBoost 4-cylinder will be the base engine for the Mustang, but buyers will be able to get that base engine with the Premium package and some premium features. While there will likely be a pure base package with the standard features of the current V6 base model except with the EcoBoost engine, the removal of the V6 engine will allow every Mustang buyer (regardless of the engine chosen) to get all of the premium interior goodies.

The Final Word
The 2017 Ford Mustang EcoBoost Premium Convertible is not the base model ragtop right now, but when the 2018 models arrive later this year, this bright yellow test car will essentially be a dressed up base model with premium interior features – and it will undoubtedly be the most enjoyable base Mustang convertible ever. While there will most certainly be people who mock the fact that the Mustang base engine is a 4-cylinder, this 4-cylinder engine is better than any non-V8 and many V8s in the history of the Ford Mustang.

Aside from the number of cylinders, there is really nothing bad to say about the 310hp EcoBoost Mustang, as it is as quick and as powerful as some V8 engines from the past decade while also being vastly more efficient. With the exception of the people who absolutely insist on having a V8 in their muscle car, the EcoBoost engine is a great option for someone who wants a fun-to-drive pony car with a smaller price tag and better fuel economy. More than half of Ford Mustang buyers pick a model that doesn’t have a V8 engine, showing that more than half of Mustang buyers don’t place power levels at the top of their priority list when shopping for a new car. For those prospective buyers, the 2017 EcoBoost Mustang Convertible will become 2018’s base model drop top pony car and this small, turbocharged engine will be the best base engine ever in the legendary Mustang.