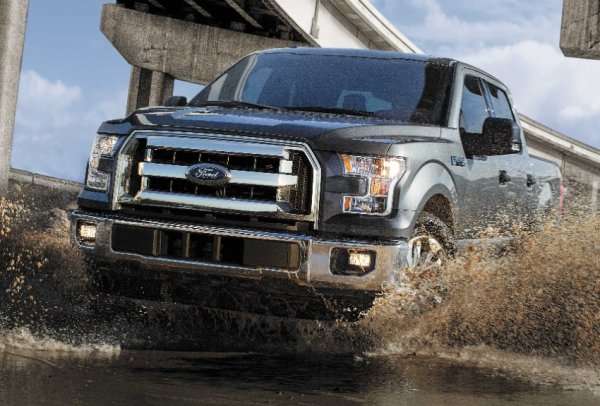 The 2017 Ford F150 pickups equipped with the 3.5L EcoBoost will come standard with the new 10-speed automatic transmission and a whole lot more torque, but the jump from 6 gears to 10 is only causing a slight improvement on the fuel economy numbers – but it is still enough to beat the Hemi Ram and the Chevy Silverado Hybrid.
Advertisement

We first learned that the 2017 Ford F150 Raptor would feature a new 10-speed automatic transmission back when the concept version of the truck was introduced at the Detroit Auto Show. This gearbox was designed in conjunction with General Motors and a related 10-speed automatic transmission will be offered in the 2017 Chevrolet Camaro ZL1, so it made sense for the first Ford application to be the most powerful factory F Series pickup ever.

However, Ford announced more recently that the 10-speed automatic transmission will be standard in all 2017 F150 pickups with the 3.5L EcoBoost V6 – as will more horsepower and torque – likely leading to better fuel economy as well.

Today, we have the fuel economy numbers for the 2017 Ford F150 with the 3.5L EcoBoost and the 10-speed automatic transmission, and while they are improved over the 2016 model, the numbers didn’t improve as much as I had expected.

When you equipped that same 2017 F150 with four-wheel drive, the EPA numbers slip to 17 miles per gallon around town, 23mpg on the highway and 20mpg combined. The city and highway numbers each increase by 1mpg while the combined number improves by 2mpg.
Now, we should keep in mind that while the 2017 F150 fuel economy numbers for the new transmission aren’t drastically higher, we are talking about Ford’s premium half ton engine. With 375 horsepower and 470lb-ft of torque, this is the most powerful and the most capable engine in the half ton class, so rather than looking at how much it improved over 2016, we should look at how the 2017 F150 with this drivetrain compares to the other premium trucks on the market.

F150 VS Ram, Chevy
The premium engine for the 2017 Ram 1500 is the 5.7L Hemi V8, which offers 395 horsepower, 410lb-ft of torque and a fuel economy mix of 15 city, 22 highway and 17 combines (in rear wheel drive form). This means that the F150 is slightly less powerful in terms of horsepower, but it packs far more torque and it is considerably more fuel-friendly in every category.

For the 2017 model year, Chevrolet is offering their Silverado as a rear wheel drive hybrid with the 5.3L V8 and this package has received EPA ratings of 18 miles per gallon in the city, 24mpg on the highway and 20mpg combined – making the 2017 Ford F150 with the most powerful and most capable engine option more efficient than Chevy’s hybrid truck. This is not Chevy’s premium engine package, but the fact that the F150 with its most powerful engine option is more efficient than the Silverado Hybrid says a great deal about the EcoBoost engine.

So, while the 2017 F150 isn’t vastly more efficient than the 2016 models, it is still considerably more fuel-friendly than either of the competitors’ premium performance drivetrains.

Bryan jean wrote on October 6, 2016 - 9:58am Permalink
It's pretty funny why Ford ain't went bankrupt , tbh I smoked that eco boost turbo, a 50k truck up against my badass 5cyl. Colorado al stock in the lite rain come on now Ford all ur trucks have failed trying to come close to a real truck, like a Chevy, or Ram , but hey if ya ain't afraid to spend keep it up ur doin it, by The time Ford's on the lots with there upgrades trying improving , all our Ford owner's are already buying a Chevy or Ram so ur trucks will wittle away while waiting to be sold , wth unite have to drop 30 G's just to sell the upgraded junker always under a bunker
Dave wrote on October 6, 2016 - 3:23pm Permalink
Please tell me Bryan's post is sarcasm. I know young children that have better grammar than this.
Alan wrote on November 19, 2016 - 8:45pm Permalink
You couldn't beat me I race with one arm behind and my right leg cut off
Jim wrote on October 21, 2016 - 2:04pm Permalink
Hybrid is not marketed or sold nationally by General Motors. Headline is BS as is the content. It is not relevant to truck buyers.