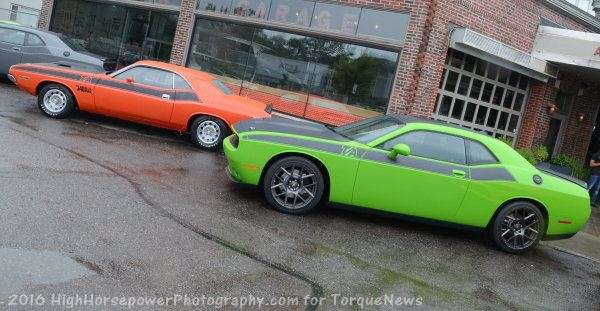 Based on information from my dealership contacts, the 2017 Dodge Challenger T/A and Challenger T/A 392 officially go on sale next week as FCA opens the order bands to dealers – meaning that if you want to get a new T/A model soon, this is a good time to talk to your local Dodge salesperson.
Advertisement

Just before the 2016 Woodward Dream Cruise, the folks from FCA held a small, private event at a restaurant along Detroit’s famous avenue, where they introduced the media to the 2017 Dodge Challenger T/A and the 2017 Dodge Charger Daytona. Each of these new trimlines take key features from the Hellcat models and apply them to the lower cost and lower power models, offering new levels of performance at a very low price.

Needless to say, the rebirth of the Challenger T/A after 46 years has drawn a ton of interest from the consumer market and if you are one of those prospective buyers, the time has come to order Dodge’s newest muscle car package – as the order banks for the Challenger T/A, T/A Plus and T/A 392 open next Thursday (October 13th).

The Challenger T/A package starts with the standard features of the Challenger T/A and adds dual “air catcher” headlights, a stain black hood from the Challenger SRT 392, a cold air intake kit that feeds from the hood scoop, 20 inch black Mopar wheels wrapped in Goodyear Eagle F1 tires, Mopar hood pins, a satin black fuel door, a satin black rear spoiler, the satin black T/A stripes on the sides of the car, a 2.75 inch active exhaust system and the Super Track Pak – which includes a high performance Bilstein suspension setup with ½ inch lowering springs, performance brakes and a three-mode electronic stability control system with a full off setting. With the 6-speed manual transmission, the 2017 Dodge Challenger T/A has an MSRP of $38,385 with destination.

The Challenger T/A Plus package starts with the Challenger T/A (5.7L Hemi) and adds heated and cooled Nappa leather front seats, the new 4th generation UConnect system with a dedicated Dodge Performance Pages button, a leather wrapped steering wheel and a premium 6-speaker sound system – all with an MSRP of $41,235 with the manual transmission.

Finally, the Challenger T/A 392 package is built on the Challenger Scat Pack with the 392 Hemi, but this more powerful T/A setup adds the dual air catcher headlights, the satin black hood with the functional air intake, the massive Brembo 6-piston front calipers over 15” rotors and 4-piston rear calipers over 14 inch rotors similar to those on the Hellcat Challenger, a uniquely tuned front Bilstein suspension setup, unique lightweight 20 inch wheels wrapped In the Hellcat’s Pirelli tires, 392 fender badges, the T/A fender stripes, the active performance exhaust system, T/A embroidered seats and a 180mph speedometer. This package with the 6-speed manual transmission has an MSRP of $45,090, including destination.

Order Banks Open Next Week
Based on information from a few dealerships around the country, FCA will officially open the order bank for the 2017 Dodge Challenger T/A next Thursday, October 13th. This means that dealers can begin sending orders in to FCA for production and while some buyers have told me that they have already put money down at their local dealer for a new Challenger T/A – next Thursday marks the start of actual orders being sent to the factory.

As is the case with any highly sought after performance car, the 2017 Dodge Challenger T/A is likely see a big push for sales early on, which could lead to some dealership markups and maybe even a wait for those prospective buyers who don’t talk to their salesperson very soon. However, as we get into 2017, the slick new Challenger T/A in all trimlines should be acquirable for MSRP all over the country.

That being said, if you want to be one of the first people in America to get a new Challenger T/A, you might want to talk to your local dealership right away.