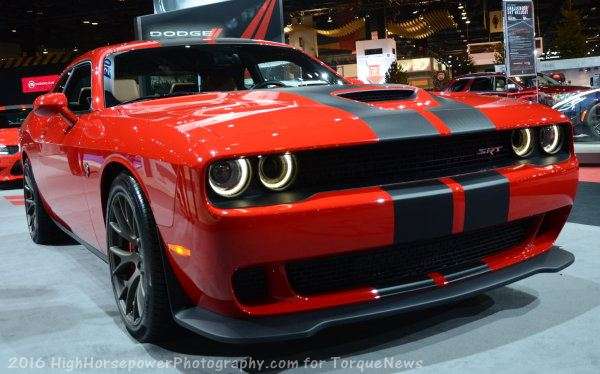 There are some reports going around insisting that Dodge will build a car called the Challenger Cobra for the 2017 model year, but I am here to disappoint all of those folks who are hoping for this too-good-to-be-true twin turbo V6 muscle car.
Advertisement

A variety of irreputable news sites have reported that there will be a 2017 Dodge Challenger Cobra to fill the hole created by the exit of the Dodge Viper. These outlets go so far as to insist that they have early information on the drivetrain of this Challenger Cobra, which will be the 3.6L Pentastar V6 fitted with a pair of turbochargers for an output of 550 horsepower.

While I won’t downplay the possibility of a twin turbocharged V6 in the Dodge Challenger at some point in the future, it won’t be coming for the 2017 model year and it certainly won’t be called the Cobra. Never has Chrysler offered any hints to the existence of a Challenger named the Cobra or a high performance twin turbo V6 muscle car, so anyone claiming to have inside information on a high end, high performance V6 Challenger is just making everything up.

Unfortunately, people share articles like the ones insisting that there is a 2017 Challenger Cobra coming around the various social networks and from there, people who can’t tell the difference between a real story and a fake story tell others about this twin turbo V6 Challenger – and that is how outlandish rumors spread.

#1 – “Cobra” – Although Dodge has used the Viper name for more than 20 years now, the Cobra name has always been a Ford thing. Most recently, Ford uses the Cobra name on their Cobra Jet drag racing Mustang and to do that, I expect that they have the trademark rights to that name in the automotive world.

#2 – Twin Turbo V6 – The 2017 model year is expected to be the final year for the current generation Dodge Challenger so special edition models are likely – but something like an all-new engine with big horsepower is very unlikely. I have spoken with inside sources who have seen the current Pentastar V6 undergoing testing with twin turbos, but the company isn’t going to roll out something like that at the end of a generation. If anything, I would expect an engine like that to come out a few years after the introduction of the next generation Challenger.

#3 – No Position in the Lineup - While 550 horsepower from a twin turbocharged Pentastar V6 is very possible, how would that engine really fit into the 2017 Challenger lineup? It would be slightly more powerful than the 6.4L Hemi Challengers, but it would likely have a much higher price. If you get too far from the SRT 392 pricing, you are running into the range of the 707hp Hellcat Hemi – and no one is going to buy a twin turbo V6 with 550hp when they can get a supercharged V8 with 707hp for a couple grand more.

#4 – Timing – March 2016 is only a few days away, meaning that the start of production for 2017 is only a few months away. Many plants retool in the summer for the next model year and realistically, we can expect the 2017 Challengers to begin shipping later this year. If they were going to roll out a new twin turbo, high performance muscle car later this year – they would have talked about it at either the Detroit or Chicago auto shows.

#5 – No Mention from Major Outlets – Finally, and most notably, there has been no news of this 2017 Challenger Cobra. If Chrysler had offered any kind of information about them even considering a car called the Cobra, it would be plastered all over the automotive world. On the other hand, the only sources to report the Challenger Cobra have absolutely no resources to back up their claims. If something like this was legit, even if it had been first announced by a small outlet, major outlets would have been quick to jump on the story. Instead - nothing.

The good news is that if 2017 proves to be the final year for the current Dodge Challenger, we should see at least one special edition package – if not more than one. However, don’t expect any of them to be called the Cobra, or to have a twin turbocharged Pentastar V6.