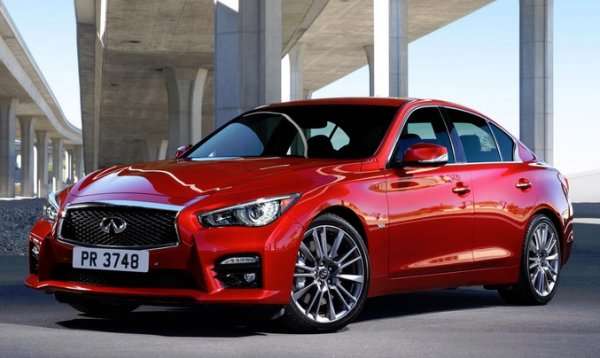 Last night at a small holiday party in the Metro Detroit area, Infiniti rolled out the 2016 Q50 sedan in the high performance Red Sport 400 trimline, packing 400 horsepower from a new twin turbocharged V6 engine and the buyer’s choice of rear- or all-wheel drive – creating what should be a very entertaining luxury sedan.
Advertisement

The 2016 Infiniti Q50 sedan looks a great deal like the 2015 model, but there is a big difference under the hood. Where the 2015 models are only available with the 3.7L VQ series V6 with 328 horsepower and 269lb-ft of torque, that engine is gone from the lineup for 2016. Instead, a trio of new turbocharged engines will be offered for the new model year, including a 4-cylinder and a pair of V6 mills. The Hybrid model also continues on from 2015 to 2016.

2016 Q50 Red Sport 400
While Infiniti offered up information on the entire 2016 Q50 range last night, the car on display was a new Q50 Red Sport 400. The heart of this sport sedan is a new twin turbocharged 3.0L V6 that delivers 400 horsepower and 350lb-ft of torque to either the rear wheels or all four wheels via a 7-speed automatic transmission.

This package offers a massive increase in power over the 2015 Q50 and even though Infiniti doesn’t expect this to be a high volume model, the Red Sport 400 is a gorgeous option for a prospective Infiniti buyer who wants big power from his or her new luxury sedan.

Two Other Turbo Options
Those 2016 Infiniti Q50 buyers who don’t need the big power of the Red Sport 400 package can opt for the base model 2.0L turbocharged 4-cylinder with 208 horsepower and 258lb-ft of torque or a lower performance version of the twin turbo 3.0L V6 with 300 horsepower and 295lb-ft of torque. Although the horsepower of the 300hp twin turbo V6 is down compared to the 2015 Q50 with the 3.7L V6, the additional torque of the new engine should make for a more engaging drive.

The Hybrid Returns
Finally, those 2016 Infiniti Q50 buyers who want the best fuel economy figures possible can opt for a similar Hybrid package to the one on sale today. This features a 3.5L V6 paired with a 50kW electric motor which offer combined figures of 360 horsepower and 258lb-ft of peak torque.

This Engine Could Power Some Coupes, Too
Infiniti noted that the 2016 Q50 sport sedan is the first vehicle to get the new VR twin turbo engine series, but it seems almost certain that this new engine family will quickly spread to the rest of the lineup.

The Infiniti Q60 coupe currently relies on the same 3.7L VQ engine as the 2015 Q50 sedan, so I have to wonder if the sporty little coupe won’t be the next product from Infiniti to get the 400 horsepower twin turbo engine. Of course, with Nissan owning Infiniti, I have to also wonder if the future Z sports car won’t also feature some form of this engine. Imagine a Nissan 400Z with the 400hp twin turbo V6. Yum.