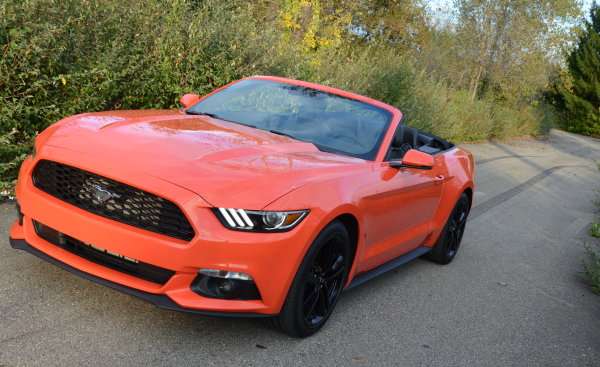 Now that the new Ford Shelby GT350 Mustang is reaching owners around the country, the members of the industry who are always asking what is next want to know what the Motor Company has planned for their hot-selling pony car – and today I take a look at what I think could be next.
Advertisement

The 2015 Ford Mustang has proven to be a smashing success, making 2015 the strongest sales year for the mighty Mustang since 2007 and the new Shelby GT350 has proven itself as the most track capable road-going Mustang or all time. With the GT350 being brand new, there likely aren’t any updates coming to the new Shelby Mustang and with the continued sales success of the “regular” Mustang – it is hard to see where the company could improve the current lineup. However, we all know that some light year to year improvements are imminent, so today I bring you what I think could be next for the Ford Mustang.

Ford Watches the Camaro
Now that the new 6th gen Chevrolet Camaro is reaching dealerships around the country, the Ford Mustang will get its first real challenge after dominating the segment throughout all of 2015. Ford will most certainly look at how the Mustang and Camaro sales numbers look through the 2016 calendar year while also taking a good look at the real world performance capabilities of the two cars when pitted head to head. Basically, once Ford sees just how good the 2016 Camaro really is, they will make adjustments to the Mustang accordingly.

Also, with the early success of the EcoBoost Mustang combined with the simple fact that the turbo 2.3L is such a great mill, I wouldn’t be surprised to see the V6 Mustang disappear in the near future. At this point, the only advantage that the V6 engine option has is the lowest purchase price in the lineup – but the EcoBoost is better in every way, so Ford would be smart to make the 2.3L EcoBoost the new base model engine in the near future.

Look for a Big Power Mustang
While Ford clearly went a different direction with the new Shelby Mustang – opting for a road handling monster rather than a straight line, high horsepower beast. However, muscle car people will still demand a Mustang from Ford which will probably compete with the likes of the Dodge Challenger SRT Hellcat. It is expected that Chevrolet will roll out a new Camaro ZL1 with the supercharged LT4 from the Corvette Z06 and should that come to volition, the Mustang will be the only modern muscle car without a true high power option.

I don’t believe that Ford would let the Camaro and Challenger fight out their own little phase of the horsepower war, especially with regard to an aspect of the segment which has always been so important. I do believe that we will see a modern variation of the Shelby GT500 with a high powered supercharged V8, but with Mr. Shelby’s passing and the continuing rumors that we could see a new Cobra or a new Mach 1, I wonder if the GT500 replacement might be called something other than a GT500.

In any case, I expect to see a proper high performance Ford Mustang in the next few years, at which point Mustang fans will have their chance to buy a factory stock pony car that will compete with Dodge’s Hellcat.

In short, the next few years should bring the Mustang GT a bit more power while the V6 Mustang will either get some significant upgrades or go the way of the Dodo. Finally, it shouldn’t be more than a few years before the Ford Mustang reclaims the GT500’s title of being the most powerful muscle car on the road.