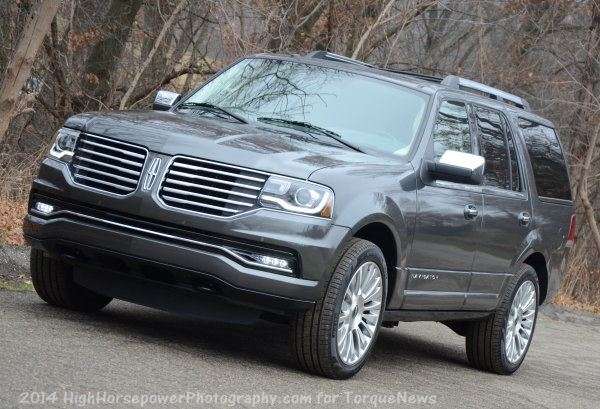 The 2016 Ford F150 Should Get the Stronger Lincoln EcoBoost V6

The 2015 Ford F150 features a 3.5L EcoBoost V6 that makes it one of the most capable and most efficient half ton trucks sold in America, but for the 2016 model year, the Motor Company should really introduce the 3.5L EcoBoost from the Lincoln Navigator to the F150 lineup.
Advertisement

When the new Lincoln Navigator was introduced with a retuned version of the 3.5L EcoBoost V6 with more powerful than the previous Ford F150 pickup with the same engine, it was widely expected that the 2015 F150 with the 3.5L EcoBoost V6 would pack the same power as the big luxury SUV. However, when the specs for the new F150 were announced, the biggest EcoBoost option receives the same power ratings as the 2014 models. Were I a betting man, I would expect to see the Navigator EcoBoost V6 in the F150 for 2016.

The 2015 3.5L EcoBoost V6
The 3.5L EcoBoost V6 is among Ford’s most popular motors, serving as the premium drivetrain option in the Ford F150, the Ford Taurus, the Ford Flex, the Ford Expedition, the Ford Explorer, the Lincoln MKS, the Lincoln MKT and the Lincoln Navigator. The output has always varied a bit from vehicle to vehicle, but the version used in the F150 has always been the most powerful with 365 horsepower and 420lb-ft of torque. However, with the introduction of the refreshed 2015 Lincoln Navigator earlier this year, FoMoCo rolled out a new version of the 3.5L EcoBoost V6 that offers 380 horsepower and 460lb-ft of torque.

This 2015 Lincoln Navigator EcoBoost V6 allows the 6,000lb+ SUV to get away from a stop in a hurry, while also being able to comfortably tow 9,000 pounds. I would almost go so far as to call the 2015 EcoBoost’d Navigator fast and when you aren’t pushing it hard, the Navigator can top 20mpg on the highway. This new 3.5L EcoBoost V6 is impressive and it seemed like a no-brainer for the newly released next generation F150 to get this new EcoBoost, but when the specs for the 2015 F150 3.5L EcoBoost were announced, it got the same 365 horsepower and 420lb-ft of torque as the previous models.

The 2015 Ford F150 with the available 3.5L EcoBoost V6 with 365hp and 420lb-ft of torque is still one of the most powerful and most capable trucks in the half ton segment while also being one of the most fuel-friendly gas-powered pickups, so it really doesn’t NEED the added power. At the same time, if Ford has the same engine that 15 extra horsepower and 40lb-ft more torque, why wouldn’t they be using it in a vehicle as important as the 2015 F150?

Why the Wait for the Beefier EcoBoost?
The automotive industry is all about getting everyone to talk about your products, and that includes both the media and the people buying the vehicles in question. With the 2015 Ford F150, there were a great many “big stories” within that one vehicle. It was the first of a new generation, introducing a bold new style. It was comprised heavily of aluminum. It featured a new 2.7L EcoBoost v6 that would make it the most efficient gas-powered truck in the half ton segment. Finally, it packed a slightly revamped 5.0L V8 that is the strongest in the lineup in terms of payload capabilities.

In other words, there were so many new and improved aspects of the 2015 Ford F150, that the company was smart to save something for later on. Ford has done this in the past when rolling out a new generation of a popular product, holding back on drivetrain changes for the following year and letting people focus on the new version rather than a new engine. Afterwards, Ford would then roll out improved drivetrain features that would get everyone talking about them again once the focus on the exterior design discussions have gotten old.

Right now, everyone is talking about the new aluminum body of the 2015 F150 and the super-efficient 2.7L EcoBoost. By the time the 2016 models reach showrooms, we will have all gotten tired of questioning the aluminum body, the new exterior design and the new fuel-friendly 2.7, so we will need something new to discuss. I expect that something new to discuss will be the Lincoln Navigator’s 3.5L EcoBoost V6 under the hood of the 2016 F150 – a move which will make it even more capable in addition to being more powerful.