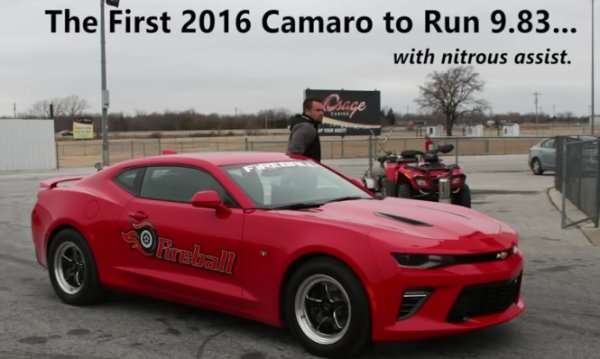 The 2016 Chevrolet Camaro SS has only been reaching dealerships for a little over two months and already we have one that has blasted down the quarter mile in the 9-second range – and the “Fireball” Camaro’s record run was caught on film for unquestionable proof.
Advertisement

Over the past few months, we have watched the 2016 Chevrolet Camaro SS hit the track in stock form with runs in the low 12s, quickly followed by more videos showing the 6th gen Camaro cranking into the 11s and then the 10s. Now we have a video of what is said to be the first 2016 Camaro SS to break into the 9-second quarter mile range and it was done with a relatively short modification list. In other words, expect to see plenty more 9-second 2016 Camaro coupes in the coming months.

The B&R Fireball Camaro
This 2016 Chevrolet Camaro SS is named the Fireball Camaro, and it was built by the folks at B&R Performance in Oklahoma. It is fitted with the 8-speed automatic transmission, skinny front wheels/tires, a set of sticky drag radials on race wheels and a list of engine upgrades to improve the output. B&R removed the stock LT1 heads and ported them for improved flow, adding a new BTR camshaft, an MSD intake, long tube headers, a Nitrous Express plate kit with 150hp jets and a proper engine tune to bring it all together.

When that power is coupled with sticky tires, good air and a good driver, it allows the 2016 Camaro SS to blast down the quarter mile in the high 9-second range. To be exact, the Fireball Camaro on the bottle ran a stunning 9.831 at 137.92 miles per hour. Even without the bottle, the Fireball Camaro is mighty quick, running a 10.95 on an all-motor run.

Since the mod list is surprisingly short, some people are wondering why we aren’t seeing more 9-second 2016 Camaros popping up online. Keep in mind that right now, many of the drag strips around the United States are closed for winter. Once we get into the early spring and tracks along the east coast open up for 2016, I would expect to see an explosion of crazy-quick 6th gen Camaros showing up all over the internet.

In the meantime, check out the video of the B&R Fireball Camaro as it makes the historic 9-second quarter mile run.

Tesla Contemplates A New Strategy for China Retail even As Sales Boom
Jay Leno on Elon Musk & EVs: “I Think He Should Get ... Credit"
END_OF_DOCUMENT_TOKEN_TO_BE_REPLACED