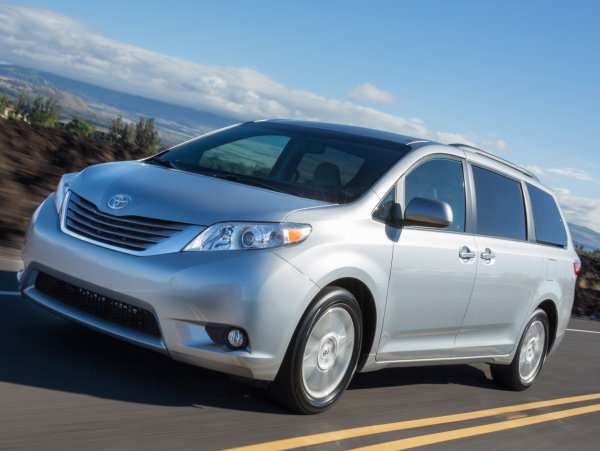 I recently had a chance to spend time in both the 2014 Toyota Sienna and the 2015 Toyota Sienna, and while these two minivans don’t look at that different from each other – the 2015 Sienna is more like a Lexus in the level of sound quality than it is like the 2014 Sienna that it replaces.
Advertisement

When I got to media launch events, it is inevitable that the PR people will talk about how they did this, that and the other thing to make the vehicle quieter when riding inside so when I heard that part of the discussion at a recent media drive for the 2015 Toyota Sienna, I can of brushed it off. Literally every product presentation I have heard in the last five years has included a portion about how they have reduced interior noise levels through thicker glass, new welds, new sound insulation and a host of other changes. In most cases, those changes are so slight that you can only detect them with a gauge that measures sound levels, but the 2015 Sienna is different.

When I went from first driving the 2015 Toyota Sienna for a day to driving the 2014 model for a day, I was blown away at how much quieter the new model is when driving around town and on the highway. This new minivan isn’t just a touch quieter than the outgoing models – it is “wow” better. The new Sienna is so quiet inside that if you went from riding blindfolded in a 2014 Sienna to a 2015 model without knowing what you were riding in shy of the fact that it was a Toyota Motors vehicle, you might guess that it was a Lexus and not a Toyota. It is that quiet.

Changes to the 2015 Toyota Sienna
When the folks from Toyota introduced my group to the 2015 Sienna, they talked about a great many changes for the new model year that would make it much, much quieter when on the road. Toyota engineers have added a new floor insulation system that cover 20% more of the floor, uniquely designed engine mounts, an acoustic windshield on higher end models (my test vehicles were XLE models), a new dash silencer and 142 new welds that improved body rigidity as well. These changes are all made in order to offer improved NVH (Noise, Vibration and Harshness) levels and these are the kinds of things that I hear about all of the time. However, in this case, they do make a remarkable difference in terms of interior noise levels in every driving situation. Functionally, the 2015 Toyota Sienna is very similar to the 2014 models of the same trimline. They both offer the same roomy interiors that offer comfortable seating for 6 adults (yes, even in the rear-most seats) with a good amount of cargo space and when you get to folding down the rear seats, the Sienna offers a tremendous amount of cargo space…but you would expect all of that from a minivan. Also, while the 2015 Sienna packs a new system that allows the driver to broadcast his or her voice through the sound system, both the 2014 and 2015 model year Sienna has a solid, easy to use infotainment system that includes an equally user friendly navigation system. I still don’t like that there is no dedicated navigation button on the infotainment system, but that is really a minor gripe with an otherwise very good system. The 2015 Sienna also has a new and improved climate control system that looks better and is easier to use.

Finally, the 2015 Toyota Sienna gets new surfaces throughout the cabin that provide a far stronger “high end feel”. These don’t improve the level of NVH at all, but there is no question that the newly leather wrapped dash, center console cover and door panels improve the overall quality of the Sienna experience.

The Result of These NVH Changes
All of those expected aspects are great, but what really makes the 2015 Toyota Sienna stand out to me was how quiet it was in all driving situations. Whether I was driving on the highway where wind noises are impossible to ignore to traversing rough roads with pot holes that echo through the cabin, the 2015 Sienna was whisper quiet compared to the 2014 models. I should point out that the noise levels of the 2014 Sienna are in no way extreme for a minivan – the 2015 Sienna is just that quiet inside. This new minivan is literally as comfortable and quiet even on rougher highways with heavy winds as some new Lexus models and when you consider how much I am impressed by the current Lexus lineup – comparing the 2015 Sienna to any of those vehicles should be taken as a huge compliment. Both of my Toyota Sienna test vehicles were equipped with the powerful 3.5L V6 and the segment exclusive all-wheel drive system, but you only really notice the engine in the 2015 Sienna under hard load and unlike some other AWD models on sale today that are stiffer and slightly less comfortable than their non-AWD counterparts, the AWD 2015 Sienna offers a wonderfully smooth ride around town and out on the open road.

Sienna Continues to Grow in the Segment
While many automakers have gone away from the minivan segment due to the negative stigma against these tried and true family vehicles, Toyota continues to improve their Sienna in what is still a very strong segment. The 2015 Sienna might not include a central vacuum system, but it does offer a level of interior comfort that is hard to find in this segment. In addition to being the only minivan with available all-wheel drive, these changes combined with the sharpened exterior design should most certainly help to grow Toyota’s market share of the minivan segment.