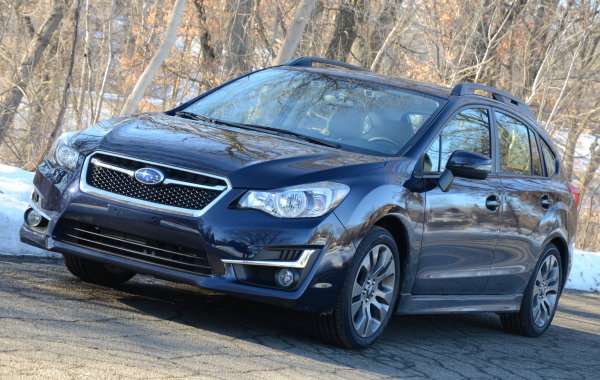 I recently had the pleasure of spending a week driving the Subaru Impreza 2.0i Sport and this efficient, surefooted compact hatchback exposes a major hole in the armor of the Detroit Big 3, as none of them offer an all-wheel drive car that is as affordable or as capable as the Impreza.
Advertisement

I had originally planned to use my time in the 2015 Subaru Impreza 2.0i Sport as half of a “Which to Buy” piece here on TorqueNews.com and since I focus on the Big 3, the Impreza would be compared side by side to a similar vehicle from General Motors, Ford Motor Company or the Chrysler Group.

The problem is that none of the brands from the Detroit automakers offer an all-wheel drive compact hatchback. General Motors has the Chevrolet Cruze and the Buick Verano, Ford has the Focus, and Dodge has the Dart. None of those cars are available with all-wheel drive and while the upcoming Ford Focus RS will have all-wheel drive, that will be far more expensive than the Impreza and available in far fewer numbers. Mind you, we are talking about the Subaru Impreza that has a price around $24,000 – not the high performance WRX STI. Also, only the Focus is available with the added space of the hatchback design, but still not without opting for the high priced RS package.

Really, the implementation of all-wheel drive in an affordable vehicle is an advantage that almost every Subaru product has over the majority of their competitors, but in terms of the C-segment sedans, there is truly no competitor for the Impreza.

American Competition for the Impreza
My Impreza 2.0i Sport test car had a base price of $24,090, including the $795 destination fee, while option package 23 added $2,795 to the bottom line – bringing with it a power moonroof, keyless entry, push button start, a premium infotainment system with navigation and the Subaru EyeSight driver assist safety system. The final price as tested for my Impreza was $26,885. This price includes heated front cloth seats with leather trim, 2.0L Boxer engine mated to a CVT automatic transmission, a rear view camera, a tire pressure monitoring system, power locks, power mirriors, automatic climate control and a sound system with HD radio, Bluetooth and USB connectivity. Click here for a closer look at some of the options that make this new Impreza stand out. The closest competitor from Ford is the larger Fusion SE, which offers optional all-wheel drive, but only with the most expensive engine option, so the base price is $29,310. However, if you want all of the features of my Impreza test car, the Fusion SE AWD price climbs to up around $35,000.

The closest competitor from the Chrysler Group is the Chrysler 200, which is in the same size class as the Ford Fusion – which is a step above the Impreza. To get all-wheel drive in the Chrysler, you have to opt for either the 200S or the 200C, both of which carry premium price tags starting right around $30,000. The major advantage of the 200S and 200C is that the 3.6L Pentastar V6 and 9-speed automatic transmission are standard for that price, packing big power and solid fuel economy in a midsized sedan. However, as is the case with the Fusion SE, getting all of the gadgets of my Impreza test car in the Chrysler 200S brings the price up quite a bit…this time to just over $34,000.

General Motors has the Buick Regal with all-wheel drive, but the Regal is the priciest of the three American sedans, running in the $36k range for similar options.

In other words, if you are looking to buy an all-wheel drive compact and the 2015 Subaru Impreza 2.0i Sport is on your short list, considering the least expensive possible options from Ford, Chrysler or General Motors will immediately set you back between $8-10k right from the get-go. Sure, all of those three American sedans offer more space for the money, but for someone who doesn’t need the extra rear seating space and who does want the added cargo space, the extra rear seating space doesn’t justify the added cost when compared to the Impreza.

Impreza Dominates in AWD Fuel Economy
While the 2015 Subaru Impreza has a big advantage in price, it has an even more substantial advantage in fuel economy. The AWD Impreza offers 27 miles per gallon in the city and 36mpg on the highway, so while it doesn’t tickle the 40 barrier like the American compact sedans, the Impreza numbers are excellent for a sedan with all-wheel drive.

Someone opting for the larger and more expensive Ford, Chrysler or Buick would have to face a major compromise in fuel economy, one that is to be expected when comparing a compact sedan to a midsized sedan. However, with no American all-wheel drive compact sedans, the only basis for comparison from the Detroit Big 3 are the Fusion, the 200S and the Regal. So, while Ford, GM and Chrysler will steer buyers who want an all-wheel drive car (not a crossover) to the larger sedans, those who want an all-wheel drive sedan with very good fuel economy will surely lean towards the Impreza. It should also be noted that if you want to spend even less, you can get into a base model Subaru Impreza with all-wheel drive and the automatic transmission for just $20,490, so if it is truly all about spending the least amount of money possible for an AWD car, the American automakers truly have no answer for the 2015 Subaru Impreza.

The Drive
So the 2015 Subaru Impreza 2.0i Sport costs less and it far more efficient than the closest competition from Ford, GM or Chrysler, but the Impreza is also a far more capable vehicle than are the Fusion, the 200S or the Regal. I have had the pleasure of driving all four of these vehicles in my area and in my area, I am privy to a great many unpaved “natural beauty roads”. These roads are groomed regularly, but they can still be particularly rough on most cars. While the Fusion, 200S and Regal with AWD all offer surefootedness in snowy weather, none of the American competitors offer the level of confidence that you get on these rough roads.

While the Impreza isn’t engineered with the same rally racing tradition as the high performance WRX, we should all keep in mind that Subaru’s experience in off road racing has led to a family of vehicles that are great on-road, but they are second-to-none when it comes to rough, unpaved roads. Where the ruts and grooves in the unpaved roads forced me to slow down to a crawl in the larger American sedans, the Impreza’s ride height and suspension setup allows the Subaru to comfortably breeze along these rough roads. If you spend any significant amount of time driving in rough, unpaved roads, the Subaru Impreza is a far better choice for you, but it should be noted that the off-road capable suspension doesn’t yield a rough ride on paved roads. Really, the ride quality of the Impreza 2.0i Sport is no worse than any of the top-selling compacts from the Big 3, but it also offers the ability to conquer the roughest dirt roads I could find. These are roads that I actively avoid when driving most cars, but the Impreza handled the dirt roads so smoothly that I wouldn’t think twice about taking these roads if I drove the Impreza every day.

In addition to being great on unpaved roads and smooth on paved roads, the 2015 Subaru Impreza offers surprisingly sharp handling capabilities, so whether you spend a great deal of your drive time on the highway or on tight country roads, the Impreza is a fun drive.

The Final Word
In a normal “Which to Buy” comparison here on TorqueNews, this is the part where I would say which types of drivers are best suited for which vehicle, but in this case, if the capabilities of the 2015 Subaru Impreza 2.0i Sport hatchback fit your needs, there is truly no car from GM, Ford or Chrysler which can rival the Impreza for anywhere near a comparable price. Considering the lead that the Detroit automakers have in many segments here in the US, it seems odd to think about the fact that among Dodge, Chrysler, Fiat, Alfa Romeo, Ford, Lincoln, Chevy, Build and Cadillac there are no compact cars with a hatchback design and all-wheel drive without climbing into the high end, high performance segment of the Focus RS. If nothing else, driving the Subaru Impreza when shopping for a new compact reveals how big of a hole the Detroit automakers have in their lineup when it comes to affordable, efficient and surefooted all-wheel drive models.

For a full review of the 2015 Impreza 2.0i Limited from our Subaru guru Denis Flierl, click here!

JGinNJ wrote on July 15, 2015 - 5:22am Permalink
Nothing wrong with the Impreza that can't be fixed with a larger engine.
Dave Suton wrote on July 16, 2015 - 12:02am Permalink
Of course, the Big Three don't make anything as Fugly as subarus either.
Billb wrote on July 29, 2015 - 6:23am Permalink
If only subaru sold a sporty hatchback. There's nothing to compete with the BMW 1 series, ford focus st, or golf GTI. Sad to see subaru leave the sporty awd for outdoor enthusiasts. Now I have to give up the hatch back space, put up with a rather low end/slow crosstrek, or upgrade to a huge forester. Sadly the forester has gotten rather large and heavy, the cross trek is closer in size to my current forester than the new forester. Am I really alone in wanting a sporty practical hatch? Seems weird, just as the hatch market heats up (bmw 1 series, focus RS, golf R), subaru leaves it.