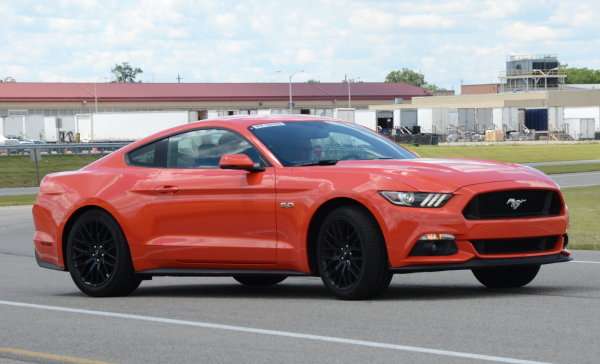 This is not an April Fool’s Day joke – the 2015 Ford Mustang outsold both the Chevrolet Camaro and the Dodge Challenger combined in March 2015, posting the best March sales since 2007 and the best overall sales month for any muscle car in the past 4 years.
Advertisement

The 2015 Ford Mustang has been populating dealerships around the country over the past three months and with a combination of more vehicles on lots and the warmer weather around the country, new Mustang sales absolutely exploded in March 2015. I have been covering the monthly sales race between the Ford Mustang, the Chevrolet Camaro and the Dodge Challenger since late in 2011 and in that time, none of the American automakers have sold as many muscle cars in one month as Ford sold in this March.

I keep a spreadsheet of muscle car sales each month and going back to late 2011, the most muscle cars sold by one company in a single month was the Mustang in May 2012, when 10,437 units were sold. The most Camaros sold in a month in the past few years came in May 2014, when GM sent out 10,340 new Chevy muscle cars.

Mustang Crushes Camaro
While record sales numbers for the 2015 Ford Mustang are good, what makes the March sales numbers even better is the fact that they came in a month where the Camaro saw incredibly low figures. GM sold just 5,9,56 Camaro coupes and convertibles last month, trailing the Mustang by over 6,700 units.

In most months over the past few years where one of the American muscle cars sold very well, the closest competitor usually had a strong month as well. However, with this Mustang sales boom coming from new generation models, the Camaro had a very poor month compared to March sales in 2012, 2013 and 2014. In fact, even the Dodge Challenger posted strong sales numbers in March 2015 with 6,110 new Mopar muscle cars sold, coming just 22 units shy of monthly sales record for the modern Challenger. So while things were very good for both Ford and Dodge, Chevrolet was the only muscle car builder to post poor sales last month.

Annual Sales Lead Grows
The Ford Mustang has posted very strong sales through the first three months of 2015, moving a total of 29,811 cars during the coldest months of the year. It took Ford well into May to sell that many Mustangs in 2014 and in leading each of the first three months in the muscle car sales race, Ford has already built a huge lead in the annual muscle car sales race. GM has delivered just 17,320 new Camaros in the first quarter, so the Mustang has an early of almost 12,500 units in 2015.

As the weather continues to warm up around the country, we can expect to see sales of all of the American muscle cars continue to rise, with the Ford Mustang and Dodge Challenger also benefitting from the new model surge. Numbers will almost certainly improve for the Camaro, but if things don’t approve for the Chevy muscle car quickly, the Mustang might build a lead that is too big for the Camaro to close when the 2016 Camaro drops later this year.

And to think, plenty of people were sure that the 2015 Ford Mustang would fail due to its extensive redesign.

greg wrote on April 1, 2015 - 9:30pm Permalink
yes thank you.
Keilum wrote on April 2, 2015 - 4:24pm Permalink
Its cause of the new body style change. Happens every time one of them changes styles. Truth of the store is ford finally beat someone in sales for ONE month. Why is Chevy not getting an article or dodge every month they have beaten ford. Cause its no shock.
ohiodale wrote on April 6, 2015 - 2:06pm Permalink
Ford has beat Camaro sales half a dozen times before the redesign. Ford has the top selling vehicle in the US so I think they are used to beating Chevy and yes it is big news. The Camaro has the same issue the Mustang had a few years ago. When the 5th generation Camaro was released, most people who wanted the Mustang already had one. The Camaro wasn't sold for 5 years so plenty of buyers. People keep their cars 10 years so over the last 4 or 5 years people who wanted a Mustang were already driving a 2005 or beyond Mustang. Now it is time to trade them in again. Why do you think Ford waited 10 years for the redesign, This was not by chance.
greg wrote on April 3, 2015 - 10:12pm Permalink
Well that's the same reason the Camaro was outselling the Mustang. When the Camaro finally came back on market after saying goodbye in 2002 Camaro fans were more than ready to buy the NEW Camaro. I've owned Camaro's in the past, the first 4 generations, but I still prefer the Mustang. The 2014 1LE I had on load for a month showed me that GM still goes cheap in the interior and poor interior design. I bought a 1991 Camaro 1LE-R7U GM Motorsport car brand new, which had all sorts of issue's. The weak T5 trans couldn't even handle normal street driving. The interior knobs and switches in the 91 were the one's I remember from the 70's. I've been lucky enough to have owned all brands of ponycars from the 60's, but their is only one original ponycar. Hope the new 2016 Camaro can improve their sales. GM Canada has been offering 0%-84 month financing on the Camaro for over 8 months, but that still hasn't improved sales. A new model is not the only reason why sales improve.
Ed Moffett wrote on April 4, 2015 - 6:33pm Permalink
The new Camaro is coming out soon. Production is ramping down on the current model.