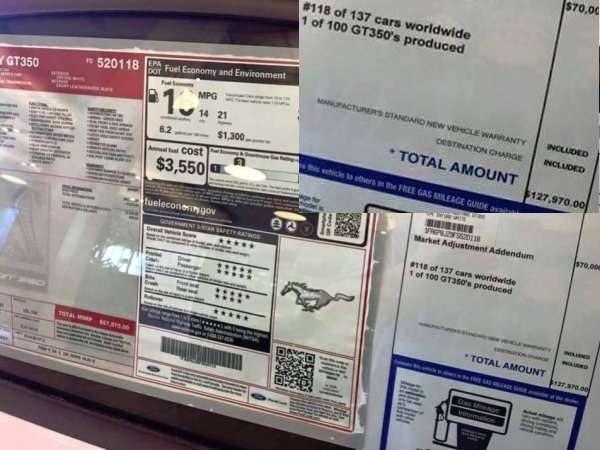 A picture came across my desk today, showing what appears to be a window sticker for a 2015 Ford Shelby GT350 Mustang with a dealership markup of $70,000 – bringing the total purchase price to almost $128,000.
Advertisement

I want to start by saying that Im not sure where this image originated, but it has shown up on a handful of General Motors and Chrysler Group Facebook groups today, with fans of the other brands making fun of the fact that this particular 2015 Ford Shelby GT350 Mustang has a sticker price of $127,970. You cannot see the name of the dealership so there doesn’t seem to be any way to verify this price tag as being legit – but it certainly looks like an unaltered image of a new Shelby Mustang sporting a $70,000 dealership markup.

The 2015 Ford Shelby GT350 Mustang
The new Ford Shelby GT350 Mustang was introduced for the 2015 model year as a very limited edition, with 100 units made of the GT350 and 37 units made of the higher performance GT350R. This gives the collectors some special cars to go after while those prospective GT350 buyers who will actually drive and race the cars can hold off for the 2016 models – which are already here.

You cannot argue that Ford knew that the 2015 Shelby GT350 Mustang would be an instant collectible and due to the extremely limited numbers, Ford knew that there would be massive markups, but a $70,000 markup lifts the cost of this car from $57,970 to $127,970.

The price tag is cut off on the left, so we cannot see which options have been added to this 2015 GT350 Mustang, but with the base price starting at $47,795, we know that there are some options piled on – presumably the $7,500 Technology Package, blue stripes on the Oxford White body, the fitted car cover, and the painted black roof. We can also see that this car is #118 of the 137 made, so it is very well appointed and numbered, but it is still very hard to justify a markup that more than doubles the price of the car.

What I really believing is happening here is a dealership has taken delivery of 2015 Shelby GT350 Mustang #118 and rather than selling it, they have applied a massive markup to deter people from buying it. This way, it sits on the floor and brings in foot traffic, while those prospective buyers who want to buy a new GT350 can order a 2016 model for a fraction of the price.

The markup might seem insane, but for a dealership using this car to bring people into the dealership – this $128k GT350 could be helping them sell 2016 Mustangs.