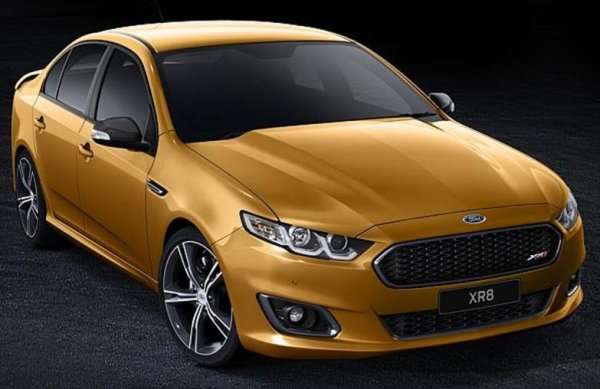 A 2015 Ford Mustang Sedan Would Look A lot Like This

The Australian market Ford Falcon has been a performance mainstay for years Down Under and while the Falcon is about to meet the end of the line, the Motor Company has decided to give it one final refresh up front – giving those “Mustang sedan” rumor-writers a vision of their dream car.
Advertisement

For years now, the Mustang community occasionally stokes up the discussion of a 4-door version of the fabled Ford Mustang. While it is nothing short of blasphemy to most Mustang lovers, some see the real market space for a rear wheel drive Ford performance car which could or could not be called the Mustang. Those who push these rumors insist that the Dodge Charger is a good example of what the Mustang sedan would be and while the Ford Taurus offers somewhat comparable performance with the SHO model – it’s just not the same.

What some of these folks don’t seem to know is that Ford Motor Company has been making a car that rivals the Dodge Charger across most of its trimlines – it just hasn’t been sold in the USA. That car is the Ford Falcon and while this has been a popular performance models Down Under for decades, it will soon meet its demise. However, Ford isn’t sending the Falcon into retirement with a grand exit, giving the powerful sedan one last refresh with a look that is very much like much of their lineup and in doing so, the final Falcon offers us a fleeting look at what the Mustang sedan could be.

The 2015 Ford Falcon XR8
Information on the 2015 Ford Falcon is short, but Ford of Australia has issued up the image above and a handful of basic details on the XR8 model. This will likely serve as the top of the line model and it will be powered by a supercharged 5.0L V8, but it probably won’t pack the power that some American Mustang fans are imagining. The Ford Racing supercharger package for the 5.0L-powered Mustangs offer up to 624 horsepower, but power figures for a supercharged V8 Falcon XR8 will likely be more comparable to the output of the 2015 Mustang GT.

In regards to the final Ford Falcon XR8 looking like the 2015 Ford Mustang up front, the similarities begin with the six sided upper grille and the sharp, angular lower grille that “flows” down from the top opening. The design isn’t quite the same as the 2015 Mustang, but when you combine the shape of the upper/lower grille with the angry looking, LED lined angular headlights, the hood with a raised center section and – of course – the fact that it is rear wheel drive and powered by a V8 engine.
Yes, calling the Ford Falcon XR8 a 2015 Mustang sedan is a stretch…but the suggestion of a Mustang sedan itself is a big stretch. The proportions aren’t the same on the Falcon and the design isn’t identical – but this is likely the closest those people who want a Mustang sedan will ever get to the real thing.

A RWD Ford Sedan Could Be Awesome
While I do not in any way support Ford building a 4-door version of the mighty Mustang, I do see the place in the American market for a performance minded rear wheel drive sedan. The Dodge Charger is really the only American option for a rear wheel drive sport sedan with a collection of engines ranging from the fuel friendly 3.6L Pentastar V6 to the 475 horsepower Dodge Charger SRT (and perhaps soon a Dodge Charger Hellcat with 700+ horsepower). The Charger is one of the Chrysler Group’s bestselling cars so it is impossible to argue with the spot in the market and the Charger offers strong performance with the same engines as what are offered in the Dodge Challenger. There is also the Chevrolet SS performance sedan, which is only available as a high performance model so it has less impact on the segment - but that leaves Ford as the only American automaker who doesn't have a RWD sport sedan threat.

Were Ford to come up with a rear drive sedan that used the Ford Mustang drivetrains –but not the Ford Mustang name – the company could have themselves a performance sedan to challenge the muscular Dodge Charger.

I wouldn’t count on it…but it would be cool to see a Ford competitor for the Charger.

Emph66 wrote on July 26, 2014 - 1:06am Permalink
Terrible! Not a Mustang.
John Zelcs wrote on July 31, 2014 - 6:10pm Permalink
The Shelby P V12 was a great example of... an M5 rival! Shelby is NOT a tuner. It built the GT500 from 2005 to 2014 which Ford called, "the most powerful production V8 in the world", which, of course, isn't anymore. The Dodge Challenger SRT Hellcat takes over that phrase.
Emph66 wrote on August 1, 2014 - 12:30am Permalink
Ford built and designed all the GT500's from 2005-2014. The Shelby name was licensed from Shelby American for these models but they had no direct input into the design. The 2014 is still the most powerful production V8 currently available and will be until the Hellcat is released. This title will likely be short-lived as plans are already underway to build a GT500 using the new Mustang S550 chassis which which will have more horsepower than the Hellcat. How much more is not clear, but it will be more and in a much lighter chassis allowing it to easily outperform the Hellcat.
3rd grade teacher wrote on June 28, 2015 - 11:37am Permalink
There was never a "P V12." I am guessing you meant the CV525; yes, about 525 production units were built, with 10 sold to the public.