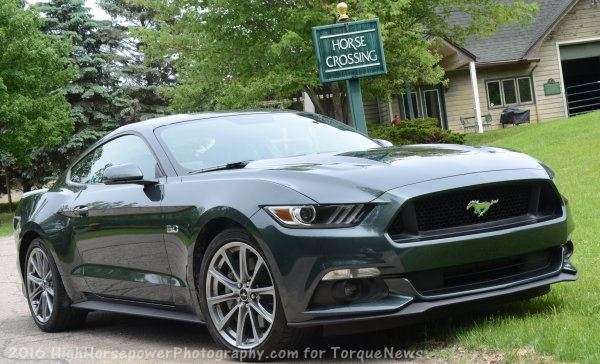 Ford Performance will soon begin offering “Power Packs” for the 2015-2017 Ford Mustang GT, with varying levels of performance increases with the different packages – and a peak increase of 60 horsepower with the top of the line package.
Advertisement

Tuning packages have become very popular in the modern performance world and while some automakers are making moves to make it harder to add power to their new vehicles via a simple ECA tune – the folks from Ford Motor Company are staying ahead of the curve by offering their own ECU tuning options. Best of all, Ford has paired the ECU tuning kit with varying other performance upgrades to create three different packages and three different levels of performance upgrades.

These kits are specifically for the 2015 and newer Ford Mustang GT with the 5.0L V8 engine and the first package is expected to go on sale on or around August 1st, while the others are expected to arrive later this fall.

Ford Performance Power Packs
Ford Performance is offering three packages for the 2015-2017 Ford Mustang GT, simply named Power Pack 1, Power Pack 2 and Power Pack 3. In every case, the driver will need to buy at least 91 octane gasoline, but that is a small price to pay for the emission-approved power packages.

Power Pack 2 for the Mustang GT adds the cold air intake setup from the new Shelby GT350, an 87mm throttle body and an intake manifold adapter for the new throttle body. This kit adds 21 horsepower and 24lb-ft of torque over stock, resulting in a total system output of 456 horsepower and 424lb-ft of torque. This package has an MSRP of $949 and Ford plans to ship this by the end of September.

Power Pack 3 for the 2015-2017 Ford Mustang GT adds the same GT350 cold air intake and throttle body from the stage 2 kit, but Power Pack 3 also adds the intake manifold from the GT350. There is no torque increase figure, but we know that this package adds 37 horsepower for a total of 475 peak horsepower. Also, at 7,500rpm, Power Pack 3 adds 60 horsepower over the stock power figure at that point in the power band. This package has an MSRP from Ford Performance of $2,395 and they plan to begin shipping by October 30th.

50 State Legal
I imagine that there are plenty of people reading this, thinking that 37 horsepower from a $2,400 build seems low and that their local tuning shop could make more power from the 2015+ Mustang GT for less money. They would be right, but it should be noted that these performance packages are legal in all 50 states. That’s right – the 475 horsepower package is even legal in California, so no matter where you live in the USA, you can purchase any of these three packages and enjoy the extra power without any concern of failing your local emission tests.