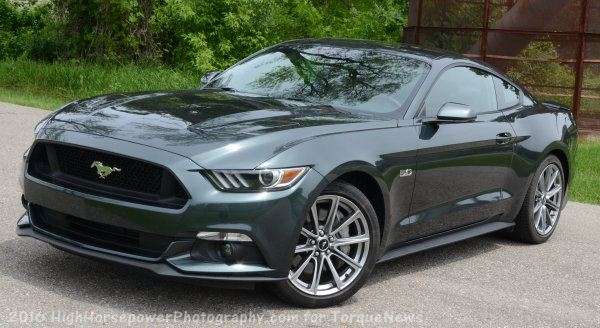 Ford Motor Company has issued a recall for the 2015 Ford Mustang fastback along with a handful of other Ford and Lincoln vehicles from the 2013 through 2016 model years in areas around the US with the highest temperatures – affecting roughly 830,000 vehicles in 16 states.
Advertisement

Ford Motor Company has discovered a problem with the door latch assembly in select vehicles from the past few model years, including the 2015 Ford Mustang fastback, the 2013-2015 Ford Focus, the 2013-2015 Ford Escape and a few other low volume models. Interestingly, this recall will only apply to vehicles located in select areas around the country where ambient air temperatures are, on average, the highest in the country.

The Door Latch Recall Explained
Ford engineers have discovered that when the door latch assemblies of the 2015 Mustang and the rest of the vehicles listed below are exposed to long periods of very high temperatures, there is a small component inside of the latch assembly called the pawl spring tab which is more prone to breaking. Should the pawl spring tab break, the door latch will not secure the door in place, allowing the door to fall back open.

This problem is most likely to happen when the owner of the Ford Mustang or one of these other Motor Company vehicles slams the door shut, so in those cases, it is more of a painful inconvenience than a safety issue.

However, if the tab breaks in a fashion where the driver or passenger of the Mustang is able to get the door to seem like it is properly latched – the door could call open when the vehicle is in motion. That creates a far greater safety risk and unfortunately, Ford has received reports of one accident and one injury which could be related to this recall.

The key factor to this recall is a high ambient temperature, so the vehicles recalled are only those which are or have been registered in select states with hotter climates. Right now, those locations are limited to Alabama, Arkansas, Arizona, California, Florida, Georgia, Hawaii, Louisiana, Mississippi, New Mexico, Nevada, Oklahoma, Oregon, Texas, Utah and Washington.

The Fix
To solve this problem, the Ford dealership will replace the door latch assembly with a new unit, presumably with a pawl spring tab which is more resilient in high temperatures.

Angie Kirby wrote on October 10, 2017 - 2:28pm Permalink
My passenger door has come completely open. The ford dealer told me there was a recall on the latches. Not only did they do the recall work but they destroyed my interior doing the replacement, resulting in a new passenger seat and new passenger door panel. The did the recall worked and my passenger door is still randomly coming open. Last time it come open was 2 weeks ago at 75 miles per hour on the interstate. I was really hoping on a buy back option but was told I didn't qualify. I read Louisiana's lemon law and it states " any life or death situation" is a buy back option. I do not know why ford turned me down. I guess they are waiting for some one to fall out of my car.