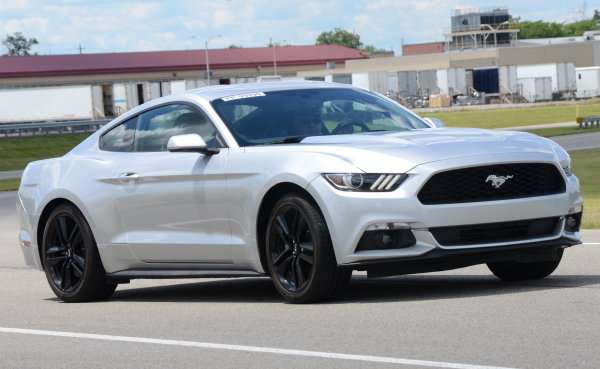 November 2014 was really the first full month of sales for the 2015 Ford Mustang and the new pony car is already facing its second recall, as Ford is now recalling the 2015 Mustang EcoBoost over a concern that the fuel line could leak and that could lead to a serious fire.
Advertisement

For the second time in the two months since the new 2015 Mustang has been officially on sale and in dealerships, owners of the next generation pony car are facing a safety recall. The first recall was fairly minimal with just 53 units to be affected and with that first recall stemming from a seat belt buckle issue, it wasn’t all that serious of a recall.

Unfortunately, this new recall is far more serious and it affects a bigger batch of vehicles, as Ford Motor Company has some concerns about the fuel line system in the 2015 Mustang EcoBoost.

2015 Mustang EcoBoost Fuel Line Recall
The newest 2015 Ford Mustang recall pertains specifically to those cars equipped with the new 2.3L EcoBoost 4-cylinder engine, specifically those units built between September 25, 2014 and October 9, 2014. In total, 728 EcoBoost’d Mustangs are affected with 712 in the US and 16 in Canada.

In these new EcoBoost Mustangs, Ford Motor Company believes that the fuel pressure sensor may have been installed incorrectly. The fuel pressure sensor is part of the high pressure fuel feed system and if the sensor is installed incorrectly, it could become loose enough to leak. Since it is a pressure line, the leak likely will be more of a spray than a dripping leak, so a leak in this portion of the fuel line could lead to a very serious fire in the 2015 Ford Mustang.

Fortunately, Ford has no reports of any real world fires occurring because of this problem, but with any risk of fire in the 2015 Mustang, the Motor Company is making the quick call to get them back to the dealerships before any owners have to deal with this problem on their own.

A Simple, Quick Fix
The best news is that there have been no reports of real world fires in the 2015 Ford Mustang EcoBoost as a result of this fuel line fire, but there is more good news – the fix should be quick and easy. Ford has said that dealerships will replace the portion of the fuel feed assembly and this work will be done at no cost to the customer.

Ford has been working to contact the owners of the 728 troublesome EcoBoost Mustangs, but any owners of the 2015 Mustang with the EcoBoost engine can call Ford customer service at 1-866-436-7332 for more information.

While some people may ignore safety recalls, this newest 2015 Ford Mustang recall is not one to be ignored. Even though there have been no reports of fires stemming from the fuel line issue, the nature of this problem could create a very serious fire hazard should the pressurized line fail. It is free – let the dealership fix your Mustang EcoBoost when you get the notice.

Alexi44 wrote on December 5, 2014 - 8:02am Permalink
This is the only 2015 Mustang recall and I am glad they caught it early enough. Also it's very good there are no injuries involved.
Bruce62 wrote on December 5, 2014 - 11:03am Permalink
Sounds like another Ford Pinto to me,....
JeffS wrote on December 6, 2014 - 3:26pm Permalink
When considering the complexities of new vehicles these days it's pretty amazing that more problems like this do not rear their head. At least Ford is recognizing the issue early on enough that it makes economic sense for them to address it immediately instead of having several thousands of cars out there with the problem. When that happens the bean counters often see a relatively few lawsuits as the more prudent choice, economically speaking, than to spend the enormous amount to fix the problem. Hopefully the urgency to address these kinds of problems, throughout the industry, will help avoid heartache and misery of the Drivers who purchase a vehicle that has a design flaw or mfg. problem that could cause allot more than financial hardship. Seems Ford is trying to do the right thing.