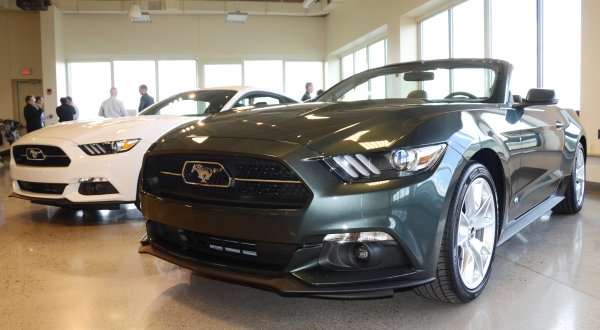 2015 Ford Mustang Coming to a Dealership Near You Next Month

The 2015 Ford Mustang has been arguably the most popular topic in the American auto industry since it was introduced around the world last December and after fans have read about it online and in magazines, seen it at big auto shows and obsessed about it on social media – the next generation pony car will finally be arriving in your local dealership next month.
Advertisement

Since Ford Motor Company introduced the all-new 2015 Ford Mustang back on December 5th 2013, fans have been clamoring to get their hands on the next generation of American performance. While there are several American performance cars that are known around the world for their historic levels of performance, no other car has lasted as long as the mighty Mustang* so the arrival of a new Mustang – which has only happened a handful of times in the last 50 years – is a very big deal to lots of people.

Fans of the Mustang and fans of the performance car world in general have flocked to major auto shows like Detroit, Chicago and New York to see the 2015 Mustang under the bright lights while other folks have relied on smaller events or massive public events like the Woodward Dream Cruise to see the next generation pony car in person. That is great for those people who just want to see the 2015 Mustang, but for those who have their heart set on seeing one in a showroom before buying one, it has been a long wait. Fortunately, that wait is finally almost over as every Ford dealership in the United States (or at least the vast majority of them) will be getting their first 2015 Mustang within the next month or so.

The 2015 Mustang Arrives – But You Still Want to Preorder
The 2015 Ford Mustang is expected to finally reach dealerships around the United States in October so those folks who haven’t gotten to see one in person at a big event will finally get to meet the next generation Mustang face to face. This will also mean the first chance for many consumers to test drive a 2015 Mustang and that will almost surely lead to an even bigger influx of sales, but you probably shouldn’t expect to walk in off of the street next week and buy a 2015 Mustang. Unfortunately, the vast majority of the first units will likely be pre-ordered so those models hitting dealerships will either be earmarked for a certain person or snatched up right away once the dealership knows exactly what they are getting. There is also the possibility that dealerships will have one that they want to hold onto for prospective customers to drive, which could lead to those folks custom ordering a Mustang from the factory.

In either case, there is a good chance that if you walk in off of the street next month when you see the first 2015 Ford Mustang in your area, you won’t be able to buy it. If you really want to buy a 2015 Mustang as soon as possible, it is best to head to your local dealership and place an order for one with every option that you want.

We are sure to see a flood of 2015 Mustang coupes and convertibles over the next few months that will guarantee plenty of them on dealership lots to drive and buy before Christmas – but expect the first units to be hard to acquire unless you have already made plans with your local dealership.

*Note: Before all of the Corvette fans start writing in, insisting that the Corvette is the longest running car in America, I should remind you that there was no 1983 Corvette. The Mustang has never taken a break for any reason.

L Jay Cee wrote on September 23, 2014 - 11:58am Permalink
The Camaro took a production break. Not the Corvette. The 1982 model was extended to the end of the1982 year. 100 new model 1983 Vettes were built. All but one were destroyed because of poor quality issues. The sole1983 survivor is in the Covette museum. Production had a mere couple months to retool. Even though they were made in 1983, the laws stipulated the cars be deemed 1984. So the 1984 model production year was much longer than usuaul. If the same laws were around in April 1964 the Mustang would have been a 1965 and not a 1964 1/2. I would not consider re-tooling a factory taking a break.
Andrew wrote on September 24, 2014 - 3:24pm Permalink
1964 1/2 is a colloquial term used by nostalgists and aficionados to describe the first wave of Mustangs released in early 1964. While people who know their stuff can tell them apart from the later 1965 vehicles, they were in fact all titled as model year 1965 Mustangs. No Corvette was ever titled as a 1983 model year and there was never any intention of releasing a 1983 Corvette as Chevrolet could not get UAW agreement nor the capital expenditure in place in time for the retooling. The story of the sole 1983 Vette is a fraud - that car is just a pre-production test vehicle. If that vehicle is a 1983 then every model car ever made has many mysterious “preemies” with too soon birth years.
TD wrote on September 24, 2014 - 2:39pm Permalink
Even though Ford built the 1st Mustangs early, they were still all 1965 models, all titled as such. Consumers came up with the 1964.5 moniker.