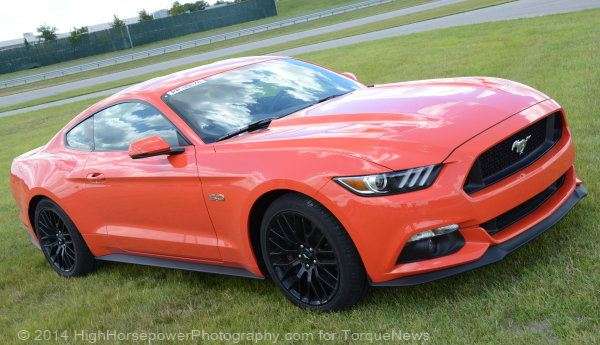 The new 5.0L V8 engine that will power the 2015 Ford Mustang GT will feature a factory forged bottom end and a reinforced engine block that could allow for quick and easy integration of a forced induction setup – allowing the newest Mustang GT to potentially pack over a thousand horsepower on the stock bottom end.
Advertisement

While the strength of the reinforced aluminum engine block is only a speculation right now, a very sturdy engine block could be the key to the 2015 Mustang GT offering monster power via the aftermarket. Many Mustang owners who are building their engines for big power swap to a forged crankshaft and forged connection rods, but going to a high strength reinforced engine block is often too entailed and too expensive for the average Mustang driver. If the aluminum block in the 2015 Mustang GT is as tough as the rumors suggest, it could allow owners to ‘safely’ make more power than any Mustang with a stock bottom end in the past.

Why 1,000 Horsepower Could Be Possible
Based on what we know right now, the 5.0L V8 engine in the 2015 Ford Mustang GT should be significantly stronger than the 5.0L V8 used in the previous Mustang GT. The 2015 5.0L V8 might only make 15 more horsepower than the 2014 5.0L V8, but consider this: the Ford Racing supercharger package for the 2014 Ford Mustang GT increases the output to 624 horsepower. Ford Racing wouldn’t sell a supercharger package that posed any real risk of breaking the engine after proper installation so we can call 624 horsepower a “safe” figure for the 2014 Mustang GT.

That package allowed for an increase of about 48.5% so if all else was equal – the 2015 Mustang GT with the Ford Racing supercharger package should enjoy at least 646 horsepower. If that is the same “safe” figure as it was for 2014 with the weaker bottom end, there is no reason that the safe number could be a touch higher. I wouldn’t be all that surprised to see Ford Racing roll out a package that allows 2015 Mustang GT owners to boast of having more power than the 707hp Dodge Challenger SRT Hellcat. Say that Ford Racing rolled out a package with 710 horsepower. Like the 624 package for the current Mustang GT, that would be a safe number with the new forged bottom end.

Also, it should be noted that the Ford Racing 624hp package for the 2014 Mustang GT only comes with the supercharger itself, the items needed for installation, a new throttle body, high flow fuel injectors, an intercooler and an engine calibration tune that brings everything together to make 624hp and 536lb-ft of torque at 9psi.

Were you to take a similar supercharger package and add it to the 2015 Ford Mustang GT, the tougher bottom end would allow you to safely run more than the 9psi. Were you to add some tricked out, high flow cylinder heads, a more heavily modified fuel delivery system, more boost and a more aggressive tune – you would certainly have no problem making way, way more than 624 horsepower and I don’t think that it would be out of the question for a fully built, blown top end on the 2015 forged bottom end to make in excess of 1,000 horsepower…and that is very, very exciting.

Bob-O wrote on September 7, 2014 - 7:07am Permalink
2014 GT's limiting factor was weak rods. Old rods limited engine to 700hp. 2014 Boss had forged rods & pistons. Most people consider 900hp it's limit. Mostly due to high compression ratio (assuming pump gasoline). 2015 GT has Boss forged rods (same part number) but 2014 GT style cast pistons. Will the cast pistons be limiting factor or high compression? It's unknown to the public. 700-900hp on pump gas is a very safe bet. 1,000hp given cast pistons & high compression doesn't sound reasonable.
ramiro gonzalez wrote on September 10, 2014 - 12:56am Permalink
Great Write Up! Can't Wait to get my hands on a 15 Gt! I've been wanting one since they resurrected the 5.0!
Ka-boon wrote on September 19, 2014 - 9:35pm Permalink
Ya forgot pistons. OEMs generally avoid forged pistons, as they come with a slight increase in NVH, plus a very small increase in emissions, one you can barely measure on a new car but which is significant in regulatory terms. Emissions regs are very tough and last for 100K mi. Finally, of course, they cons significantly more. You also need a drop in compression when you get up to extreme boost numbers, unless you're burning alcohol or $8/gallon race gas ... and leaded race gas would quickly destroy the catalysts. Yes the forged crank and rods are a big deal and a stronger block is an even bigger one. But without forged pistons you must be cautious with boost, because cast pistons break whereas forgings bend.