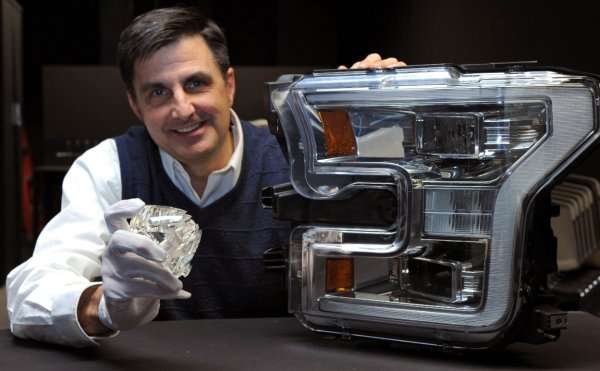 When the 2015 Ford F150 hits the street later this year, it will be the first half ton truck sold in America to feature high tech LED headlights – bringing a sharp look, better lighting while driving and better durability than the traditional filament-based headlight bulbs to the bestselling vehicle in America.
Advertisement

LED headlight technology has been growing in popularity so it doesn’t come as a huge surprise that the 2015 Ford F150 will feature this high tech lighting system. The upwards shift in the importance of modern technology in pickup trucks has pushed the automakers to constantly be on the cutting edge with their hardest working vehicles and Ford will be the first half ton pickup to feature full LED headlights. Both Chrysler and General Motors have offered headlights with LED marker lights and/or LED daytime running lights, but the 2015 F150 is the first to rely on LEDs for the main headlight bulbs.

Once the next generation F150 goes on sale later this year, the Ford F Series will feature lighting technology that has previously been reserved for the likes of Audi, BMW and other high end European luxury brands.

Aside from being flashy and high tech, there are far more important advantages to the 2015 Ford F150 featuring LED headlights. First and foremost, LED headlights are longer lasting than a traditional Halogen bulb which relies on filament technology and Ford claims that these new headlights will last roughly five times longer than a traditional bulb over the same usage cycle. With a conventional Halogen bulb, the life can be greatly reduced by extreme temperatures and excessive vibration while LEDs are not affected by heat, cold or serious vibrations.

The ultimate goal was for the headlights to last as long as the vehicle. While this seems a bit farfetched, it would be nice to not have to worry about replacing the headlights in your F150 more than once every 10 years or so.

Finally, the 2015 Ford F150 will feature an LED light tube that travels around the outer edge of the headlight lens for an ultra upscale, high tech look. Lots of automakers have begin adding LED trim lighting – sometimes referred to as halo headlights – but the 2015 F150 will be the first truck on the market with such an elaborate full LED headlight setup.

“Remember the craze in the 1980s with truck light bars?” Teodecki said. “It looks so cool. I’m telling you, this LED light tube is going to be the next big thing. Our new F-150 owners will be longing for dusk every day, just to show off their trucks in dramatic lighting.”