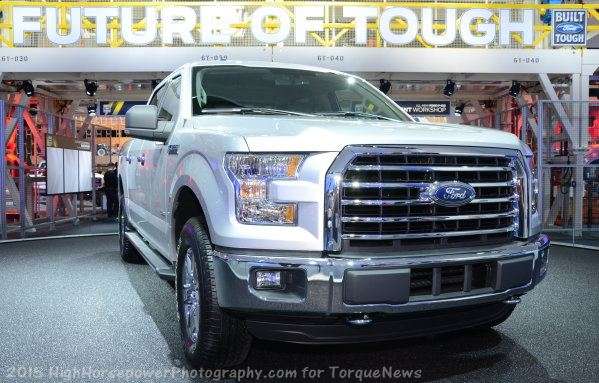 Sales numbers for the F150 are still down relative to the same months last year, but as more 2015 Ford F150 pickups reach dealerships around the country every day, those numbers are steadily improving and the Motor Company has announced that the EcoBoost V6 engines and the premium trimlines are leading the charge for the 2015 model year.
Advertisement

When an automaker looks at sales success, they typically look at the month in question compared to the same month one year earlier and with regard to that method, the Ford F Series has had a rough first four months of the 2015 calendar year. Although Ford F Series sales for 2015 are up by 1.4% over the first three months of 2014, monthly sales numbers have been down compared to the incredibly strong figures from last year.

Why the Sales Slump?
The reason that many industry analysts believe is causing this slight down-turn in Ford truck sales is the early demand for the 2015 F150 exceeding the available supply of new trucks. The F150 is traditionally built in two plants to meet the demand – the Kansas City plant in the Detroit plant. The Detroit plant was prepared to build the aluminum bodied F150 first so when 2015 F150 production officially began, only Detroit was producing these new trucks. However, the Kansas City plant began building new F150s in the past month so the Motor Company is becoming more capable of meeting the demand. That should lead to more trucks with different options on dealer lots around the country and that will eventually lead to improve sales.

Unfortunately, that didn’t help much in April 2015, as Ford F Series sales were once again down – this time by just under 1%. It is a very minimal decline, but it is a decline nonetheless and that is something that automakers don’t like to see in their books, so Ford will certainly make the necessary moves to continue to improve truck sales.

The Bright Spots for FoMoCo
The good news for Ford Motor Company is that throughout the first few months of 2015 F150 sales, their EcoBoost V6 engines and their premium trimlines have proven to be by far the most popular.

When Ford first rolled out their 3.5L EcoBoost V6 for the F150 pickup a number of years ago, there were more than a few critics who insisted that a premium V6 engine just wouldn’t go over well in the American market. Those critics were quickly hushed when the 3.5L EcoBoost V6 become the bestselling F150 engine by a comfortable margin and with the introduction of the new, more efficient 2.7L EcoBoost V6, Ford is seeing even more success from this technology.

While there are on specified sales numbers for the 2015 F150, Ford has stated that a whopping 63% of all new F150s sold are powered by either the 2.7L or 3.5L EcoBoost V6. Even with the 5.0L V8 picking up some addition power and capability levels for the 2015 model year, the EcoBoost engines are still the most popular engine option. This just further shows that Ford made the right move gambling on a premium V6 engine design, as these are record sales split figures for the turbocharged V6 engines.

Also, of the 2015 F150 pickups delivered thus far, 60% of them have been premium trimlines like the Lariat, the King Ranch and the Platinum. This is good for Ford, as these premium trucks have the highest prices and the highest profit margins, while also making it very clear that half ton truck buyers are willing to pay big money for heavily loaded trucks.

It should be noted that while Ford F Series sales have been a bit sluggish in some months this year, the F Series is still comfortably the bestselling vehicle in America.

Chris Schuele wrote on May 6, 2015 - 8:46pm Permalink
This report and these specific sales numbers are pretty slanted. I've been trying to find a 5.0 2015 with the options I'm wanting and the only trims you could really find them in were the luxury trim crew cabs. An overwhelming number of XL and XLT supercabs seems to be 2.7 ecoboost with the 3.5 N/A coming in second. It's easy to sell mainly v6 ecoboost when that's a majority of what you're offering to the public.Hopefully Ford will start building a wider variety of trucks instead of pushing the upper trims and 2.7's at launch.