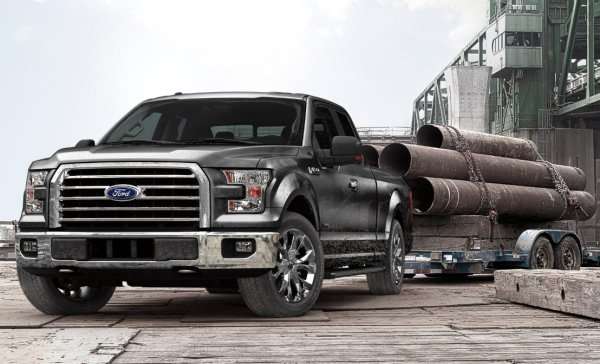 Ford Motor Company still hasn’t rolled out all of the information on the 2015 Ford F150, but they announced the towing and payload numbers for the next generation pickup and – as I expected – the new lightweight F150 is the most capable F150 ever with towing and payload figures that make it by far the best in the half ton truck class.
Advertisement

The 2015 Ford F150 has groundbreaking levels of aluminum in the body and because of that, the next generation F150 will be the significantly lighter than the outgoing models. This will help to make the 2015 F150 one of the most efficient half ton trucks sold in America, but a few months back I speculated that this lightweight design would have a big impact on the towing and payload capabilities. After all, cutting weight from the body means that the chassis, suspension, brakes and drivetrain are able to tow or haul that much more weight.

It turns out that I was right, the 2015 Ford F150 is vastly more capable; with numbers that make it much better than the outgoing 2015 F150 and more importantly – much better than any other new half ton truck sold in America. Also, the maximum payload numbers for the 2015 F150 put it way above the competition from General Motors and Chrysler’s Ram brand. Most importantly, these numbers from Ford are certified under the new SAE towing standards so the other automakers can no longer point out the fact that their towing numbers are SAE approved while Ford’s are not. Everyone is on a level playing field – and the 2015 F150 beats the competitors very soundly.

The 2015 F150 Dominates the Hauling World
It is a big deal for the 2015 Ford F150 to offer significantly more towing capabilities than the strongest Ram or General Motors under the new SAE requirements, but just as important is the fact that the new F150 beats the Ram and Chevy in hauling numbers…by a massive margin.

A payload capacity of 3,300lbs means that the 2015 Ford F150 could haul around a car in the bed if it would fit and for those question that – I own a classic American muscle car that weighs a touch under 3,000lbs.

Will anyone really haul 3,300lbs in the bed of their 2015 Ford F150? Probably, but it won’t be common and the important part is that if you NEED to haul 3,000lbs worth of anything – the 2015 F150 is the only half-ton truck on the market that will be able to safely handle that load.