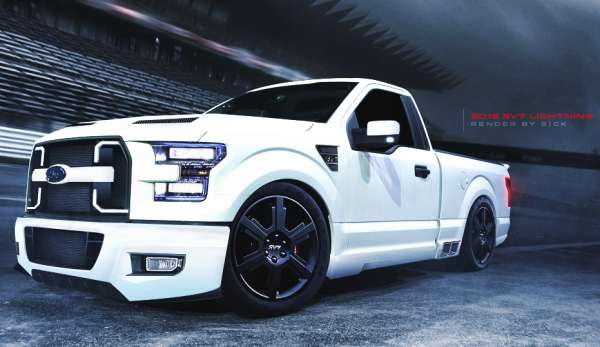 One of my regular readers emailed me the picture above of a 2015 Ford F150 Lightning rendering, asking me if it something like this is coming and while I don’t know if we are likely to see a new Lightning for the new model year – this image definitely shows that the 2015 F150 could be converted into one great looking sport truck.
Advertisement

Since Ford Motor Company introduced the 2015 F150 in January at the North American International Auto Show in Detroit, they immediately began focusing on the efficiency and the many working capabilities of the next generation half ton F Series pickup. What the company really hasn’t mentioned at all are the performance levels of the 2015 F150 from a go-fast perspective and that makes sense with the marketing focus of the new model launch, but there are plenty of prospective buyers out there who want a high performance F150.

There are plenty of people out there who want a 2015 Ford F150 that looks very much like the rendering above – whether or not the SVT Lightning name is reincarnated.

2015 Ford F150 Lightning By “Sick”
I should start by saying that I don’t know where this 2015 Ford F150 Lightning rendering originated and the reader who sent it to me said that he received it in an email as well. As you can see, it says “Render By Sick” so if anyone knows who “Sick” is, post in the comments so that I can provide proper credit for this beautiful piece of automotive artwork.

What you see here is a 2015 Ford F150 with a regular cab and short bed, a configuration of the next generation F150 that I’ve not yet seen in person. The artist then added a grille design that is borrowed from the 2013 Ford Atlas Concept truck along with a very large custom front fascia with a huge opening – like allowing room for air to enter a big intercooler. This F150 Lightning rendering also wears a dual scoop hood while the factory production LED trimmed headlights finish off the high tech, aggressive look of this wicked looking sport truck.

Along the sides, the Sick 2015 Ford F150 Lightning rendering wears a set of fender vents from the SVT Raptor, a set of big, black SVT wheels and a deep reaching side skirt design with the exhaust poking out just before the rear tires – a look which we have seen on the Saleen S331 version of the older F150. It appears as though there could be a small wing on the top of the tailgate and based on the stance, this truck would feature some sort of sport suspension that puts it very close to the ground for the best handling and aerodynamic properties possible.

What Would Be Under the Hood?
Should a 2015 Ford F150 Lightning like the image above surface – even a year or three down the road – it would be interesting to see what engine the Motor Company would use. The previous SVT Lightning had a supercharged V8, but with Ford putting so much emphasis on EcoBoost technology, I wouldn’t be surprised to see a high performance F150 sport truck packing a super-tuned version of the 3.5L EcoBoost V6. The other option would be to use a 5.0L V8 more similar to the one used in the 2015 Ford Mustang GT, with 435 horsepower and 400lb-ft of torque. Of course, Ford could really go all-in and power the next generation SVT Lightning with the rumored 5.2L V8 that will power the 2015/2016 Mustang GT350…with an output that will likely tickle the 500hp mark.

Sadly, I have to remind everyone that this is not an actual production vehicle or even a concept image from Ford – this is simply artwork showing one man’s vision of the 2015 F150 Lightning. Really, while this image is nothing more than the work of a skilled artist, there is no question that this is one great looking 2015 Ford F150 Lightning rendering. Best of all, since what makes the truck shown above so unique is really just a new grille, a new front bumper, a new hood, new side skirts, wheels, springs and exhaust – there is nothing about this truck that would prevent Ford from building something similar.

Corrie ferrin wrote on December 31, 2014 - 7:54pm Permalink
The guy that made this rendering I belive belongs to a ford lightning fourm lightning rodder
Chris wrote on January 17, 2015 - 12:29am Permalink
I would love to see a new lightning come out especially when thay stop making them on 2002 and it would put a stupid face for Chevy and gmc trucks