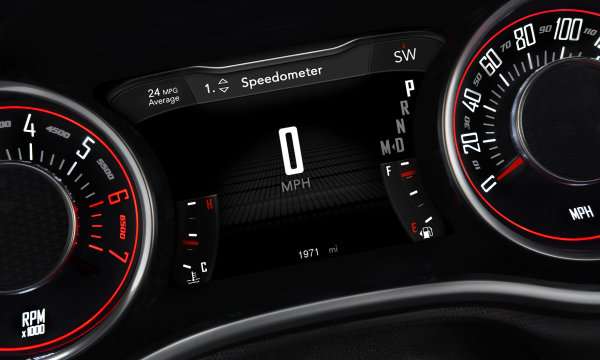 The National Highway Traffic Safety Administration has announced a recall of the 2015 Dodge Challenger due to a concern that the high tech gauge clusters could fail to work suddenly and without notice –leaving the driver without the information provided by the various gauges.
Advertisement

Every car in the 2015 Dodge Challenger lineup is fitted with a new gauge cluster featuring two big, classic looking analog gauges flanking a configurable driver information display in the middle with all sorts of information. This setup allows the driver to always see the engine RPM on the large tachometer on the left along with the speedometer on the large speedometer on the right, while the central screen shows things like a digital speedometer, fuel economy, trip mileage information, navigation information, what you are listening to on the radio and much more. Unfortunately, the Chrysler Group has found some problems with this new cluster that has led the automaker to recall a fairly large collection of modern Mopar muscle cars.

The 2015 Dodge Challenger Gauge Cluster Recall
According to the bulletin on the National Highway Traffic Safety Administration website, a group of 2015 Dodge Challenger models may have an electrical issue that could cause the gauge cluster to stop working randomly and without any warning. The NHTSA claims that having the gauge cluster stop working could lead to an accident, but I fail to see how not being able to see my vehicle speed or engine RPM would cause me to crash unless the lack of a speedometer led me to accelerate uncontrollably to dangerously high speeds.

The bigger reason for the 2015 Dodge Challenger recall is that the problematic gauge cluster puts the muscle car in violation of Federal Motor Vehicle Safety Standard #101 for “Controls and Displays”.

The details of exactly what happens with the 2015 Dodge Challenger gauge cluster are vague so it is unclear whether the analog gauges, the digital screen in the middle or all of the gauges fail to function when this problem hits – but any malfunction of the gauge cluster puts the new Challenger in violation of the FMVSS regulations.

In total, 11,674 examples of the 2015 Challenger are included in this recall, with all but six of those being found in the US while those other six are in US territories outside of the 50 states. All of the affected vehicles were built between June 30, 2014 and October 8, 2014 so basically, if you got one of the first 2015 Challengers to reach showrooms – your car is probably being recalled.

The Fix is Quick and Easy
The good news is that the fix for the problematic 2015 Dodge Challenger gauge cluster recall is a very simple one. A technician will hook the muscle car up to a diagnostic machine and by adding a new software program, the problem will be rectified. Of course, this work will be performed free of charge to the vehicle owner.

The automaker began contacting owners on December 15th and they continue to do so, but if you own a 2015 Dodge Challenger and you want more information on this gauge cluster recall, you can contact Chrysler customer service at 1-800-853-1403.