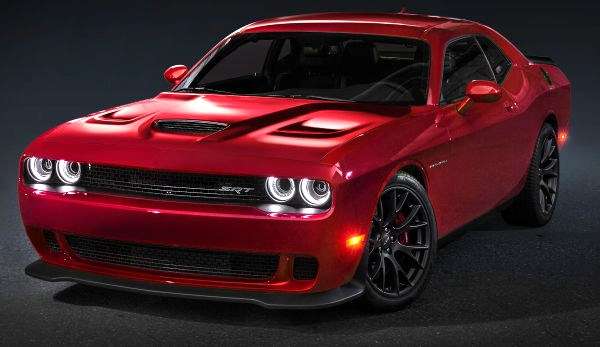 Auctioning off the first unit of a special car has become commonplace with the Detroit automakers should it comes as no surprise that 2015 Dodge Challenger SRT Hellcat #0001 will roll across the Barrett Jackson Las Vegas auction later this year – with a chance of the most powerful American production car ever having a chance to be the most expensive ever.
Advertisement

There haven’t been many American cars in the past decade that have drawn as much attention as the 2015 Dodge Challenger SRT Hellcat and when you consider the fact that the Hellcat Hemi makes this Challenger the most powerful American production road car of all time – it’s not hard to understand why this brawny Mopar muscle car has gotten so much attention. With 707 horsepower, the Challenger SRT Hellcat is more powerful than any American car ever mass produced for street use while an NHRA certified stock quarter mile time of 11.2 makes it the quickest factory issue street car ever.

The 2015 Dodge Challenger SRT Hellcat is a very big deal in the performance world and when it hits showrooms later this year, there is no question that it will be in high enough demand to warrant a serious markup to the $60k starting price. However, we can expect to see the very first Hellcat Challenger go for far, far more than the base price when it rolls across the Barrett Jackson Las Vegas auction in September – and all of that money will be donated to the Vegas charity the Opportunity House.

First Cars Bring Big Money for Charity
Over the past few years, it has become very common for the first unit of a vehicle to be auctioned off for charity, and 2015 Dodge Challenger SRT Hellcat VIN #0001 will join an impressive list of “firsts” to hit the block this year. Other notables included the first 2014 Chevrolet Corvette Stingray, the first 2015 Chevrolet Corvette Z06, the first 2015 Chevrolet Camaro Z/28 and the first 2015 Ford Mustang GT. The Hellcat Challenger packs more power and may be almost as rare as the likes of the Z/28 and the Z06 (if not rarer), which when combined with the fact that this is the absolute most powerful American production car of all time could lead to some massive money raised for the Opportunity House.

“The 2015 Challenger Hellcat is already guaranteed to be one of the hottest cars that will roll through the Barrett-Jackson auction lanes in decades to come,” said Tim Kuniskis, President and CEO, Dodge and SRT Brands, Chrysler Group LLC. “The VIN 0001 being auctioned this year is the ultimate one-of-one collectible 2015 Dodge Challenger, as Dodge is ensuring there will never be another one like it.”

However, if 2015 Dodge Challenger SRT Hellcat #0001 wants to be the most valuable charity car sold in the past few years, it will need to bring some very, very serious money. The first 2015 Ford Mustang sold for $300,000 while the first 2015 Camaro Z/28 raised $500,000. The first 2015 Corvette Z06 raised a cool million and the first 2014 Corvette Stingray raised $1.1 million. It should probably be noted that Mr. Rick Hendrick wrote those million dollar checks for the two Corvettes, along with paying another million for the very first 2014 Corvette Stingray Convertible. We should also point out that Chrysler and Fiat CEO Sergio Marchionne recently auctioned off his own Dodge Challenger SRT8, which sold for an impressive $175,000…I would expect to see the Challenger Hellcat #1 raise far, far more than that.

Not Your Normal 707hp Challenger
The very first 2015 Dodge Challenger SRT Hellcat will be a very special car simply because it is the first unit of the most powerful American performance car ever, but the Chrysler Group will put extra effort into Hellcat #0001 to make it even more unique and more collectable. First, the first Hellcat will feature unique badging and this will be the only 2015 Challenger painted in the deep metallic Stryker Red paint that is only offered on the SRT Viper GTS. Next, specific VIN documentation will insure the future collectability of this 707hp beast and a unique owner’s package including an “electronic vehicle build book” (that I am guessing is a tablet) loaded with a video documentary, professional still images of the car, an embroidered Hellcat iPad case, a signed SRT Hellcat lithograph and a cool birth certificate for Hellcat #0001. Also, this particular Challenger will be fitted with black Laguna leather and the 8-speed TorqueFlite automatic transmission.

“With 707 horsepower, the 2015 Dodge Hellcat is more than just the most powerful muscle car built by an American manufacturer,” said Craig Jackson, Chairman and CEO of Barrett Jackson Auto Auctions. “It’s also going to be the means to help countless people with severe intellectual and related disabilities reach their potential. We’re honored that Dodge chose our 2014 Las Vegas auction to sell Hellcat VIN0001 to support Opportunity Village. Not only will the wonderful people at this organization benefit from the sale of this muscle car, but the winning bidder will own a truly amazing piece of American automotive history.”

The benefactor of this first 2015 Dodge Challenger SRT Hellcat auction is Opportnity Village in Las Vegas, which supports programs that help people with intellectual disabilities live better lives. You can learn more about Opportunity Village by clicking here!

The auction for 2015 Challenger SRT Hellcat VIN #0001 is September 27th in Las Vegas so if you have a half million dollars or so laying around and you would like to own the first unit of the most powerful American performance car ever, start planning your trip to Sin City today!