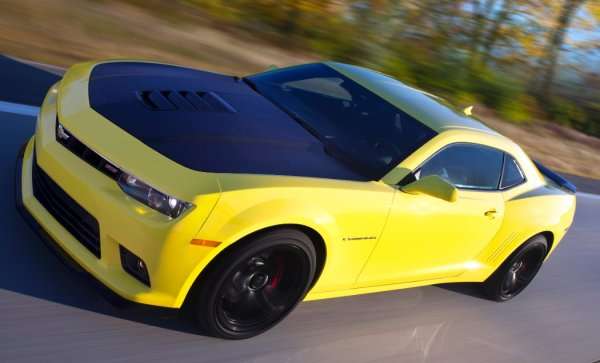 The 2015 Ford Mustang has been billed by many fans as the pony car that would conquer the Chevrolet Camaro, but with the folks at Motor Trend having taken the two cars to Willow Springs Raceway for a head to head comparison – it seems that the Mustang is still trailing the aging Camaro.
Advertisement

When you put the 2014 Camaro and the 2014 Mustang side by side, it is easy to see why the Chevy will win most races. In the 2014 model year, the Camaro had more horsepower, more torque, a more advanced suspension setup and even though it weighed more, the Camaro held the advantage in most performance categories. However, the introduction of the 2015 Mustang with a new independent rear suspension setup and a little more power had many Ford fans believing that the next generation Mustang would knock off the Camaro – at least on a road course.

Well, the folks at Motor Trend took the 2015 Chevrolet Camaro SS 1LE and the 2015 Ford Mustang GT with the Performance Pack to Willow Springs Raceway in California to see which new model year muscle car could lay down the best times.

I will warn Mustang fans – the news isn’t good.

The Battle of the 2015 Muscle Cars
Motor Trend loves to put cars head to head on a road course and even though very few Camaro and Mustang owners (relative to the total number sold) will ever take their cars to a road course, this is all about bragging rights. The 2015 Ford Mustang GT has a new independent rear suspension system that will almost certainly make it the best handling Mustang generation ever. The benchmark for handling was the previous Mustang Boss 302 and with the new rear suspension setup, the Ford engineers had a more advanced design with which to build their strong handling muscle car. Some Mustang owners hated the idea of the new rear suspension simply because it can hinder drag racing abilities, but aside from that, this new suspension setup was to guarantee a better riding and better handling Mustang. More importantly, that new independent rear suspension setup would help give the 2015 Mustang a handling advantage over the Chevrolet Camaro.

To see if this was the case, Motor Trend took a 2015 Chevrolet Camaro SS 1LE and a 2015 Ford Mustang GT with the GT Performance Pack to Willow Springs Raceway, putting both cars through the paces to see which could lay down the better time. For those unfamiliar with the Camaro SS 1LE, it was Chevrolet’s answer to the previous Boss 302 Mustang and it comes with a host of upgrades that make it a substantially better handling car than the “average” Camaro SS. The GT Performance Pack for the 2015 Mustang adds many of the same upgraded items, but the 1LE package is a touch more extreme than the GT Performance Pack and that added level of performance allows the Chevy to beat the Ford around Willow Springs Raceway by a second and a half.

To be exact, the Camaro SS 1LE turned a best lap time of 1:22.81 while the new Mustang GT was “only” able to run a 1:24.32…1.51 seconds slower than the Camaro. I have to point out that the 1LE package is definitely more expansive than the GT Performance Pack, so I am not all that surprised that the Camaro was able to beat the Mustang at Willow Springs. It would be a far fairer comparison if the Mustang actually had all of the same upgrades as the Camaro, but the comparison of the two factory-offered packages makes perfect sense and in that battle – the Camaro won again.

You can watch the entire fight unfold via the Motor Trend video below.