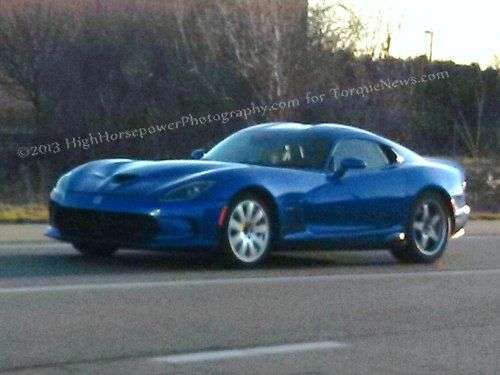 Yesterday afternoon, we caught up with what appeared to be a 2014 SRT Viper GTS test mule in GTS Blue sporting some unusual round exhaust protruding through the side sills and a set of non-matching rear wheels similar to those used on the 2010 Dodge Viper SRT10 ACR - leading me to wonder if this test car might wear some of the features of the new American Club Racer Viper.
Advertisement

I see a great many test mules driving around the Metro Detroit area and it isnt all that unusual to even see supercars out with manufacturer’s tags but this is the first SRT Viper mule that I have seen with the odd wheels and exhaust tips. Since the 2013 model year Vipers are already shipping to dealerships around the country, the company should now be testing 2014 model year vehicles which is why I believe that this would be a 2014 Viper mule.

Also, you have likely noticed in looking at these images that the 2014 SRT Viper GTS is wearing non-matching front and rear wheels – both of which are completely unlike anything current offered on the 2013 SRT Viper. The front wheels have a nine spoke flat faced and slightly sunken in design that is unlike anything that we have seen on the Viper since its introduction back in the early 90s. The back wheels, on the other hand, may look very familiar as these look nearly identical to the wheels used on the 2010 Dodge Viper SRT10 ACR that set records around the world. SRT boss Ralph Gilles has made it pretty clear that there is a new SRT Viper ACR coming in the near future (likely as a 2014 model year vehicle) and while this car doesn’t wear the more race-friendly body dressings that we fully expect to see on the next generation Viper American Club Racer – perhaps one of these wheel designs and the circular exhaust tips could be facets of the 2014 Viper ACR. The 2010 Dodge Viper ACR has secured its place in the automotive record books with the simple 5-spoke rim design; perhaps the company will pay homage to the record setting 2010 ACR by the 2014 SRT Viper ACR wearing similar wheels. Also, the round exhaust tips in place of the molded tips are unquestionably more familiar in the world of racing so it would make sense that a Viper designed to set track records around the world would have exhaust tips that are more track-ready-looking.

Of course, there is also the possibility that the 2014 SRT Viper GTS mule shown here is clad with wheels and exhaust tips that are being used only for testing purposes. The wheels could be a feature of the future SRT Viper ACR or they could be available on some other future Viper package – possibly something as simple as new option wheels for the GTS. Then again, maybe the SRT engineering team needed some wheels to throw on a test car and they happened to have a set of last generation SRT10 ACR wheels laying around. Also, while test car exhaust tips are generally unfinished, this car might just be wearing unusually nice test tips in place of the standard units that are molded into the body in an effort to save cost on test vehicles. After all, things like exhaust tips don’t need to look pretty on a car that will never be sold to the public but it seems odd that these tips looked so manicured and fit into the side skirts so well compared to other “test tips”.