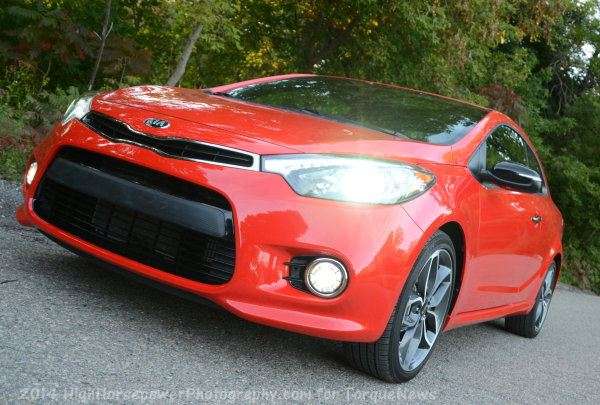 The compact coupe segment in the US market has shrunken a great deal in recent years, but the 2014 Kia Forte SX Koup is proof that those drivers who want a great 2-door compact that is stylish, fun to drive, comfortable and well-appointed can do so without spending a fortune.
Advertisement

There was a point in time where every popular compact car sold in America was available as a sporty 2-door coupe, but over the past few years, many of them have disappeared – leaving the Kia Forte Koup with very few competitors. Ford has killed off the 2-door version of the Focus, GM stopped offering a 2-door compact when the Cobalt was replaced by the Cruze, Dodge hasn’t offered a compact coupe since the first generation of the Dodge Neon and even the sibling to the Forte Koup – the Hyundai Elantra Coupe – has been discontinued. That leaves the Honda Civic and the Scion tC as the only real 2-door compact coupes sold in America now and compared to those two cars, the new Forte SX Koup shines.

The Exterior
The previous Kia Forte Koup had a nice, sporty look, but the 2014 Forte Koup wears a new exterior design that carries the same aggressive look that we see across much of the rest of the current Kia lineup. This includes big, angry looking LED-trimmed HID headlights that flank a thin central grille and across the bottom, sharp looking fog lights are mounted in vented looking housings on either side of the huge lower grille that allows plenty of airflow for the turbocharging intercooler system. I like the face of the new Kia lineup and I think that it fits this sporty compact coupe really nicely. Down the sides, the 2014 Kia Forte SX Koup has flared wheel openings, body panels with a high, curved should line and line that give the car a very sporty looking stance from the side. The new Koup also has a really sexy silhouette when viewing from the side while the thin spoke wheels with a machined face and dark pockets drive home the sport compact look.

Out back, the Kia Forte Koup has a high design to create a very aggressive natural rake, with a low profile spoiler design molded into the trunk lid and a great looking black lower fascia center with an integrated diffuser and dual exhaust tips. When you add in the big, bright LED taillights, the 2014 Forte Koup has a rear end that screams sporty coupe. The diffuser and dual exhaust really are a couple of great features for such an affordable compact coupe. When reviewing the exterior design of a car, I think about what I might change to fix problems that I see, but with the successful design of the 2014 Forte SX Koup, I wouldn’t change a thing. This isn’t really a sporty model, but you wouldn’t guess that from the lines from front to rear. This is a car that you will look back at when you walk away from it in a parking lot, because it looks great.

The Interior
There was a point in time where buying a compact 2-door Kia meant that you would be driving a barebones, low tech and uncomfortable car that made you compromise in every imaginable way to get a cheap, fuel friendly car. The Kia lineup has come a very long way in terms of interior amenities and the 2014 Forte SX Koup is a very clear example of the uphill direction as soon as you open the door. The front seats are wrapped in black leather with white contrasting stitching and moderate thigh and side bolsters really give these seats a proper sporty look. These seats don’t hug you quite as much as some sporty seats in other compacts, but what they lack in support they make up in overall comfort. Some seats with big, deep bolsters can be uncomfortable for some drivers in any driving circumstances while others are fine around town, but can get to be uncomfortable on long drives. The Forte Koup seats offer some side to side support during hard cornering while also being very comfortable for drivers of all shapes and sizes. Also, even though this is a small 2-door, the front seats offer plenty of leg, knee, hip, shoulder and head space for the driver and front passenger, although elbow space can become a battle ground across the narrow center armrest. It should be noted that all compacts have a small center armrest so that isn’t a knock against the Forte Koup so much as it is the indeed segment. Finally, in addition to being comfortable and roomy, the front seats are both heated and the driver’s seat is also cooled – both of which are impressive features for such an affordable, Korean compact car.

The back seat is predictably tight and other than small children, I wouldn’t plan on making anyone ride in the back seat of the Kia Forte Koup for very long, but again, that is a problem with the entire segment. Honestly, if you are that concerned about rear seating space, you shouldn’t be considering a compact coupe. However, if you are looking for space to seat your kids or a medium sized dog, the Forte Koup offers comfortable rear seating for smaller kids or man’s best friend. What is most impressive about the interior of the 2014 Kia Forte SX Koup is the level of technology that was previously reserved for far more expensive models. The centerpiece of this plush interior is the touchscreen infotainment system that includes a big, bright touchscreen interface that controls the navigation system, the media system, the radio and the hands free phone system. The Kia infotainment system is very easy to use through the touchscreen, but those who prefer hard buttons will be able to access and control almost everything from either the small panel of buttons and knobs below the touchscreen, through the many buttons on the steering wheel or through the voice control system. The dual zone HVAC system is accessed via a very simple control panel at the bottom of the center stack while the controls for the heated seats are located down around the shifter. Much of the dash is trimmed in a faux carbon fiber design that looks great against the all-black cabin with black leather on the doors, shifter and steering wheel.

While the 2014 Kia Forte SX Koup doesn’t set the world on fire with never before seen technology, the interior is roomy (up front) and comfortable while packing an impressive list of features that remove any concern of having to compromise when buying an affordable compact coupe. The interior looks great, feels great and really doesn’t leave you asking for anything so for the car shopper who wants the same features as many luxury sedans in a small, sporty coupe – the SX Koup should really answer the call perfectly.

The Drive
While the 2014 Kia Forte Koup is refreshed inside and out, my favorite aspect of the 2014 Koup SX is the new 1.6L turbocharged engine. The previous generation Forte Koup was plenty of fun to drive, but adding the new turbo motor with 201 horsepower and 195lb-ft of torque makes a big difference over the standard 2.0L engine that offered just 173hp and 154lb-ft of torque. This new turbo engine makes the Forte Koup quite a bit more powerful than the Scion tC and while the Honda Civic Si has 4 more horsepower, the Kia has a massive advantage in torque. When combined with the 6-speed manual transmission, the Forte Koup offers plenty of low end acceleration with just a slight hint of turbo lag and with a quick downshift on the highway – you can get similar strong acceleration at higher speeds as well. In short, the new 1.6L turbo motor makes the Kia Forte Koup more fun to drive in every situation so if you are after a compact coupe with the most bang for your buck, the 2014 Forte SX Koup is the car for you. Best of all, with EPA fuel economy ratings (which I found to be very accurate) of 22 around town, 29 on the highway and 25mpg combined, that extra power doesn’t come with a huge compromise in fuel economy. In addition to the new, more powerful turbocharged engine, the 2014 Kia Forte SX Koup comes with a new sport tuned suspension system that is an improvement over the past generation, but it is still a little on the stiff side. The ride quality is expectably stiff and while it might be stiffer than some people expect, I felt that it was acceptably stiff for a sporty compact coupe. The handling on tight cornering offers a touch more body roll than I would expect from a car that is as stiff, but this is still a car that is run to toss into a corner. Also adding to the handling properties of the 2014 Forte Koup is the three mode driver selectable steering system with Comfort, Normal and Sport settings. Sport is the stiffest and has the least amount of power support, which I prefer. Those who liked the power steering to do more work can chose the Comfort mode while Normal is a nice balance of the two. I spent almost all of my drive time in Sport and if you enjoy driving, you likely will as well. The 2014 Kia Forte SX Koup offers impressive power, solid fuel economy and a sportier handling feel than the previous models and while I would like to see a sport tuned suspension setup that offers better road gripping abilities – any handling advantage on the road relative to the competition is negligible at best so people looking for a fun to drive, efficient 2-door compact coupe should find the Forte SX Koup to be the most enticing car in the segment.

The Final Word
While there could be some revisions to the chassis and/or suspension setup to improve both the handling and ride quality, every change made to the 2014 Kia Forte SX Koup makes a big difference. The Korean automakers have often been criticized for not offering the kind of driving dynamics that are expected in the US, but this new Forte Koup is a great step in the right direction. Even though the market for this type of car may be shrinking, those folks who do want a small, sporty 2-door compact coupe that gets solid fuel economy and packs a ton of interior goodies without breaking the bank should find this car to be a home run. I liked the previous generation of the Forte Koup and with the changes for the new generation, I like it even more. The segment has gotten very small so there isn’t much competition and the previous generation Forte Koup was a very solid car, but Kia didn’t sit by idle – instead adding a new motor, a new look and a plush new interior to make a very good car into a great car.

JeffS wrote on November 22, 2014 - 6:44pm Permalink
Is it safe? The last Forte was not, (relative to others, such as the Civic). To some won't make a hill of beans of difference one way or another, to others, a primary consideration.