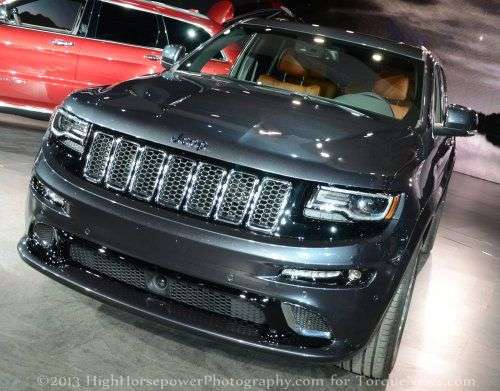 The big news from the Chrysler Group at today’s start of the 2013 North American International Auto Show was the formal introduction of the 2014 Jeep Grand Cherokee SRT8 and while this high performance SUV is best known for going fast – some new features will help the 2014 SRT Jeep tow more while offering better fuel economy and performance.
Advertisement

The most obvious changes to the 2014 Jeep Grand Cherokee SRT8 appear on the outside, where the high performance SUV has received a mild yet powerful facelift. This includes a set of very Chrysler 300-like HID projection headlight assemblies that are more streamlined than the 2013 Grand Cherokee SRT8 while a heavy dose of LEDs give the front end a more high tech, upscale look. These new headlights bracket the familiar seven slot Jeep grille which has also been slightly adjusted for the new model year while both the grille and the headlights find themselves floating in a contrasting black panel. This black surrounding area matches with the black trim found around the LED fog lights mounted mid-fascia as well as the lower fascia opening which continues to offer two smaller vents on the outside and one large opening in the middle – all of which are filled with black mesh. Along the side, the only major change is a new 5-spoke aluminum wheel design that replaces the split spoke design on the 2013 SRT8 Jeeps.

Out back, things are refreshed a touch as well with the addition of a new spoiler mounted high on the hatch while new LED taillights that sport a similar thin design to the headlights helps give the rear of the new Jeep Grand Cherokee SRT8 a sportier look while the aggressive stance of the SRT package does the rest. While the headlights and taillights are the only really significant changes on the new SRT Jeep, they work with the more minor details to give this high performance hauler a more sinister countenance.

Speaking of hauling, while the 2014 Jeep Grand Cherokee SRT8 is powered by the same 6.4L Hemi as the current models with 470 horsepower and 465lb-ft of torque but with the help of a new 8-speed automatic transmission, the 2014 Grand Cherokee SRT8 can tow up to 7,200 pounds. This is an improvement of 44% over the 5,000 pounds that the current SRT Jeep can tow but it isn’t just towing performance that received a bump for 2014. Thanks to the flexibility in gearing with the new 8-speed transmission, the 2014 Grand Cherokee SRT8 will offer improved acceleration times over the 2013 models equipped with the 5-speed transmission. The addition of three more transmission gears allows the numerically lower gears to have a more aggressive ratio for improved acceleration (both for high performance purposes and while towing) while the 6th, 7th and 8th gears allow the power SRT Hemi engine to use less fuel during more gentle driving situations. Also, having 8 gears instead of 5 allows for smaller jumps between each gear which leads to reduced shift times while driving hard and smoother shifts while driving more gently. The new SRT8 Jeep also features an Eco mode that furthers the fuel saving efforts in cooperation with the Chrysler Group’s Multiple Displacement System (MDS). The transmission is controlled by a new T shaped shifter that offers both a normal Drive and a Sport mode which, unlike the Selec-Track modes that alter the suspension, stability control and torque split settings, only adjusts how hard the high performance Jeep shifts.

Finally, to add a little some extra special for the 2014 Jeep Grand Cherokee SRT8, the Street and Racing Technology engineers added a new launch control feature that collaborates the efforts of the engine, the transmission, the stability control, the system and the advanced four wheel drive system to provide positive, hard launches that are said to mimic that of a professional driver. When the Track mode is chosen in Selec-Track, the intelligent AWD system sends 70 percent of the power to the rear wheels for a new-rear drive experience while still offering the traction support of all wheel drive.

Of course, like all of the SRT products, the 2014 Jeep Grand Cherokee SRT8 features a high end sport interior that includes heated leather seats with embroidered SRT logos, a sport steering wheel with transmission shifter paddles, gobs of carbon fiber trim, a 7 inch customizable gauge cluster, an 8.4 inch infotainment touch screen that includes all of the vehicles internal controls plus the new SRT performance gauges and power everything. Ultimately, the Jeep Grand Cherokee SRT8 carries a price tag north of $60k and the Chrysler Group has made sure to put together a luxurious interior setting that will compete in quality and comforts with other high end SUVs.

The 2014 Jeep Grand Cherokee SRT8 packs an aggressive new look, enhanced performance, increased towing capacities and better fuel economy – improving on what is already one of the most exciting sport utility vehicles on the market today.

Check out our gallery on the right of the 2014 Jeep Grand Cherokee SRT8 by clicking any of the thumbnails!