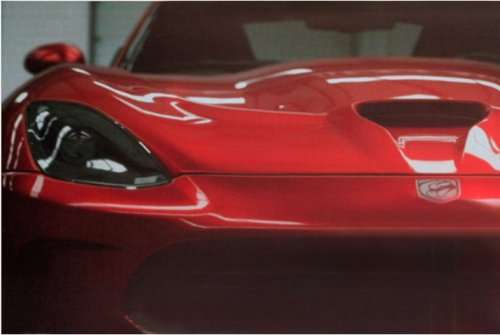 The folks at the Inside Line introduced these pictures earlier today, showing what looks like the 2013 SRT Viper in a computer generated world with graphics that strongly resemble something that would be seen on the Xbox 360’s Forza Motorsport 4 – giving us our best look yet at the new American supercar hours before the car is formally introduced in New York.
Advertisement

The images of the 2013 SRT Viper appear as though they could have been created by the driving simulator Forza Motorsport 4 and while these pictures might not be from Forza 4, it is clear that these images are definitely not actual photographs of the new Viper. Like others, we speculate that these still shots of the 2013 Viper in action are part of a presentation that will either accompany the debut of the new supercar – or perhaps the video will hit the internet to show the car in action in a virtual world while the automotive world drools over the new Viper in the flesh. For those unfamiliar with the Xbox 360 game Forza Motorsport 4, it is the leading title in the video game racing world and in offering a sort of look of its own in the various non-racing views; these images sure look like something that would be seen in Forza 4.

UPDATE: Along with the New York Auto Show debut of the 2013 SRT Viper, it was announced that these images were captured from gameplay of Forza Motorsport 4. You can view the whole FM4 Viper video below! The new Viper in street and race form will appear in Forza 4 later this summer as part of a downloadable content package. Click here for more on the Viper Pack coming this summer!

By now, the range of spyshots, Hot Wheels images and teasers pretty much have given us a good idea of exactly what the 2013 SRT Viper will look like but these computer generated images offer a great look of the Viper from a variety of angles. As you can see in the image on the right, the Viper will feature large, darkened headlights with a central air intake facing forward and a set of channels running back through the hood to remove hot air from the engine bay. It appears as though the Viper will retain the crosshair grille from the Dodge brand even though it is no longer technically a Dodge product but for 2013, the crosshairs are darkened in rather than being body colored.

These new shots of the side of the Viper seem to confirm that the 2013 SRT Viper will indeed take massive design cues from the original Dodge Viper GTS Coupe with a deep indentation at the leading edge of the door with a rounded, flowing quarter panel that encompasses the doors and runs all the way back through the molded rear spoiler. Based on these shots, it also looks as though the new Viper will have side exit exhaust – another feature that has withstood the test of the time and remained popular in the Viper lineup.

In addition to offering a great look at the 2013 SRT Viper, these images also give Forza Motorsport 4 gamers hope that the awesome new Viper will quickly be coming to the Forza series – hopefully as some sort of special car package issued to VIP members in cooperation with the debut of the new Viper. That is, of course, somewhat unlikely but in any case, if these shots are from the game Forza Motorsport 4, there is a good chance that gamers will soon be tearing up the virtual racing world in the newest American supercar.