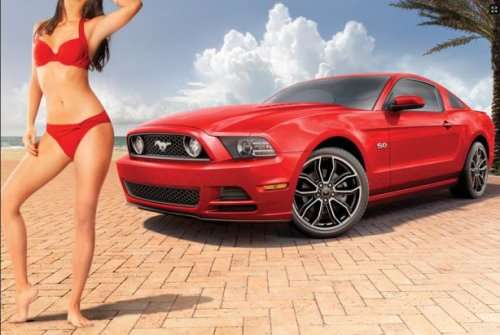 The Men’s lifestyle magazine Maxim is running a contest for the top 100 sexiest women on the planet and among the life of current nominees is Dalena Henriques – the stunning (yet faceless) young lady who helped Ford introduce the 2013 Mustang and Mustang GT via her online modeling site DalenaHenriques.com.
Advertisement

Back in February, images of the 2013 Ford Mustang GT surfaced in the Sports Illustrated Swinsuit Issue featuring the sexy new sports car and an equally sexy model named Miss Dalena Henriques (shown on the right). Around the same time, the website dalenahenriques.com popped up with lots more pictures of the 2013 Mustang GT and GT500 and the sexy model in various outfits. The problem was that Miss Henriques’ face is not visible in any of the images on the website and a search of the internet turned up nothing about the sexy mystery model; leading some to question whether Dalena is new to the modeling scene or if she is just a fictional character created by Ford’s marketing geniuses.

To this day, no one really seems to know who Dalena Henriques is but many speculate that she was a character created for the 2013 Ford Mustang SI Swimsuit Issue ad and the name was created to be unique – so that when horny guys search online for more of the lovely Miss Henriques, they come upon the website featuring this scantily clad beauty along with the new Mustang. “Her” webpage has continued to draw attention from fans of the new Mustang and sexy ladies alike with continued discussion around the internet about who this woman might be but in any case – Dalena has gotten enough attention that she has been nominated for Maxim Magazine’s Hot 100 of 2012.

Maxim is currently accepting nominations for the Hot 100 of 2012 and right now, there are 186 women listed on the voting page of the Maxim website. This means that Dalena Henriques has a better than 50/50 change of making it into the men’s magazine’s list of the sexiest women alive in 2012 – even though she might not technically exist. I mean, in looking at the images of Miss Henriques (available in the gallery on the right), the lovely lady sporting the red bikini and yellow dress sure looks real to me…whether her name is really Dalena Henriques or not. Also, as visitors of the Maxim website peruse the available nominees for the Hot 100 of 2012, each name is linked to a page containing more images and since DalenaHenriques.com is the only website featuring pictures of this mystery model – the 2013 Ford Mustang is continuing to draw attention with the help of the lovely Miss Henriques.

The good news for Dalena Henriques (and Ford Motor Company) is that there are only 186 women on the list right now and from that list – some of them are obviously jokes that stand no chance of winning a contest for being the sexiest woman on the planet. Names like murder celebrity Amanda Knox and cartoon character Roberta Tubbs from the Cleveland Show are unlikely to make the list while cooking superstar Paula Dean is also on the list and while she makes some tasty foods – she isn’t what many would consider to be among the sexiest 100 women in the world.

The bad news for Ford and Dalena Henriques is that the list is also packed full of super hotties like Paulina Gretzky (daughter of hockey great Wayne Gretzky), Dominique Storelli, Megan Fox and Danica Thrall – so it wont be an easy road getting into Maxim’s Hot 100 of 2012.

For a look at the nomination process for the Maxim Hot 100 of 2012 click here and for a better look at the 2013 Ford Mustang images in question, check out DalenaHenriques.com.