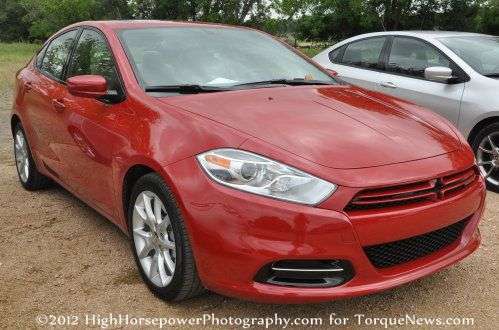 There was a point in time where buying an inexpensive American compact sedan meant that you were buying a cheap car but with the progressive incline in quality for the crowded C segment class – the 2013 Dodge Dart should become the standard to which other compact sedans will be based.
Advertisement

My time spent in the 2013 Dodge Dart SXT took place in and around Austin Texas during a drive event where we had a chance to experience a spread of the new Dart sedans. Since the day that the Dart debuted at the 2012 Detroit Auto Show, we have talked plenty about the aggressive interior and the massive number of options available in the Dart that were reserved for far more expensive cars but today we are all about the drive.

During the event, I was lucky enough to log a couple hundred miles behind the wheel of the Redline Red 2013 Dodge Dart SXT shown in the images on the right, which was powered by the 1.4L MultiAir turbo 4 and the 6-speed manual transmission pairing that made its US debut in the Fiat 500 Abarth. This motor packs 160 horsepower and 184lb-ft of torque, making it one of the most powerful sedans in the class. Only the Ford Focus comes close to the Dart with the same 160hp but the Dart has a massive advantage in torque over the Focus, the Elantra, the Cruze and the Corolla – an advantage that is evident from the first time that you feel the turbo spool up.

The Drive
When I fired up the 2013 Dodge Dart SXT that I would spend the afternoon driving, I was instantly struck by the healthy grumble pouring from the integrated dual exhaust tips at idle and when we pulled out of the parking lot and onto the busy city streets of Austin – that impressive exhaust note continues through the RPM range although it isn’t particularly loud. It is a far cry from the apologetic sounds made by other cars in the class but if I had my druthers…the Dart turbo would be much louder…but that is what the aftermarket is for. Based on the stock exhaust system, I applaud the Dodge engineers for putting a setup on the car that sounds like a performance motor. When cruising around town at lower speed, the Dart is fairly quiet but when you climb into the revs on the open road – the engine once again announces its presence with a deeper tone than I would expect from a turbo 4 at high RPM. Most importantly, when cruising on the highway at 70 miles per hour, there is very little exhaust drone so you can enjoy a conversation or listening to the radio.

When I got into the 2013 Dodge Dart SXT, I was impressive by the amount of interior space for myself and my passenger – with plenty of legroom and headroom. There was tons of elbow room between the driver and passenger but I found that during stints of spirited driving, a shorter driver may find his or her elbow hitting the center armrest when going for 2nd and 4th gears. The clutch is responsive but not to the point of being hard to learn so an experienced stickshift driver should be right at home while a green manual driver will be able to get the hang of the Dart quickly. The throw of the shifter felt a little longer than the comparable Ford Focus sedan but the gears of the Dart were easy to find when upshifting and downshifting through hard cornering and acceleration.

When launching hard from a stop, there is only the slightest bit of turbo lag but as the RPMs quickly get into the 2,000 range, the 1.4L turbo engine allows the 2013 Dart SXT to pull hard – quickly climbing through the gears en route to easily eclipsing the 100mph mark. While this might not be the fastest drag car on the market, the easy winding engine allows you to quickly scream though the gears with some surprising chirps of the tires when headed into 2nd and 3rd gear. While cruising on the highway at 70 miles per hour, the Dart turbo will pull out and pass slower moving traffic in 6th gear but dropping back into 5th gear brings the revs up in a hurry; vastly improving the efforts to blow past the other cars on the road.

The 2013 Dodge Dart SXT turbo is more than just a drag car and when cutting through the back country roads around Austin Texas, we were able to see just how nimble this new compact sedan can be. The days of the compact sedans that handle like shopping carts are long gone and the Dart is a glowing example. Around town, the steering is acute and allows easy maneuvering through tight areas but once we got out into the more open country roads, the Dart handled even the sharpest turns will impressive confidence. The Dart feels nice and light through short, tight turns and can be thrown around well with little refusal by the new compact sedan but it does so without compromising ride quality when driving under normal circumstances. The Dart offers a nice smooth ride while still allowing the driver to feel the road – providing for a really impressive mix of sport and comfort for such an affordable compact sedan.

While I admittedly drove my 2013 Dodge Dart SXT turbo test car too hard to realize the EPA rated fuel economy measures of 27 around town, 39mpg on the highway and 29 combined – during our trip we were still able to get very close to 29 miles per gallon even though there was quite a bit of spirited, high RPM and high speed driving.

The Interior
Also, even with the fairly standard interior of our 2013 Dart SXT test car, we still were quite comfortable with a standard stereo system, cloth seats and a basic air conditioning system that blew ice cold on the hot Texas day. The SXT didn’t pack the massive 8.4” touch screen infotainment system or the 7” customizable gauge cluster but the basic stereo system gets the job done in a very user friendly manner that less tech-savvy consumers may prefer. The same goes for the basic gauge cluster with big, bright analog designs that show you what you need to know without the fancy information screen that more frugal buyers may not be interested in buying. In short, buying the less loaded up Dart SXT doesn’t make the interior any less impressive as it is still a roomy, quiet cabin with the amenities that you would expect from car of this class.

The Final Word
The 2013 Dodge Dart SXT packing the 1.4L turbocharged engine and manual transmission offers fuel economy capabilities that will beat nearly every other car in the class, save the high efficiency Focus SFE and the Cruze Eco. More importantly (to many) is the fact that the Dart turbo also offers more power, better performance and better handling properties than the other cars in the class – while still not suffering in terms of either economy or the price.

On paper, the 2013 Dodge Dart SXT with the turbo motor offers better power and fuel economy than the competition without pricing itself out of the segment. In the real world, the 2013 Dodge Dart is every bit as impressive as it is made out to be by the Chrysler Group – with an exterior design, interior layout and drive quality that will very easily take on any car in the class and win.

If you are in the market for a compact sedan that offers great fuel economy, impressive power, seemingly endless goodies inside and a price comparable to any other car in the class – the 2013 Dodge Dart is definitely a vehicle that you should drive before removing it from your short list. Spend a half hour driving the 2013 Dodge Dart and you will see just how much the world of affordable compact sedans has changed – and why a Dodge could soon be the leader in this popular class.

Nicolas Zart wrote on May 18, 2012 - 8:08pm Permalink
I was very impressed with the 1.4 turbo. It's civilized in traffic driving and has plenty of oomph when you need it. The one thing I wished it would have done better is the shifting. I'm used to Alfa Romeos and Fiats, and their gear boxes are usually a little quicker. I'm sure the next iteration will remedy this. Another thing I think the car will ace is taking over the compact and even mid-size segment market. It's small enough to be a compact and roomy enough inside to appeal to the mid-size sedan market. Lastly, Reid Bigland said they were now up to 41mpg. I felt with different tires, say low roll resistance ones, they could achieve 42mpg. All in all, it's a great car all in all.