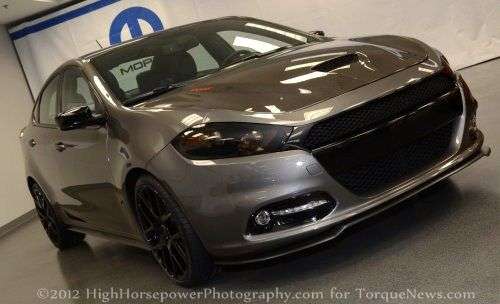 Among the massive indoor Mopar display at this week’s 2012 SEMA Show in Las Vegas was a trio of 2013 Dodge Dart sedans modified with items from the Mopar Accessories catalog that not only give current Dart owners a chance to see how much they can customize their compact sedan with company help but these sporty show cars could also give us a glimpse of what to expect from the Dart SRT.
Advertisement

The three 2013 Dodge Dart sedans at the 2012 SEMA Show were named the Slingshot, the Carbon Fire and the Leadfoot Blue with similarities between the three that give them varying levels of sporting looks. Many of the items on these three SEMA concept cars are either currently available via the Mopar Performance catalog or they are concept parts that could hit the pages of the accessories catalog in the future – provided that they don’t first arrive on the upcoming Dodge Dart SRT.

We got our first look at the Dodge Dart Carbon Fire (shown in the large image on the right) at the Mopar preview event last month and this package adds a unique front fascia sporting the Grand Cherokee SRT8 LED fog light/driving light housings, a subtle chin spoiler, a carbon fiber hood with a front-mounted air intake, a carbon fiber low profile rear spoiler and a rear splitter to give the body of this compact sedan a far sportier look than a stock Dodge Dart. Next, Mopar added smoked headlights and tail lights, 19” wheels wrapped in performance rubber, and silver brake calipers on the outside while Katzkin leather seats provide for a more luxurious interior setting. Finally, Mopar removed the crosshair grille to make room for a “egg crate” style opening that may allow more air flow but as a Mopar fan – I’m not too keen on the removal of the familiar Dodge crosshairs.

The second 2013 Dodge Dart concept to arrive at the 2012 SEMA Show was the white, red and black Dart that the Chrysler Group teased in some sketchy artwork last month that we know now is named the Dart Slingshot. Mopar intends for the Slingshot to be the first look at “what could be” in terms of a Dart B-Spec race car and that begins inside, where Mopar has stripped out the standard Dart interior to make room for a set of lightweight race buckets fitted with race harnesses and a full roll cage. On the outside, the Dart Slingshot wears a similar hood to that seen on the Dart Caron Fire, a chin spoiler, deeper side sills, a carbon fiber trunk lid, a low profile spoiler, a rear splitter and tow hooks up front and out back along with a set of lightweight OZ Racing wheels wrapped in high performance tires.

Finally, the Dodge Dart Leadfoot Blue was the third new compact sedan in the 2012 SEMA Show Mopar display and this dark metallic blue Dart wears a similar chin spoiler, rear diffuser, side sills and rear spoiler to that seen on the Dart Slingshot. The Leadfoot Blue Dart also sports a set of 19” lightweight wheels and the solid (non-crosshair) grille to that seen on the Dart Carbon Fire in addition to the unique Mopar-laden strip that runs from the rear wheels up to the rear glass.

You can check out all three of these 2013 Dodge Dart sedans modified by Mopar by clicking any of the thumbnails on the right.
Now, these three concepts could be nothing more than your typical SEMA Show models with body dressings that are sportier than factory stock models but if you look at the similarities between the three – most notably the rear diffuser, the side sills, the chin spoiler and the carbon fiber hood found on two of the three Darts at SEMA – we could be looking at features of the upcoming high performance Dart SRT.