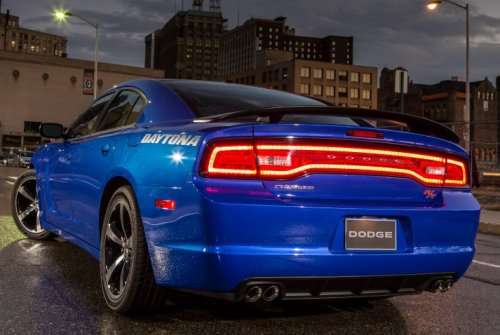 The 2012 Los Angeles Auto Show opened this morning with the key debut in the Dodge booth being the introduction of the 2013 Dodge Charger Daytona – a ‘sights and sounds’ package that adds a unique look to the Hemi-powered Charger R/T.
Advertisement

The 2013 Dodge Charger Daytona follows in the tradition of the Daytona sedans that were offered from 2006 through 2009 with special color options, dark appointments around the outside, unique badging and a fully loaded up interior – with production of the 2013 Charger Daytona limited to just 2,500 units.

The 2013 Dodge Charger Daytona is available in Daytona Blue (shown in the gallery on the right), Bright White, Billet Silver or Pitch Black with every Daytona including Satin Black stripes in the hood scalloping, a Satin Black roof wrap and a Satin Black R/T rear spoiler. This new Charger package also adds a Satin Black crosshair grille, a Satin Black “Daytona” logo on both rear quarter panels and the vintage R/T style grille badging. The exterior upgrades at completed with a set of 20” aluminum rollers featuring a polished face and Gloss Black pockets.

Like all 2013 Dodge Charger sedans, the new Daytona is powered by the 5.7L Hemi V8 covered by a unique Daytona Blue engine cover and packing 370 horsepower and 395lb-ft of torque – all of which is channeled to the rear wheels via a 5-speed automatic transmission that is controlled by steering wheel mounted shift paddles. The Daytona package adds a 3.06 rear gear, a high speed engine controller and a performance tuned steering and suspension setup.

Inside, the 2013 Dodge Charger Daytona has an interior layout featuring black surfaces with blue trim and embroidery. The basic Charger R/T fitted with the Daytona package features custom sport cloth seats in black with “Daytona” stitched across the seat back while the Charger Road & Track models feature black Nappa leather and suede heated/ventilated seats with the Daytona logo embroidered on the seat backs as well as blue piping around the outsides. All Daytona sedans will be fitted with the 8.4” UConnect touch screen infotainment system surrounded in a dark brushed aluminum trim panel with a 552 watt, 10 speaker Beats Audio sound system providing plenty of high quality sound. Finally, a set of bright Mopar pedals and a dash logo on the passenger side announcing the build number (out of 2,500) for each particular 2013 Charger Daytona built.

“With its 370 horsepower HEMI V-8, rear-wheel drive and iconic design, the 2013 Dodge Charger is a modern day muscle car, and the new Charger Daytona takes it to a new level by paying homage to the historic ‘Daytona’ nameplate,” said Reid Bigland, President and CEO, Dodge Brand. “It starts with a legendary HEMI underfoot and one-of-a-kind interior and exterior styling enhancements that perfectly combine heritage, performance and value, starting under $33,000 MSRP.”

The 2013 Dodge Charger Daytona is expected to begin arriving in dealerships around the US during the first quarter of 2013 and like all modern Dodge Chargers – the new Daytona models will be produced at the company’s Brampton Ontario production facility. The Charger Daytona has proven to be a popular package for the Mopar community and we can expect that this new Daytona will quickly see all 2,500 units shipped off to happy buyers.

With four available colors, the 2013 Daytona is offered in more colors than any other modern model year Charger Daytona sedan. In 2006, Dodge introduced the Charger Daytona in GoManGo, Top Banana and TorRed with 4,200 in GoManGo, 4,250 in Top Banana and 2,200 in TorRed. In 2007, Dodge went with 1,650 Sublime Charger Daytonas and another 1,520 in Plum Crazy for a total of just 2,900 units. In 2008, the Dodge Charger Daytona was only available in Hemi Orange with 1,750 made while 2009 brought about the Stone White Charger with just 475 built. Chrysler has not offered an idea as to how many of each color will be built for the 2013 model year Daytona but with only 2,500 slated for production, the figures for each hue should be fairly low. If the color split is left up to the buyers, I would expect that the Daytona Blue will be the dominant color choice.