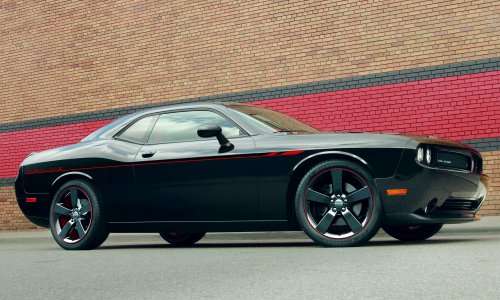 The 2013 Dodge Challenger R/T Redline will roar into Chicago

Among the introductions at next week’s 2013 Chicago Auto Show will be the 2013 Dodge Challenger R/T Redline with this sinister appearance package coming wrapped around the Hemi-powered Challenger offering 375 horsepower and 410lb-ft of torque.
Advertisement

The Redline appearance package has been previously offered for the 2012 Dodge Challenger but before the introduction of the new 2013 Challenger R/T Redline – buyers could only order the redline package with the entry level V6 engine and an automatic transmission. This meant that these sporty looking Challengers were technically the slowest possible configuration for the brawny Mopar muscle car but when the 2013 Chicago Auto Show opens next week, the Redline package will finally be unveiled for the Hemi Challengers.

The 2013 Dodge Challenger R/T Redline carries a similar design theme as the 2012 Challenger Rallye Redline beginning with the sexy 20” black chrome aluminum wheels featuring a thin red line running around the outer edge of the rim. Unique to the 2013 Challenger R/T Redline wheels is a hefty coating of bright red paint to the inner portion of the rim (behind the spokes) while the V6 rims are solid black chrome. Also, where the previous V6 Redline featured a think red stripe running along the middle of the hood, the new R/T Redline has unique two tone red and dark gray stripes running down the side of the car with the Redline logo on the rear quarter panels. The exterior portion of the R/T Redline package is finished off by a unique body colored grille surround and buyers can pick from four different exterior hues - Billet Silver, Granite Crystal, Bright White and Pitch Black. Pitch Black seems to me to be the best choice of the group but to each his own.

The 2013 Dodge Challenger R/T Redline will make its grand debut late next week when the 2013 Chicago Auto Show opens to the media with public viewing beginning next weekend.

Mahesh wrote on May 24, 2014 - 5:43am Permalink
Ford Has Been Outselling The Camaro For The Last 30Years Yet Its Been Getting Its Ass Whooped By Them And I See New camaros Like Maybe Twice A day. There Not Popular Like Early 2010. But As Far As Mustangs. Ive Seen Only 4 2011 5.0s After 5Months Wich Is Good. The Less I See The Better. I Hated Mustangs For There Shitty Performance And Over Popularity-Oh And There Down Syndrome Fan Following.Idk If Ill Ever Trully Like Em!!