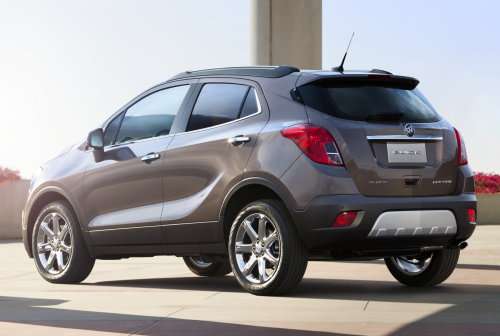 General Motors recently announced the pricing for the 2013 Buick Encore with the price for the luxurious entry level, front wheel drive trimline starting at just $24,950 (including destination of $750) and option packages bringing the price of the fully loaded Encore into the low $30s.
Advertisement

The 2013 Buick Encore is slated to compete with the likes of the BMW X1 in the compact luxury sport utility segment and with a price starting under $25k – the Encore is quite a bit less expensive than the German competition. That price includes a 7 inch high resolution infotainment screen with a rearview camera system, 18” wheels and a Bose Active Noise Cancellation system. Adding all wheel drive adds $1,500 to any package so a base model 2013 Encore AWD model will set you back just $26,450 US dollars. The least expensive four wheel drive model 2013 BMW X1 is the xDrive28i, which carries a starting price of $33,245 – giving the Encore a price advantage of almost $6,800.

In addition to the base model, the 2013 Buick Encore comes in three optional package forms including the Convenience Group, the Leather Group and the Premium Group.

-The next step up is the 2013 Encore Leather Group begins with the features of the Convenience Group and adds leather seats, heated front seats, a heated steering wheel, and dual front power seats with driver memory with a price starting at $27,460.

-The top of the line package is the 2013 Buick Encore Premium Group, which begins at $28,940 - $30,440 with all wheel drive. This package begins with all of the features of the Convenience Group and Leather Group, adding rain-sensing windshield wipers, front and rear park assist, Forward Collision Alert with Lane Departure Warning, a rear cargo area mat and a premium 7 speaker Bose audio system with subwoofer.

Much like the optional $1,500 all wheel drive system, 2013 Buick Encore buyers have a variety of other premium amenities that can be added on regardless of the package chosen. These include a $795 navigation system, $995 18” chrome wheels, an $800 power sunroof, and a premium Bose sound system for $595 – although this exhaust system is standard in the Encore Premium models.

When you load up the 2013 Buick Encore with the Premium Group (starting price of $30,440 with AWD) with navigation, 18” chrome wheels and the power sunroof, the price comes to $33,030. If you build a 2013 BMW X1 with similar features such as the heated steering wheel, parking assist, rear view camera, power seats with driver memory, auto dimming mirrors, full leather interior, and navigation, the price of the X1 sits around $40,595 – giving the Encore a substantial advantage of $7,565.

The biggest difference between the two luxury compact SUVs is the power output as the 2013 Buick Encore comes with a turbocharged 1.4L 4-cylinder packing 140 horsepower and 148lb-ft of torque while the BMW X1 packs a turbocharged 4-cylinder of its own measuring 2.0 liters and packing 240 horsepower and 260lb-ft of torque. The BMW offers a significant advantage in power but with a best fuel economy measure of 24mpg around town and 33 on the highway – the Buick Encore has as slight advantage offering 25 around town and 33 on the highway. The matchup between the 2013 Buick Encore and the 2013 BMW X1 will come down to whether or not consumers are willing to pay an upcharge of at least $6,800 extra for the added power of the BMW crossover or if the compact SUV market will lean in favor of affordability and efficiency.