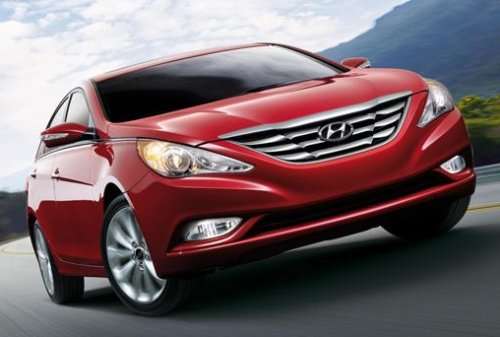 The 2012 Hyundai Sonata SE: efficiency and luxury sans the leather

I recently had a chance to log a few hundred miles in the 2012 Hyundai Sonata SE with the standard 2.4L GDI engine, the mid-level package for the company’s bestselling vehicle in the US which offers an incredible number of luxury goodies with the only thing missing being leather surfaces.
Advertisement

The 2012 Hyundai Sonata is offered in three trimlines – GLS, SE and Limited – with the buyer’s option of either a 2.4L naturally aspirated 4-cylinder or a smaller, turbocharged mill that displaces 2.0L that is only available with the SE and Limited packages. Our 2012 Sonata test car was fitted with the SE trimline and the standard 2.4L engine but with the help of the SE Navigation and Sunroof package; there was very little that our test vehicle did not offer.

The Exterior
Excluding the design changes made to the Sonata Hybrid, the 2012 Hyundai Sonata SE looks pretty much the same as the rest of the current Sonata lineup and that begins with the uber aggressive styling across the front end. Some might dislike the family look of the Hyundai brand but with the wide, sprawling chrome grille, the inward angled headlights and the hard body lines that wrap into the front fascia from the side of the vehicle – the Sonata sports a very distinct styling. Some people may not like the design of the Sonata but, much like the rest of the brand lineup, the midsized Sonata draws attention (and deservingly so) for standing out in a class that was once occupied by very bland vehicles. The midsized sedan class is packed full of popular vehicles and offering a stand-out design has become very important – which is one advantage displayed by the 2012 Sonata SE.

While the 2012 Hyundai Sonata SE is just a step above the entry level GLS model, the exterior features a variety of goodies that are unheard of among other brands’ midsized, mid-level offerings. This begins with items like the 18” aluminum wheels, folding power exterior side view mirrors, fog lights and that big, bold chrome grille. Following the chrome scheme up front, the Sonata SE features a chrome strip running high along the side of the vehicle along with chrome door handles and a chrome applique that runs between the Sonata’s tail lights. The Sonata SE also features integrated chrome exhaust tips that are not available with the Sonata GLS but they are offered with the Limited models equipped with the 2.0L turbo models.

Overall, the 2012 Hyundai Sonata SE has a very fast look with a long greenhouse that is fairly flat, working with the upward sloping hood line and the short trunk lid to provide a very sleek shape. A sharp body line forms at the rear edge of the front fenders and cuts up along the side of the car, meeting with the corner of the tail lights to give the car prowling stance that is exhibited throughout many of the modern Hyundai vehicles. While the angular front end design is more radical than the rear end, the angled tail lights help to bring together the aggressive, fluid design of the 2012 Sonata. Some consumers might complain that the 2012 Hyundai Sonata exterior design is too aggressive and too distinct for their tastes but those people are likely driving an ultra bland vehicle that looks like everything else built in the same era as their vehicle. If you aren't afraid of standing out in the midsized sedan class – the Sonata is the answer.

The Interior
Once you equip the 2012 Hyundai Sonata SE with the $2,900 SE Navigation and Sunroof package, there is very little that isn’t included in this midsized sedan. Standard for the Sonata SE is remote keyless entry, push button start, 8-way driver’s seat controls, heated front seats, air conditioning, a leather wrapped steering wheel featuring audio controls, phone controls, cruise control buttons and paddle shifters, USB connectivity, and sport seats with cloth inners and leather bolsters. The SE Navigation and Sunroof package adds a power tilt and slide sunroof, a high tech navigation system with a large touchscreen display, a rear view camera system, a Dimension premium audio system and HD Radio. The only thing that you will not find in the Sonata SE is fully leather clad seats and rear heating elements but for those who don’t like burning themselves on hot leather seats in the summer – these cloth sport seats are a welcome feature.

The large touch screen of the 2012 Hyundai Sonata SE is mounted high on the center stack, offering control of the sound system and navigation program although those who prefer traditional buttons can use the spread of buttons located just under the screen – or they can use the controls mounted on the steering wheel. This design puts everything well within the reach of the comfortably seated driver but unlike some other vehicles, the driver-centric infotainment system does not put the system out of reach of the passenger. Below the stereo and navigation controls sit the HVAC controls that are unique yet incredibly simple. Two large knobs allow you to change the fan speed or desired temperature while the fan direction is selected by a series of buttons shaped like an abstract person seated in the car. Click on the face and the air comes out along the windshield; click on the chest (center) section and the air blows from the dash face and clicking on the legs of the little person sends the hot or cold air from the lower dash area.

The gauge cluster uses a basic two-gauge design but the white and blue lighting of the 2012 Hyundai Sonata SE makes for some great looking gauges. The left gauge reports the engine RPM with a smaller gauge inside that displays the engine coolant temperature while the right right side gauge prominently displays the vehicle speed with a smaller fuel gauge in the middle. There is also a small readout between these two large segments that displays vehicle information including average fuel economy, fuel range and other efficiency figures.

The front sport seats of the 2012 Hyundai Sonata SE are comfortable and provide a solid grip during spirited driving while the rear seat is more of a traditional bench design with a center armrest that pulls down when there is no one seated in the rear middle position. There is more than enough room for the driver and front passenger all around while taller rear riding passengers seated behind a taller passenger or taller driver might find leg room a little tight. However, though the trunk lid is short, there is tons of space in the trunk but the long roof line allows for a tremendous amount of headroom for rear riders.

The Drive
The 2012 Hyundai Sonata SE comes with a standard 2.4L naturally aspirated engine that sends 200 horsepower and 186lb-ft of torque to the front wheels via a 6-speed automatic transmission. Those who want more power can opt for the 274 horsepower turbocharged 2.0L engine but if you are more concerned with fuel economy than high performance – the standard 2.4L engine is a great choice. Hyundai claims that the 2.4L Sonata SE will achieve 24mpg around town, 35mpg on and highway and a combined figure of 28 miles per gallon and in my experiences, these are figures that are very easily achieved. I have a heavy foot and I tend to travel towards the upper edge (or slightly above it) of the speed limit and I found that highway, city and combined fuel economy figures were all very realistic based on the vehicle’s on board trip mileage system. More importantly, I found by doing my own math that the Sonata SE achieved right around 29 miles per gallon over the course of my testing time with the Korean sedan. In short, this is not a vehicle that you need to drive like a grandma to get those expected fuel economy figures.

More importantly, the 2.4L standard engine in the 2012 Hyundai Sonata SE provides plenty of power to get you from point A to point B with some quickness. Some midsized sedans come with more fuel efficient standard engines that sacrifice power and fun-to-drive factor for better fuel economy but the 2.4L engine in the Sonata SE has quite a bit of get-up-and-go power. The 6-speed manual transmission shifts smoothly and quietly when driving calmly around town but when you put the hammer down, the Sonata moves through the gears quickly and with a nice, positive shift. If you want some gear-banging fun, the Sonata SE comes with a standard paddle shift system that allows for a great deal of control of the shifts even though Hyundai’s system does have an automatic shift feature to prevent the driver from over-revving the engine. However, that override system doesn’t have much bearing on hard downshifts during spirited driving, which were the times when I enjoyed Hyundai’s paddle shift system the most.

The 2012 Hyundai Sonata SE comes with a standard sport tuned suspension system that allows this midsized sedan to cut confidently through the turns along with providing a nice, comfortable ride when cruising the open road. You do pickup some feel for the road through the suspension and steering system but it is not enough to make the ride rough feeling. At the same time, the smooth ride doesn’t transfer into that boat-like feel that you get with some suspension systems that are concerned too much with deadening the feel of the road in the name of a smoother ride.

The Hyundai Sonata SE with the 2.4L standard engine looks a little light on power when looking at the specs on paper but the 6-speed automatic transmission helps to make the most of the power – making the Sonata SE a fun vehicle to drive without being too sporty (read: too rough for the class). Also, with fuel economy figures that climb near 30mpg over the course of a tank of gas, the Sonata SE provides impressive fuel economy for a car that performs as well as it does.

The Final Word
After spending 8 days and almost a thousand miles behind the wheel of the 2012 Hyundai Sonata SE with the 2.4L engine, there is little question as to why this is the Korean automaker’s bestselling car in the US market and one of the top sellers in the popular American midsized sedan class. Hyundai has climbed towards the top of the sales charts in the US not by super low pricing or massive incentives but rather by pricing things comparably to the other cars in the class while also packing them full of amenities that often drive up the price among the competition.

In the long run, with an efficient yet powerful engine, the aggressive Hyundai exterior styling and an interior that offers just about everything shy of leather – the 2012 Hyundai Sonata SE offers everything that you would expect from an expensive luxury sedan shy of the price and the leather seats. Those who insist on features including leather seats with heating in the front AND rear, turn signal lights in your side view mirrors and a 400 watt Infinity sound system can opt for the pricier Sonata Limited but if you can do without those features – there is very little that is left to be desired in the Sonata SE.