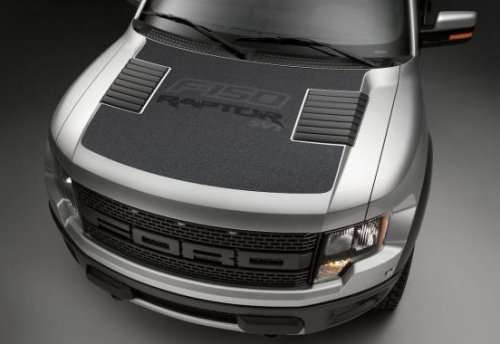 Ford has offered up their details for the 2012 SVT Raptor F150 and the Special Vehicle Team has added a couple items to make the most capable half ton truck on the market even better – tacking on a new Torsen front differential and a front aiming camera to aid in tackling the toughest terrain.
Advertisement

The Ford F150 SVT Raptor is really unrivaled by any factory built and dealership sold truck in the world, calling on extensive race and torture testing to offer a truck that can serve as a daily driver and an ideal off-road toy. The Raptor can go anywhere that any other stock truck in the industry can but owners who put their SVT F150 through the ringers found that it had a tough time climbing large rocks and slippery slopes. To help fix this problem, Ford and SVT have installed a Torsen front differential that uses a helical gearset to transfer torque to the front wheel which is getting the most traction. This way, when someone is climbing their 2012 Raptor through large rocks and you get momentarily stuck with the left front tire off the ground, the Torsen differential will transfer the power to the right front wheel to help you get to the top of the hill.

Also, Ford has added a front-facing camera that is mounted in the grille right above the Raptor specific Ford logo and displays what is directly in front of the truck on the large 8” nav screen mounted in the center console. The front facing camera is controlled by the 4” driver’s information screen found in the gauge cluster and it turns on when the truck is going slower than 15 miles per hour. This allows die hard off-roads to navigate through a tight area, carefully watching out for any jagged rocks or unfriendly trenches that could present an issue to the Raptor’s tires. While this is mounted in a location where it is likely to get dirty, the front camera system features a sprayer system to clean it off and when viewing the video sent from the grille of the truck to the 8” screen, the system shows both dynamic and static displays to let you know where you are headed with the given steering wheel angle. This system sounds like it is essentially the exact same system that is available as a backup system on the current Ford F150 lineup and it that is the case, it sounds like a fantastic feature to be able to check out what you are about to run over.

Finally, the 2012 Ford F150 SVT Raptor comes with a new set of 17” aluminum wheels in black and silver that allow the 2012 models to stand out from the 2011 SVT F150s. inside, the 2012 Raptor gets a new matte anodized blue interior color accent package, with package specific upgrades throughout the entire interior so there is no second guessing that you are riding in the SVT Raptor.

Even if you aren’t an off-roader and you still want the high performance Raptor F150 with goodies like the front camera system, the SVT pickup is still among the most powerful and capable trucks on the market. However, if you are an off-roader and you want a daily driver that is already fitted up with all of the items needed for a great off road toy, the 2012 SVT Raptor F150 has only gotten better.

Check out the gallery on the right of the 2012 SVT Raptor!

Car guy wrote on October 3, 2011 - 2:07pm Permalink
Now the car will better bite the tractions. One needs to know some engineering to know what Torsen is. The company has been playing with the Ford F-150 SVT Raptor 's front end for a while.