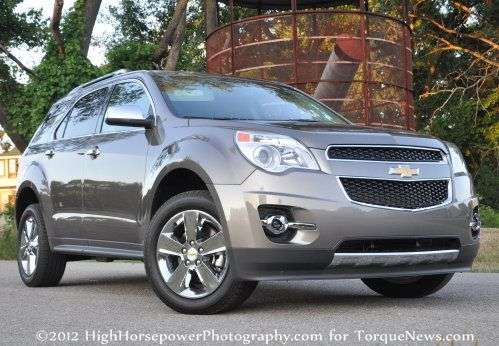 The 2012 Chevrolet Equinox AWD LTZ is the top of the line trim package for the smallest of the Chevy sport utility vehicles and the level of detail inside allows this compact SUV to offer luxury comforts with a price well below comparably equipped models around the industry.
Advertisement

While the majority of prospective General Motors sport utility shoppers who are looking for luxury head for the likes of the Cadillac lineup, the 2012 Chevrolet Equinox LTZ packs a luxury setting into a very unassuming form. Not many people are quick to associate Chevy with luxury – considering that the majority of the brand’s most popular models have been performance cars that pack more power than comfort – but the 2012 Equinox LTZ brings a touch of luxury to an affordable Chevy SUV.

The 2012 Chevrolet Equinox AWD LTZ is the top of the line package and in addition to the LTZ trim adding lots of goodies inside – it also adds tons of chrome on the outside. Across the front end, the Equinox LTZ big, bright headlight assemblies are accompanied by chrome trim around the upper and lower portion of the grille, around the fog lights and along the lower front fascia. That chrome trim is set off by the matte black grille openings, the trim around the fog lights and on either side of the lower fascia with the rest of the big, bold front end finished in body color while a gold “bowtie” logo right in the middle of the split grille makes it impossible to mistake the brand of this vehicle.

Along the side of the 2012 Chevy Equinox LTZ, there is plenty more chrome with bright polished trim around the side windows, on the door handles, on the side mirror caps and on the sides of the roof rails. My Equinox test vehicle was fitted with the optional 18” “chrome clad” aluminum wheels – adding that little extra bit of bling to the sides of the compact Chevy ute. The B pillar is finished in black, giving a more seamless look through the dark tinted side glass but the body colored C pillar and sharply angled rear windows that wrap around to the back of the vehicle offer some edgy design and improved visibility.

Out back, the pillars for the rear liftgate of the 2012 Chevrolet Equinox are painted black for that solid glass look and the large tail light assemblies mounted high and towards the outer edge of the body provide plenty of hard-to-miss light for other vehicles in the vicinity. Following the theme across the front and sides, a thick chrome appliqué rests just above the license plate area with another gold Chevy “bowtie” while the lower rear fascia is almost entirely chrome between the chrome dual exhaust tips.

My 2012 Chevy Equinox LTX test vehicle was coated in the Mocha Steel Metallic exterior paint and while this wasn’t a bad looking color by any means – it wouldn’t be my first choice. Were I to buy a new Equinox, I would go for the Crystal Red Tintcoat but for those who like to blend in a little more with their surroundings, the Mocha Steel looks good on this particular vehicle.

The 2012 Chevrolet Equinox AWD LTZ takes a very subtle approach at offering a classy look with lots of chrome, taking more of a luxury approach to this compact sport utility vehicle.

The Interior
The 2012 Chevrolet Equinox AWD LTZ looks great on the outside but when you open the doors – you really see the luxury additions of the LTZ trimline. This begins with the standard leather package that, in my test vehicle, was finished in the Jet Black and Brownstone trim choice. There are other color options for the Equinox LTZ but this two tone layout really looks fantastic. The Jet Black/Brownstone layout looks best on the seats, which have brown seating surfaces and headrests with black edge trim in the front and outer rear seating positions – all of which are accented with both red and black stitching throughout. The two tone seats are nestled into the interior which carries over that black-and-brown theme on the door panels, along the center console, and across the dashboard. Finally, satin silver trim pieces on the door handles, around the gauges, on the steering wheel, and around the HVAC vents really bring together the luxury feel of the interior.

Great looks aside, the 2012 Chevrolet Equinox AWD LTZ offers more than enough room to comfortably seat four adults with enough room in the rear middle seat to fit a child. With the front seats adjusted to allow for plenty of leg room for the driver and person riding shotgun, there is an impressive amount of leg room for rear passengers in excess of 6 feet tall while the high roofline makes for plenty of headroom for everyone inside. There is also a good amount of elbow room across the center console for the driver and front passenger – a feature that you don’t always get from smaller SUVs. There is also plenty of room to stow things in the large glove box and front center console, both of which could be ideal hiding spots for a ladies purse or a man’s fanny pack.

A top of the line package would be nothing in the modern era of automobiles without gadgets and the 2012 Chevrolet Equinox AWD LTZ doesn’t disappoint in that category either. The Equinox features a touch screen mounted high on the dash that controls the sound system and the navigation system but for those who don’t have the patience for the touch screen controls, there is a collection of traditional buttons and knobs mounted just below the touch screen in addition to the controls mounted on the steering wheel that allow the driver to make adjustments without taking his or her hands off of the wheel. Also, unlike many companies who mount an infotainment screen high on the dash only to have it exposed to the glare of the sun that makes it difficult to see and use – the Equinox touch screen is mounted under a very low profile “hood” that makes it very easy to read in any lighting condition. Most importantly, everything is very easy to use…no need to schedule classes at your local Chevy dealership to learn how to change the radio station.

The 2012 Chevrolet Equinox AWD LTZ advertises 16 miles per gallon around town, 23mpg on the highway and a combined figure of 19mpg. While these figures are far from showstoppers in the modern compact SUV segment, the Equinox delivers on the advertised fuel economy figures without having to drive 15mph under the speed limit everywhere you go.

Overall, the interior of the 2012 Chevrolet Equinox AWD LTZ offers a very classy look but far more importantly – there is gobs of space for every seating position. This isn’t a compact SUV that is going to make your rear riding passengers feel like they are crammed in and when you need more space than is offered by the rear cargo area, the rear seats easily fold down to make for an incredibly large hauling area. Combine all of that room with the comforts of the leather seats and the state of the art infotainment system and you have a compact SUV that can hang with far more expensive luxury models.

The Drive
While I understand that vehicles like the 2012 Chevrolet Equinox AWD LTZ are not really made to go fast – it does not mean that they shouldn’t offer that certain “fun to drive” factor. However, even when equipped with the optional 3.0L V6 which packs 264 horsepower and 222lb-ft of torque, the Equinox feels a little heavy under hard acceleration from a stop or when trying to climb to higher speeds on the highway. Again, this is not a primary concern of many compact SUV buyers but for those who are looking for something with some get-up-and-go…the 2012 Equinox may not quench your need for speed. The good news is that for the 2013 model year the 3.0L V6 is being replaced by the 3.6L V6 that is in use across pretty much the entire General Motors vehicle lineup and with 301 horsepower and 272lb-ft of torque, the new V6 engine option should definitely go a long way in giving the Equinox more gusto from a stop and on the open roads. However, with the current V6 engine there is more than enough power to comfortably keep up with 70 mile per hour traffic with enough low end torque to allow you to merge into rush hour traffic with just a shade of patience.

Aside from the fact that I found the 2012 Chevrolet Equinox AWD LTZ to be a little light on power, there was very little else to complain about in terms of the drive. Whether you are on rougher tertiary roads or highways with that hard seam bump every few seconds, the Equinox provides a nice smooth ride with very little wind or road noise inside of the cabin. The Equinox is easy to negotiate through tight spaces (like the mall parking lot) and while there is some body roll at higher speeds – the compact Chevy SUV handles very well in all situations. The Equinox is very steady on longer, gradual turns at highway speeds while feeling very safe and confident on twisty back roads.

While the slightly underpowered V6 engine option in the 2012 Chevy Equinox might not make this compact SUV particularly inspiring to drive – the power output is very adequate for the average SUV driver. I don’t mean that to be insulting to the vehicle or to any drivers but honestly, I expect that many prospective new SUV buyers will find that there is more than enough power to do what they need this vehicle to do. Those who really need their Equinox to go faster should start checking with their dealerships for 2013 models with the new V6 – which I suspect will fix the biggest issue with the 2012 Equinox. Most importantly, the Equinox is very driver-friendly, with a quiet comfortable ride that fits with the luxury theme of the LTZ package.

The Final Word
The 2012 Chevrolet Equinox AWD LTZ is one of General Motors’ bestselling models for a reason – as it does exactly what most consumers today expect. It isn’t going to go out and win many races but realistically that won’t make any difference to most buyers. However, what will make a difference to most buyers is loaded leather interior, the smooth ride quality and the overall ease of use that applies to every aspect of the Equinox experience. With a price in the low $30k range, the Equinox LTZ provides a great deal of content for the money with an emphasis on comfort both in terms of the interior amenities and the drive quality.

Suthy wrote on August 24, 2012 - 11:46am Permalink
every car you have reviewed so far has been perfect in your eyes. Do you get pancackes with that syrup suckin up to the auto companies?