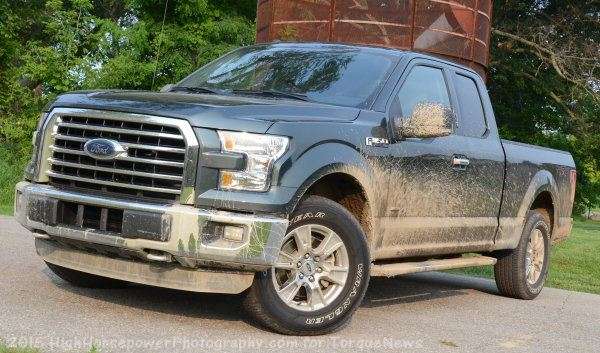 I recently had a chance to spend a week driving the 2015 Ford F150 XLT with the 2.7L EcoBoost V6 engine and while enjoying the segment-leading fuel economy, I was also able to put this tiny economy engine through the same hard-working tests as every other new truck – and the new super-efficient EcoBoost engine never failed to impress me.
Advertisement

Over the past few years, Ford has used a 3.5L EcoBoost V6 to top their F150 engine lineup and while this engine was the most fuel efficient in the lineup, it was also the most powerful and the hardest working – leading the lineup in towing capacity. With the introduction of the new 2015 Ford F150 came a new EcoBoost V6, measuring 2.7L and offering fuel economy figures that made it comfortably the most fuel efficient gasoline powered truck in the segment.

Based on the EPA ratings, the 2015 Ford F150 XLT 4WD with the 2.7L EcoBoost V6 can expect to get 18 miles per gallon around town, 23mpg on the highway and 20mpg combined, making it a segment leader among half ton gas trucks.

That is nice, but the fuel economy leader battle among the half ton trucks is one of inches, so the lead over the closest competitors in MPGs is slim. That slim margin makes you wonder if opting for this smaller efficiency-minded package is worth the compromise in working capabilities, but in my experiences – the 2.7L EcoBoost doesn’t come with any sacrifices for the vast majority of truck owners who actually use their half ton trucks like trucks. Plenty of people will point out that a great many newer half ton truck owners in the United States don’t spend much time towing or hauling, so strong fuel economy figures can play a big role in which new pickup someone buys when that person never uses the bed or the hitch. However, there are a great many newer truck owners – and new truck shoppers – who might not tow every day or even every week, but they still want the ability to pull a decent sized trailer from time to time.

In short, the 2015 Ford F150 XLT 4WD with the 2.7L EcoBoost V6 might just be the perfect truck for the buyer who wants a truck that can pull a nice sized trailer, comfortably handle a heavy load and still get segment leading fuel economy when not all loaded down. Also, at no point in my test time did I find that the aluminum body made this truck anything but one of the best on sale today.

Hauling 1,000lbs of Grain
The first test for my 2015 Ford F150 was a trip to the grain store, where I purchased a half ton of bagged horse feed to load into my EcoBoost-powered half ton Ford truck.

Some people automatically believe that because it is a V6 that gets class leading fuel economy figures, the new 2.7L has to be a pig in terms of power, but that couldn’t be further from the case with the new EcoBoost V6. While it is the most efficient gas powered truck on sale today, this F150 still packs 325 horsepower and 375lb-ft of torque, so it is a far cry from the super-efficient engines from past years where MPGs came first and power came last. While these figures make it the second least powerful engine in the current F150 lineup, those figures comfortably trump any V8 engine from the F150 in the early 2000s.

On the way to the feed store, I was able to experience the acceleration capabilities of the 2015 F150 with the 2.7L EcoBoost and I was truly shocked at how hard this little engine moves the big Ford truck. I strongly believe that if you put the average truck shopper in a new F150 with the 2.7L EcoBoost – but told them that it was the more-powerful 3.5L EcoBoost V6 – they would walk away impressed by how powerful this truck is. Of course, once those same folks drove an F150 with the 3.5L EcoBoost, they would quickly feel the difference, but the 2.7L EcoBoost really is that good. The power comes on quick and hard, affording this lightweight half ton truck solid acceleration when unloaded – but could it handle an extra 1,000 pounds in the bed? Well, after loading 1,400lbs of bagged horse grain into the bed of the 2015 F150, I headed out onto the road. When I pulled out of the parking lot, I straightened the truck out on the road and climbed up to the posted 50mph speed limit without any real fuss. I don’t want to say that I couldn’t feel the extra weight, but the reduction in simple acceleration was only slightly reduced, basically requiring me to give the Ford a little more gas to get up to speed. Even then, the 2.7L EcoBoost V6 barely broke a sweat getting up to speed and during the basic acceleration of normal driving situations.

In other words, the 2.7LEcoBoost V6 very comfortably went through the paces of hauling a thousand pounds of grain on my 20 mile drive, which included highway driving at 70mph, some curvy roads that tested the handling of the F150 and some stop and go city driving. I believe that if you could strap the weight down in a way that it wouldn’t make any noise and cover the load so that someone couldn’t see it, a new driver of the 2015 F150 would still be impressed with the acceleration of this efficient pickup.

In the same way that the original 3.5L EcoBoost V6 offered awesome power, the 2.7L EcoBoost packs plenty of power to get this truck up to speed in a hurry – even when you add a thousand pounds to the curb weight.

Towing a 5,000lb Trailer
After getting the grain back to the stables and hauling some wood around the grounds, it was time to hook the 2015 Ford F150 XLT up to my 5,000lb test trailer. My 2015 F150 test truck had a towing capacity rating of 7,600lbs, which doesn’t sound all that impressive with so many trucks pulling up past the 11,000lb mark, but the truth is that the vast majority of people who do tow from time to time don’t tow 11,000lb trailers. They pull things like jet skis, utility trailers and my little horse trailer – all of which weigh way under 11,000lbs. Heck, even if you rented a 2,200lb UHaul car trailer and loaded a Hellcat Hemi Challenger (the heaviest muscle car on the market), you would still be almost a thousand pounds below the maximum towing capacity of my 2015 F150 2.7L EcoBoost test truck.

I use the exact same trailer for all of my towing tests, so long as the vehicle will tow at least 5,000lbs safely (per the manufacturer) and of the half ton trucks I have tested in the past year, this F150’s towing capacity was one of the lowest. With most trucks, my 2-horse trailer is less than half of the maximum towing capacity, but I was using up about two thirds of the capacity in this test. Even with that in mind, the 2015 Ford F150 pulled my test trailer beautifully. I pulled out onto the road and accelerated up to the 50mph speed limit with the transmission set to tow/haul mode. This stretches the lower gears out more for better lower speed performance and as a result, the torquey little turbo-6 pulled my trailer around town with no problem. The 2.7L EcoBoost provides plenty of power to get up to speed from a stop at a reasonable rate and when riding in traffic around town (35-55mph), this efficient little engine has no issue getting back up to speed when I had to slow down for people turning or other interruptions in my path.

After logging about 40 miles in town/city settings with the 2015 F150 hooked to my test trailer, I hit the highway to see how the small engine handled the trailer at higher speeds. The highway speed limit around me is 70 and with the horses, I never exceed that speed limit so my highway speeds when towing anything living are restricted to 65-70mph. At those speeds, the 2.7L EcoBoost didn’t feel quite as strong as the 3.5L EcoBoost, and when I hit hills without a proper run, I had to ask for a little more from the 2.7L than I have the 3.5L F150 in past tests. The 2.7L EcoBoost still pulled my test trailer very well, but on steeper grades, it did have to work a bit harder than the bigger, less efficient engines in the half ton segment.

However, at the end of my 3 hour drive hooked to the 5,000lb horse trailer, I would give the 2015 Ford F150 with the 2.7L EcoBoost a solid A, with the likes of the 5.0L V8 and the 3.5L EcoBoost V6 being A+ towers. Also, while this serves as little more than a nice bonus, the 2015 F150 muffles more trailer noise than any truck I have tested, with almost none of the rattles from the horse trailer making it into the cabin of the new F150.

The Final Word
At the end of the day, if you are someone who tows a ton and who really wants a truck that effortlessly pulls a fair sized trailer, you are going to want to opt for the 2015 Ford F150 with the 3.5L EcoBoost engine. However, if you are looking to occasionally pull a horse trailer, a jet ski trailer or maybe a quad on a small utility trailer on the weekend – while getting awesome fuel economy for a full sized 4WD truck under normal driving circumstances – the new 2.7L EcoBoost V6 might just be your best bet for the money. I can confidently say that any “Average” driver shopping for a new half ton truck right now will be impressed with the power of the 2.7L EcoBoost V6 while loving the fuel economy capabilities and when the need arises to haul a thousand pounds or two five thousand pounds, this little twin turbo V6 does not disappoint.