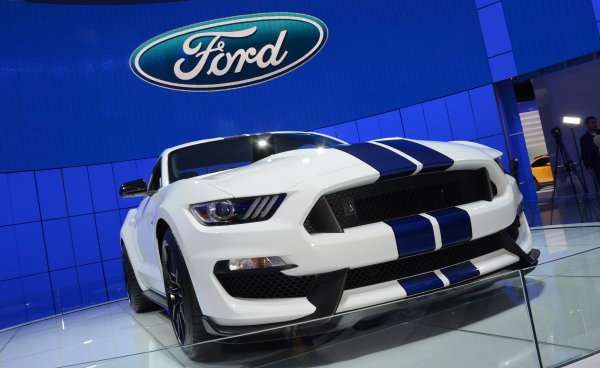 While Ford Motor Company is focused on the launch of the new Shelby GT350 Mustang, the muscle car community is still eagerly discussing the prospect of a GT500 Mustang to rival the Dodge Challenger Hellcat and in those discussions, two interesting rumors have cropped up – including a Mustang with the monster EcoBoost from the Ford GT and a forced induction version of the GT350 flat plane V8.
Advertisement

I should start by stressing that Ford Motor Company hasn’t offered up any official word at all on the future of a new Shelby GT500 Mustang, but does anyone really believe that Ford will just go on letting Dodge brag about having the most powerful muscle car ever without any competition? I don’t think so, and neither do most muscle car fans. Even though the new GT350 will likely be the best-handling muscle car ever, the longstanding popularity of the supercharged top of the line Mustang and the demand for a street-legal, straight-line beast leads everyone to believe that, sooner or later, there will be another big power Shelby Mustang from your local Ford dealership.

Based on that belief, there are two interesting rumors that have popped up online, both of which offer fairly possible scenarios for which engine will motivate the next Shelby GT500 Mustang. There are probably a great many more than just two rumors about the GT500 Mustang engine possibilities, but these two seem to be the most popular and – at least in my opinion – the most likely to come true.

The Ford GT EcoBoost V6
It seems hard to imagine a premium high performance Ford Mustang with a V6 engine, but the new twin turbocharged EcoBoost V6 that powers the new Ford GT supercar would make a lovely powerplant for the next generation Shelby GT500 Mustang. The GT is expected to deliver at least 600 horsepower and 600lb-ft of torque, and even if the actual numbers stay at 600 and 600, that would still make for one mighty quick new Shelby Mustang.

Were the new GT500 Mustang to have an EcoBoost V6 with 600 horsepower and 600lb-ft of torque, it would not pack more power than the Hellcat Challenger, but it might make the Mustang the quickest of the modern muscle cars. The Hellcat Challenger weighs around 4,500lbs while the 2015 Mustang GT weighs just 3,700lbs, so that 800lb advantage could help the Mustang fight the Challenger on the quarter mile – although it would be a tough fight even with the 800lb advantage. Maybe, just maybe, the GT500 could benefit from the many weight saving efforts of the 2016 GT350, so it could be more than a thousand pounds lighter than the Hellcat cars.

The two problems with this rumor is that a 600hp GT500 Mustang wouldn’t allow Ford to dethrone the Hellcat Challenger as the most powerful muscle car ever and it is still hard to imagine the most powerful Mustang in the lineup coming with a V6 engine – even one that has 600+ horsepower.

Twin Turbocharged Flat Plane V8
The 2015/2016 Shelby GT350 Mustang is powered by a new flat plane V8 measuring 5.2 liters and offering 526 horsepower and 429lb-ft of torque with the naturally aspirated induction setup. With the production numbers of the new Shelby GT350 and GT350R expected to be fairly limited, it seems unlikely that Ford would go to the trouble to develop this flat plane V8 for just the GT350.

Well, it just so happens that Ferrari uses a flat plane V8 in the new California T. That engine is only 3.8 liters, but it delivers an awesome 551 horsepower, so were Ford to take their new 5.2 liter flat plane V8 and add some forced induction – the power levels could very easily rival the Hellcat Challenger. Figure that the Ferrari California T features a volumetric efficiency figure of 145 horsepower per liter. Were Ford to achieve similar efficiency from their boosted flat plane, they would have a 5.2L V8 that delivers 754 horsepower – more than enough to knock the Hellcat Challenger from its high horse.

Best of all, there is no clear reason why Ford couldn’t come up with a twin turbo GT500 based on the flat plane V8. They have the engine, they clearly have the turbocharging knowledge and they have already shown off their take on a twin turbo V8 Mustang with the old Cobra Jet Twin Turbo Concept from SEMA a few years back. Ferrari has shown that the flat plane construction can be used to create big power with forced induction, so there is seemingly no good reason why a boosted 5.2L V8 couldn’t power the next Shelby GT500 Mustang.

Our fingers are crossed.

Jim Guidry wrote on July 30, 2015 - 9:28am Permalink
I enjoy this website !
sTEVEp wrote on May 30, 2016 - 4:19pm Permalink
The 2013/14 Gt 500 is not only a straight line car. It can hang or drfeat some of the best out there.
Jason wrote on August 18, 2015 - 7:44pm Permalink
Twin turbo FPC... I just soiled me pants.
Troy Smith wrote on February 7, 2016 - 4:28pm Permalink
The GT 500 would be bad to the bone to do an all wheel drive with carbon fiber wheels to reduce unsprung weight and add the 5.2L twin turbo flat plane. Hmmmm. I'm in. That would be the baddest coolest car on the planet. Of course none of us actual drivers would ever be able to afford it thanks to dealers "treating us like family" during the price gouging frenzy that would ensue. Maybe Ford should set up a deal where we could order our cars directly and just pay the dealerships a delivery flat fee of say $1,500. That way the true drivers of these cars could actually get our hands on one instead of being priced out of the market and all these pieces of automotive history will just wither away in temperature controlled environments instead of making history on the roads.
Victor Byrd wrote on March 5, 2016 - 1:19am Permalink
No thanks on the turbos. Superchargers are the only way to get quick, instant power to the ground.
Cameron wrote on March 10, 2016 - 5:14pm Permalink
Is it just me or do you think Ford should quit making Shelby cars. It seems dishonest to call a car a "Shelby" when Carroll has passed on and can no longer add his expertise. I know Ferrari still sells cars even though Enzo is gone but that is different because he owned a car company. Henry Ford is gone but Ford continues to make cars. The difference was Carroll's racing tweaks to make the car a "Shelby". They should keep the cobra name and SVT on the car but stop short of calling the car a Shelby in my opinion.
Max wrote on May 8, 2016 - 12:01pm Permalink
Cameron, I agree with you that Cobra should make a return since switching to Shelby among other things seemed to have moved the price gouging of the halo Mustangs to the next level (04 Cobra only cost 34k new while 07 GT500 was 49k). Despite this, Ford bringing Cobra back would be developmentally the same as keeping the current Shelby. Due to how they are actually manufactured today, Ford is well within their rights to do what they want with the trademarks. Back in the 1960s when Carroll Shelby first developed the Cobra roadster, it was made possible via cooperation and a partnership from Ford who supplied the engines. When he developed the GT350, it was once again a partnership as Henry Ford II commissioned him to turn the Mustang into a Corvette beater on the track. When he created the GT500 line of street muscle cars, it was with Ford sending him bare bones bodies and or minimal equipment and supplying the 428 ci big blocks for him to do with it as he pleased. Fast forward through history and you'll see that Ford purchased the Cobra trademark and began using it on non-roadster vehicles that they had dveloped in-house to include the Mustang Cobra and the Gran Torino Cobra. Fast forward again and the same in house SVT guys that had been hot rodding Ford vehicles for decades capitalized on the retro Mustang designed in 05 and developed the next gen "Cobra" and named it GT500 as Ford had secured the trademark from Shelby by then. Carroll Shelby's involvement was mainly that of a consultant to get certain cues correct. Most people incorrectly assume that Shelby American is the producer of the GT500. Heck, I've even met Mustang haters who refuse to believe that the GT500 is wholly developed and engineered under the Ford SVT umbrella so they can still have the excuse they need to like the Shelby GT500 while still being able to dislike Mustangs. I know you don't fall in this camp but my illustration just goes to show that Ford purchased the trademarks and simply chose when and where to use it. Due to this fact, they have the right to continue using it or change it at will. My only reservation is that when the 390hp 03/04 Cobra coupe was brand new, it was more of a performance bargain in an era where 400hp was the power of sports cars and 500hp was the power of exotics. The GT500 at 550 to 662hp still keeps pace with sports cars but when and why did it become acceptable to sell a halo car that once costed 34k, for 60 to 70k. I feel that the Shelby trademark royalties diluted some of the bargains the Terminator had established and have secretly wished Ford did away with using the trademark.