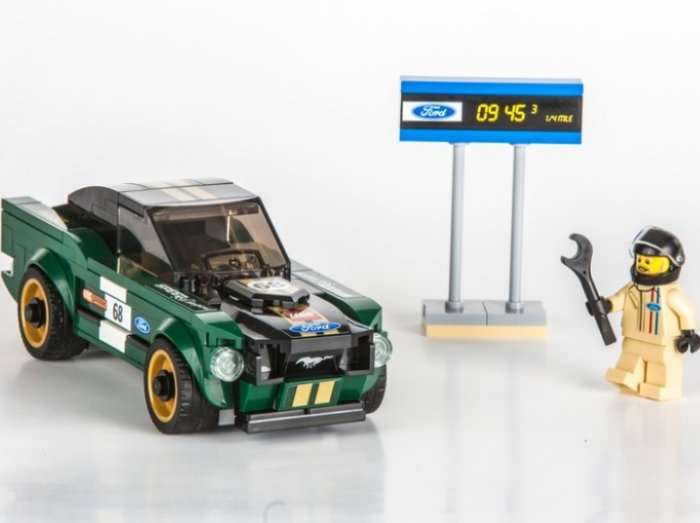 Ford recently announced a new 1968 Mustang Lego kit that comes with a timing board that reads 9.453 seconds, leading us to wonder if the Motor Company might be teasing a 9-second quarter mile time for an upcoming model – such as the Shelby GT500?
Advertisement

Ford Motor Company has proven that they like to tease future products in company photos, most recently announcing the projected horsepower of the 2018 Mustang GT in an image of the new gauge cluster. Before that, the automaker teased the new Bullitt Mustang that was introduced last month in Detroit in a video featuring Dwayne “The Rock” Johnson from early 2017 in which the dark green package was shown in the background. The company also used a classic Bullitt Mustang in marketing material for the 2018 models, but the bottom line is that Ford has previously used seemingly unrelated marketing materials to tease future models.

In fact, it is believed that the 2019 Ford Mustang Shelby GT500 might have 772 horsepower and 743lb-ft of torque because those numbers appear in the gauge cluster of the 2018 Mustang in the newest marketing materials. We won’t know if that information is accurate until the supercharged muscle car is introduced, but having revealed power numbers this way in the past – the company might be doing it again.

Now, this is far-fetched, but there is a chance that Ford is forecasting a 9-second quarter mile time from a future model with help from the new 1968 Ford Mustang Lego kit.

Since these pictures have surfaced, several people have written me to ask if the 9.453-second time might be a hint to the quarter-mile capabilities of the upcoming Shelby GT500 Mustang. I am skeptical that it will be that quick, but it is at least worth discussing until we know more about the car.

To get an idea of whether or not this is possible, let’s look at the only other 9-second American car – the 2018 Dodge Challenger SRT Demon. That car has an 8-speed automatic transmission, 840 horsepower, 770lb-ft of torque, a curb weight around 4,300lbs and it ran an NHRA-verified time of 9.65.

Based on the figures above, the GT500 would have about 70 less horsepower and 27lb-ft less torque, but it would also weigh around 500lbs less. That would give the Mustang a better power to weight ratio than the Demon (4.9lbs/hp to 5.1lbs/hp), so in theory, it could run better stock quarter mile times. Also, provided that the GT500 got the new 10-speed automatic transmission similar to the one in the Camaro ZL1 and the new Mustang GT, it could have more aggressive gearing, leading to even better low-end acceleration.

The only problem with all of these numbers is that the 9-second Challenger is more than just a car with a ton of horsepower. Dodge fitted the Demon package with a handful of unique features that help it get down the drag strip so quickly, including an integrated TransBrake, a torque reserve system, an intercooler chiller system, a track-tuned launch control system and factory-equipped drag radials. Without the advantages of those unique features, the Challenger wouldn’t be able to run 9.60s, so even with a better power to weight ratio, it seems unlikely that the GT500 would be able to run 9.40s.

Of course, if Ford was to cook up their own TransBrake system with some sort of boost preload system, an AC-chilled intercooler system and sticky drag radials – the new Shelby GT500 might have a real shot of running 9s. That is provided that all of the other assumptions about power and weight are correct and frankly, I would be stunned if the new Mustang runs stock 9s, but with some of our readers asking, we wanted to address the possibilities.

It is possible, but it certainly isn’t likely.

LG's New EV Battery Plant Is a Welcome News for Tesla
Tesla Giga Berlin's New Hurdle: It's Not Only the Gov't, but Now Tesla Itself
END_OF_DOCUMENT_TOKEN_TO_BE_REPLACED