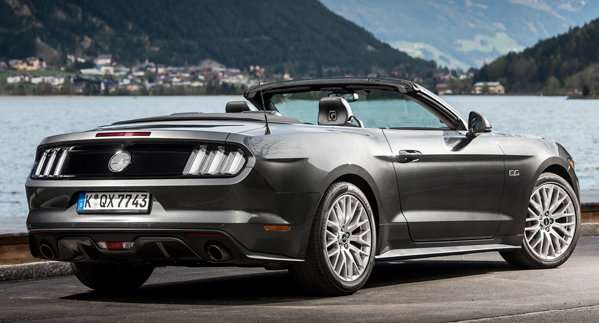 The Ford Mustang has quickly become one of the most popular sports cars sold in the US and in many foreign markets, leading many people to ask us if there are any differences between the cars in the different regions – so today we bring you 12 ways that the European Mustang differs from the car sold here in the USA.
Advertisement

Since the new Ford Mustang was introduced last in 2014 as a 2015 model year vehicle, it has been the most popular 2-door car sold in America. The Mustang leads all muscle cars, all sporty cars and all 2-door cars in US sales, comfortably beating the Chevrolet Camaro each and every month since the new models hit the streets.

More surprisingly, the Ford Mustang has proven to be incredibly popular in many foreign markets around the world. In markets including the UK, Germany, Italy, China and Australia (just to name a few), the new Mustang is sold out through the end of this year and in some cases, the wait extends well into 2017.

The huge sales numbers in the US and these various markets around the world have made the new Ford Mustang one of the world’s most popular cars and a big part of that success comes due to the right hand drive offering for those applicable markets. In the past, the Mustang has been available in other markets, but never with the appropriate right hand drive configuration. Also, the Chevrolet Camaro is available in many of these foreign markets, but GM still hasn’t shown any plans to make a right hand drive version – making the Mustang the more popular choice in pretty much every market in the world in which the two compete.

Many Exterior Differences
The majority of the differences between the American Mustang and the UK Mustang are found on the outside due to differing safety regulations in countries other than the USA. The car above is a European Mustang GT Convertible.

-The Mustang GT in the US has hood vents, the UK Mustang GT does not.

-The Mustang in the US has flatter mirrors that extend further from the car, the UK Mustang has shorter, taller mirrors with more of a triangular shape.

-The Mustang in the US has red rear-side parking lights, the UK Mustang has Amber lights in the same location.

-The Ford Mustang EcoBoost and GT in the US have a low profile rear spoiler, the UK Mustang does not have that spoiler.

-The Mustang GT in the US just has the “GT” badge on the taillight panel unless you have a special package like the California Special, but the UK Mustang GT comes with the faux gas cap between the tail lights.

Interior Differences
As mentioned above, one of the biggest differences with the Ford Mustang sold in the USA and UK is the fact that the European model is available (in select markets) with a right hand drive configuration.

The other key difference with the interior is that in the UK, the Mustang is really only offered in “premium” form. The European Mustangs only come with leather seats and the SYNC 3 infotainment system, whereas American buyers can opt for a cloth interior with a less elaborate stereo setup. Basically, Europeans can only buy what Americans know as the EcoBoost Premium and the GT Premium – in either fastback or convertible form.

Drivetrain Differences
Finally, the drivetrain of the Ford Mustang varies a bit between the US and the UK. Here in the US, the base model engine is the naturally aspirated 3.7L V6, followed by the 2.3L EcoBoost 4-cylinder and the 5.0L V8. In the UK, the V6 is not available, making the 2.3L EcoBoost the “base” engine and the only engine offered in the non-GT models while the 5.0L V8 is standard in the Mustang GT.

In the long run, the Ford Mustangs sold around the world don’t look all that different than the cars sold in the US, but these 12 differences are what separate the European Mustang from the cars we know and love here in the US.