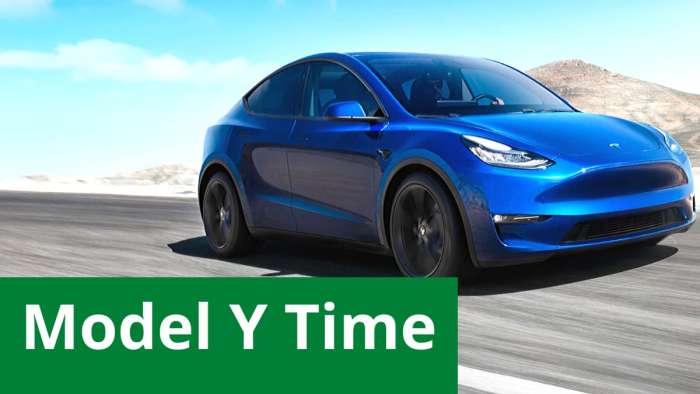 In this report I am going to share with you what the Tesla enthusiasts and supporters say about the 2020 Model Y being available in showrooms near you. As you may know, yesterday Tesla started sending out notification emails to some early reservation holders of the Model Y that their vehicles will be delivered in March 2020, way ahead of the schedule.
Advertisement

On the other hand, it would be nice to see Tesla’s new vehicles sooner than later.

Of course, Tesla’s marketing should be concerned about this, but when you are getting ready to spend $50,000 on a Model, seeing it would help a lot. What do you think? Do you agree?

Contrary to this, people also think that many auto shows are dealer shows, where Tesla is not welcome because Tesla sells directly to the consumer rather than follow the dealership car-selling business model.

The Model Y Demand Is High

But there may be another reason too why Tesla doesn’t participate in auto shows and bring the Model Y to showrooms early. The reasoning is simple. It’s because the Model Y demand is already greater than supply. Thus, there is no reason to further increase demand by participating in conventional marketing activities. Model Y is a great car and here are 4 reasons why it may soon convert even the Chevy Bolt owner into Model Y buyers.

But think about it. With over 300,000 Model Y orders and an estimated 532,000 CyberTruck orders why bother with auto shows and the expenses associated with participate in them in an environment where you don’t feel welcome. Tesla doesn’t even show the Model S and X at auto shows. You can see them at the local Tesla car groups who show their cars. And anyone that wants either vehicle has already made a reservation since those reservations are cancellable with minimal penalty. Plus having a friend give someone a test ride or post a video on YouTube has worked pretty well until now.

In other words, Tesla’s marketing has been impeccable. The electric car maker has introduced unique products and wrapped them with a story. People tell that story and support it.

In all honestly, the Tesla Model Y is the same as Model 3, just bigger. One can test-drive the Model 3 and visualize a bigger cabin interior, higher ride height and that will give him a good feel of the Model Y. This video from our Youtube channel, for example, shows that the Model Y has deeper and bigger frunk.

In conclusion, don’t expect the 2020 Tesla Model Y coming to the showrooms anytime soon. Tesla will first deliver them to those who have made the first reservations. Then, perhaps in 3 months or so, we may start seeing some Tesla Model Y vehicles in the showrooms around the country.

If you have made a reservation for the Model Y, please let us know in the comments how you did it and what was your experience. See you in my next story revealing the approximate date of Tesla's Berlin Gigafactory groundbreaking, based on a local mayor.

DeanMcManis wrote on February 26, 2020 - 7:57pm Permalink
Yeah many buyers who placed pre-orders online for the Tesla Model Y have already gotten email confirmations that they can pick up their cars as early as March 15th, which is exactly 1 year after the Model Y was shown off, and about 6-8 months before the initially proposed delivery date. I also suspect that the Cybertruck will be delivered early as well. As it was before the top Performance models will ship first. In fact some people who ordered their Performance Model Y less than a month ago have already gotten confirmations for delivery. The downside for Model Y pre-orderers is that it many be a couple months more until they see the regular dual motor models, and then later before the entry level models are shipped. But I suspect that the lowest priced Model Ys may be sold before the first Mach-Es are in Ford dealerships, and even the lowest priced Model Ys should be out before the official release date at the end of the year. I am very eager to see comparisons between the Performance Model Y and the Audi E-Tron and Jaguar iPace. Unfortunately, production of both the E-Tron and I-Pace EV models have been delayed until further notice due to shortages of batteries.
Ed Hart wrote on February 29, 2020 - 10:12pm Permalink
At this stage of their development, Tesla does not need to promote their products. Tesla simply needs to deliver a high quality product in a timely manner...then be able to service them as needed. The demand for Y is very strong and will get stronger as deliveries begin and the vehicles are seen by consumers and reviewers. So, just focus on scaling up...and getting it right.