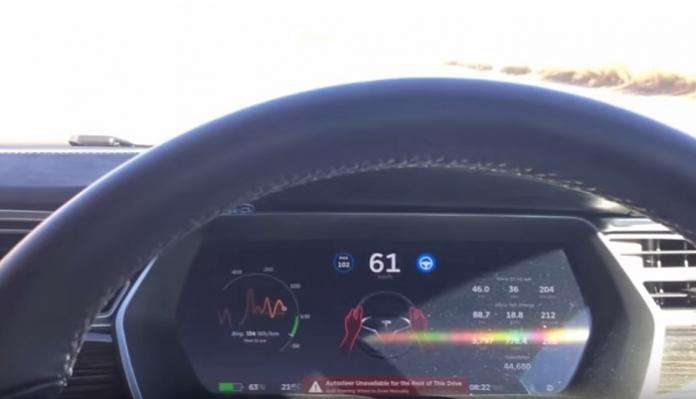 Many car enthusiasts know that Tesla is a leader in Autopilot technology, but do you know for example what will happen when you fall asleep with your Tesla Model S on Autopilot?
Advertisement

When the Autopilot realizes that the Tesla Model S driver is sleeping or not responding first visual and then audio warnings repeatedly pop up. The first message with the visual signal on the dashboard reads "Hold Steering Wheel. Then, if not responded, with the audio warning another message pops up which reads "Autopilot unavailable for the rest of this drive. Hold steering wheel to drive manually."

While the Model S waits for your to respond the speed gradually drops. In the video, shared below, the road is clear.

But what is strange is that the car seems to stop in the middle of the road. It doesn't pull right, but stops on the road. Now this seems dangerous to me, but consider the drop of the speed is gradual, I assume the drivers of the cars that are behind your car will notice that you are stopping and they will stop too.

By this time the driver may wake up, but what if he or she may have had a health issue and unable to take control of the car? So what happens when you have an aneurysm or some other abrupt heath event that stops you from controlling the car before you can bring it to a stop safely yourself.

"Looking at it that way, this is the best possible outcome. The car stays on the road (instead of going off road and hitting a tree, or a person or a house or whatever), turns on the hazards, slows gradually. It even has a good chance to save your life. When people look to see why the heck a car is blocking the road, it won't be long before 911 and an ambulance is on the way," writes one Model S owner in Reddit.

If so, it would be better if Tesla could create an unresponsive driver emergency signal for this exact reason. Let it be extra fast and when anyone sees a car stopped on the road with the lights flashing rapidly cars approaching know to check on the well being of the driver.

Autopilot has massive implications for the car industry. Here are some of them published in this previous story at TorqueNews.

Here you can see the Tesla Model S Autopilot stopping in action. What do you think?