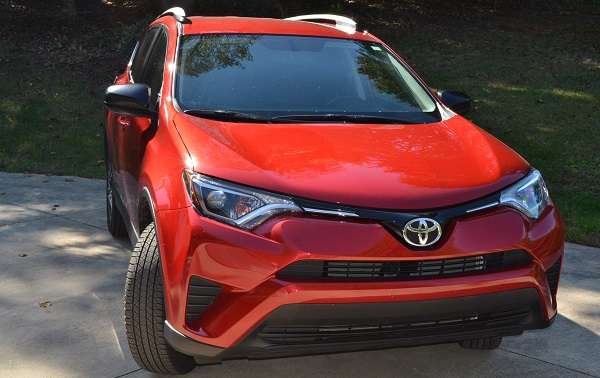 What Do RAV4 Owners Say About the 2016 Model

These days I am test-driving the 2016 Toyota RAV4 LE FWD SUV and love it. Since TorqueNews has already reviewed the 2016 Hybrid RAV4, this story will focus on what current RAV4 owners think about their SUV.
Advertisement

Although the 2016 RAV4 costs little more than most rivals, it’s one of the most reliable small SUVs you can get. I asked TorqueNews long-term reporter John Goreham, who specializes in Toyota/Lexus coverage and has reviewed the 2016 Hybrid version of the Toyota RAV4 how he would characterize this SUV in one sentence. “For those who want a bit more power and a few more mpg Toyota also offers the RAV4 in a hybrid,” said Goreham in a written reply. 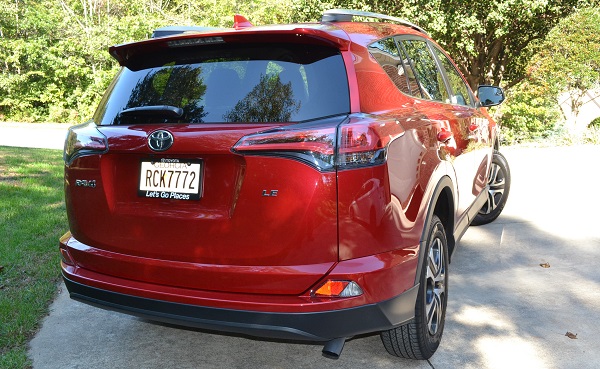 It’s a little pricier than the comparable small SUVs, but you get good reliability, safety and a bit more power. In fact the hybrid version of the 2016 RAV4 is only 700 dollars more expensive than the non-hybrid version. Speaking and chatting with current RAV4 owners, most of them point to the hybrid version and say it’s well worth it. The price of the 2016 Toyota RAV4 LE FWD is $25,925, which includes all basic goodies and delivery processing and handling fee, which is 900 dollars.

When you drive, it you get a feeling that the car is built tough. In fact, many light armored cars are Toyota based.

“You can go Korean or a CRV,” tells me a RAV4 owner, named Bill. “I have a neighbor with a new CRV and it's already been towed back to the dealer for repairs,” he wrote. In fact I went ahead and checked the number of 2016 CRV complains vs number of 2016 RAV4 complaints on carcomplaints.com. If you check there, you will see that 2016 RAV4 has about 3 times fewer complains then the 2016 CRV. 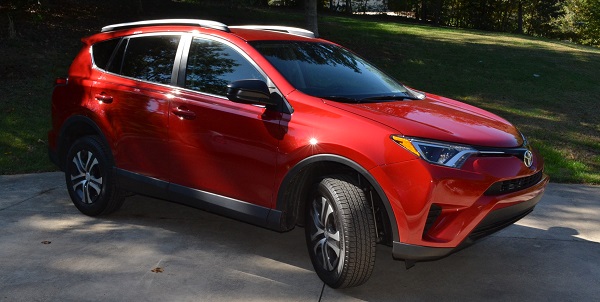 “I bought a Rav4 recently before screening almost all vehicles in this segment, it was as close choice between Rav4 & HRV/CRV. The reasons, No maintenance, built tough, longer life, good fuel economy and better driving and seating comfort over its competitors. Also, you can break a good deal if you are a good negotiator,” wrote another owner named Nicholas.

Another owner Kenny says he purchased his 2016 RAV4 XLE in June and gives an interesting reason why he chose the 2016 RAV4 over its competitors. “I went with the RAV4 because it came with more options than some competitors. Example sunroof, navigation, large touchscreen entertainment screen with apps. A lot more options for this trim line in the price range I paid compared to other cross over vehicles in its class.” The LE FWD version doesn’t come with a sunroof as it’s one of the added benefits of the XLE version.

I am driving the LE version. I do love the space for the passenger areas inside the interior and still good trunk space. The SUV runs smooth and love how it handles the roads. It’s got a good 4-star rating for the risk of rollover in a single-vehicle crash. The car has lots of tech goodies, rides super smooth, plenty of power. Toyota has done very well with this vehicle. 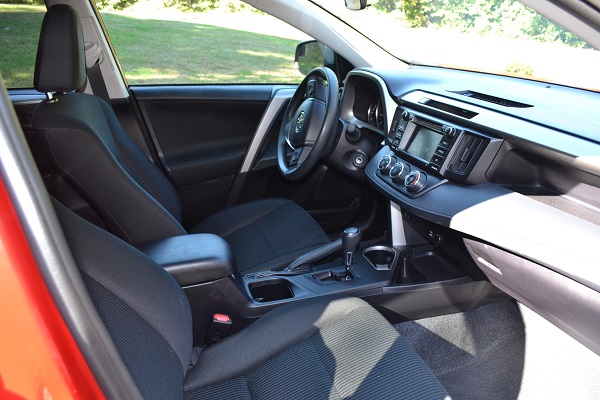 You know, Toyotas might cost more upfront, but they are like the Energizer Bunny, they keep going and going. One owner told me that his RAV4 just reached 200,000 miles and it’s still nicely driving.

A new RAV4 owner Maddie writes. “Just bought mine yesterday, I decided on that because of the warranty and the upgraded features. It is very hard to get used to because I have never been in a car that done so much technology wise! The backseat has a lot of space also. I honestly cannot find one thing I would change about it not even the price.” 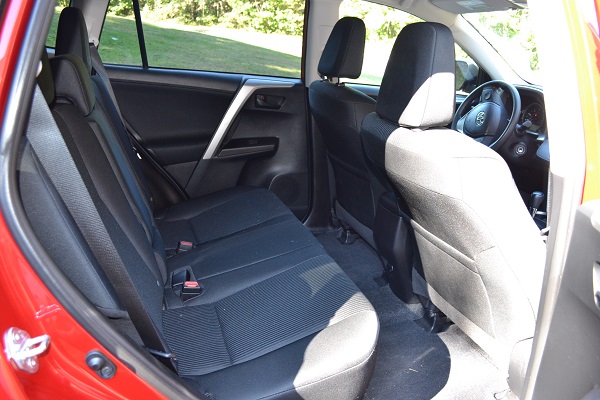 Indeed, the 2016 Toyota RAV4 has gone a long way since its first unveiling of 1995. So many upgrades and goodies and the addition of the hybrid version in 2016. RAV4 has really gotten better with each new generation update. No wonder this SUV has remained a long time favorite among SUV drivers due to its character.

Hiep Nguyen wrote on October 17, 2016 - 2:51pm Permalink
Excellent article with lots of good points about why Toyota is a solid choices among this segment. I am a current owner of a 2016 Rav4 Hyrbid in Limited trim and a lot of the positive that were mentioned in the article were, in fact, reasons why I bought the vehicle. It's worth elaborating further though, that the $700 difference between the hybrid version and non-hybrid is among the AWD versions only. Since there were many positive points that were made in the reading, I felt that some negative points about the SUV would be more constructive: 1. The power lift-gate is painfully slow sometimes. Also it will only open from the cabin inside (with the button behind the steering wheels) if all 4 doors are unlocked. This isn't mentioned in the manual. 2. The ride in the Hybrid version can be harsh and stiff. Small imperfections in the road is very noticeable in the cabin. I live in a section of town with fairly bad roads so this is more important to me than most people will. 3. The infotainment system have a habit of crashing if many things are going on at once. Example would be like having Pandora app running while trying to input a navigation coordinate. This can be fixed by holding the power button to the radio for 3-5 secs. The whole system will reset. 4. I'm not sure if this is a problem with my unit or a common one but if you an app for audio source, like Pandora, or Slacker, or iHeartRadio; there will be problem switching to another source the next time you start up the vehicle if you don't have the same phone that provided data to the service that you used the last time you ran these app. It can be extremely frustrating to switch audio source if this happen because every time you go into audio it will display message like "Please check your data/subscription." instead of letting you choose another source. The only way to go around this is to use your voice command and ask the radio to switch to FM/AM/XM. 5. Toyota is extremely allergic to Android Auto/CarPlay at the moment so if you're looking for that convenience, it simply isn't there. 6. Lane Keeping Assist (LKS) is very "late" in correcting you, so it won't nudge the steering back until your wheel has already crossed the line. This means it isn't very useful at steering the car by itself on long road-trip or so. 7. This is another thing that I'm not sure is specific to my vehicle or it's common but on the Limited trim, when you lock the car, the headlight turns on. On most vehicle, even the Toyota Camry that I have, if you press the lock button twice on your fob, it will turn off the headlights (if the vehicle has automatic headlight). However, no matters how many time I press the lock buttons on my Rav4 Hybrid fob, the headlight won't turn off until roughly 30 secs later. This is just a little gripe I have, since I prefers that my car turn off the headlight when I lock it. I'll have the dealer look into it when I come in for the first oil change and see if they can fix that. Other than those issues, I have been extremely happy with my purchase. The car is gorgeous in the Electric Blue Storm color, the MPG is as advertised and if I put it in sport mode, the vehicle is pretty fun to drive. Lots of tech, lots of amenities like heated seats, power sun-roofs and so forth. I haven't had a Toyota before but I hope this vehicle is as reliable as they said. We have hope that this SUV will be in our family for many years to come.
Mark Day wrote on October 17, 2016 - 7:18pm Permalink
Redesigned RAV4 (2013 to present) a big disappointment. RAV4 of 2012 was excellent. How the RAV4 was de-contented - No: V6 Engine option, 3rd row option, Full size spare tire, Optitron gauges, Headlamps "ON" indicator, LED tail lights & brake lights, Auto OFF headlights (except Limited), , Seat fold-down levers in cargo area, Sliding adjustable 2nd row seats, Door sill protectors, 12v Power outlet in cargo area, Large under floor storage compartment, Sun visor extensions (except Limited), Dual-level center console storage, Locking glove box, Upper glove box with door, Footwell lighting (Limited), 110V AC power outlet (Limited), Real Leather seating, Cross bars on roof rack, Hill Assist Control (HAC), Downhill Assist Control (DAC), Fender flares on Sport and Limited, Body colored front and rear bumpers. To me, currently, the KIA Sportage SX turbo is more desirable.
Bill mee wrote on October 22, 2016 - 10:46am Permalink
I had a 12 camry le but not for long. It was the absolute cheapest full size car made. Buy this car like you want chicken soup when having a head cold. A soulless grey people mover. We will see how the 17 v turns out. Perhaps we will be upgrading. How is honda doing at beating toyota in fuel efficiency?