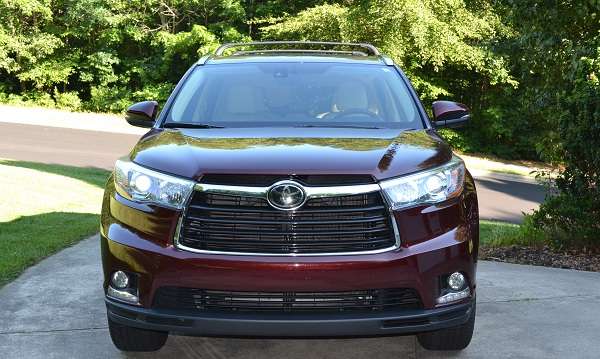 What Can You Expect from 2015 Toyota Highlander: The Safest Crossover in Its Class

Two weeks ago I had a chance to test drive the 2015 Toyota Highlander Limited PLT – V6 AWD model. With my family I drove it for a week, which also included a trip from Hickory, NC to Washington, DC. Being one of the safest cars in the world (according to IIHS), I can easily confirm that this is one of the best cars I have test driven in the past five years.
Advertisement

How the 2015 Toyota Highlander drives.

The suspension is very nice. Overall this Highlander gives a superb ride experience and feel like a really luxury. You have to experience the panoramic roof, which is also called a moon roof. When in use, it gives so much extra light to the interior and adds to the uniquely luxurious experience of the passengers.

Several people whom I asked about the 2015 Highlander, told me the towing is really powerful, easily towing between 2000-4000 lbs. and that this SUV really performs great in the snow-covered roads. It stops very easily. Acceleration is great and I was very satisfied with it. I asked a current owner who often uses the Highlander’s towing capacity and he also confirmed that he was very satisfied with acceleration while towing. When driving you can easily feel the power this car exhibits. Another fellow Highlander owner told me his car can easily pull a trailer, which he does and also confirmed that the performance is excellent in the snow. I had no way of testing the car in the snow as I was test driving it during a summer time in sunny North Carolina.

This is one of the best SUVs I have ever test driven. It’s a nice upgrade from the Venza, which is still a great SUV, but a little smaller.

The ride of the 2015 Toyota Highlander is very smooth. It gives a pretty good feeling. The Interior has plenty of room and lots of space for seating our three children. The third row is very roomy, but could possibly be little roomier. However, I am glad that the third row seats slide and fold down giving more cargo space. What I particularly liked about the 3rd row is that one seat is separate from the other two. This gives an option of sitting a third child in the 3rd row, while folding the other two seats in the third row and using more cargo space. This is especially handy for families who are traveling and have several pieces of luggage. We were traveling from Hickory, NC to Dulles International Airport near Washington, DC and this option really helped us - sitting our third child in the 2rd row, while folding and sliding the other two third-row seats and using the space for cargo.

Some people, when reviewing the Highlander, compare it with minivans. While they make these comparisons because of Toyota Highlander’s big size, comparing SUVs to Minivans like comparing apples and oranges together. I have a 2007 Honda Odyssey and Odyssey is a minivan and the Highlander is an SUV. If you want a Minivan, Toyota has the Sienna. I have test-driven it too and it’s a great van. If you have three or more children you may want to go with a Sienna. But the Highlander is an SUV. It’s got great captain’s chairs in the second row and many parents love the powerlift tailgate, which many comparable SUVs of older versions don’t have. Powerlift tailgate is a great feature in the 2015 Toyota Highlander. You don’t have to push up or stretch to pull down.

I spoke with a Honda Pilot driver, who sat at my 2015 Highlander and then asked me to sit in his Pilot (His vehicle is several years old). Obviously, there was a big difference. The Highlander’s seats are much more comfortable.

The interior of the 2015 Toyota Highlander has something that I haven’t seen in other cars. It has a long nice tray under the radio, which can be really useful. You can leave your phone or valet there, or just other handy things. It has a big bin, which is great for keeping stuff out of the sight when you are not in the car.

The new Highlander is all about comfort. We had a 5 hour-long trip to Strassburg, VA and then continuing to Washington, DC. When we got out of the car, we didn’t feel that we were in the car for 5 hours. I felt it’s because of the comfort, the wide space in the interior and the powerfully smooth ride. I only wish the third row had little more room and that the car seats latched more easily into the 2nd row in the middle. But overall, this is a very good car and one of the safest vehicles according to IIHS.

The Price of the 2015 Toyota Highlander and Options
The package that was delivered to me for a week-long test-drive amounted to 47,671 U.S. Dollars. But this price includes all options, including delivery processing and handling fee of $885. The manufacturer’s suggested retail price of the 2015 Toyota Highlander is $43,790. This is the platinum package which includes the entire Driver Technology Package such as Safety Connect, pre-Collision System with Dynamic Radar Cruise Control, Lane Departrue Alert with Automatic high Beam Headlights. The MSRP of the 2015 Toyota Highlander Limited V6 AWD also includes panoramic moonroof, heated steering wheels, heated perforated leather second-row Captain’s chairs. For additional cost you can also include rear bumper protector, running boards, paint protection film, remote engine start, towing receiver hitch with wiring harness, four season floor mat package and cargo cross bars. The overall cost amounts to $47,671.

Conclusion
Obviously this is not an exhausting review of the 2015 Toyota Highlander that includes info on all its great features. You can read all about it in the vehicle’s 356 page-long Owner’s Manual. I just wanted to share with our readers that after test-driving it for a week and driving my family around on three to six-hour-long trips my impression is extremely positive. It’s a great looking car with lots of wonderful features for an individual or a midsize family with 2-3 children.

Richard wrote on July 2, 2015 - 1:09am Permalink
My 17 year old is hoping to get my 2009 Jeep Wrangler. In turn, I was considering for myself a new Toyota Highlander, but even a base model is too cost prohibitive. I will now likely take my time and patiently peck around the internet, ask for cross-dealer inquiries, and put some feelers out for a garage queen -- older model, low mileage, Land Cruiser like the one I had use of while in Iraq, or perhaps the same scenario in some other make and model SUV. At $40k-plus, I would have imagined a new 4-Runner or a darn good moderately used Land Rover or Land Cruiser.