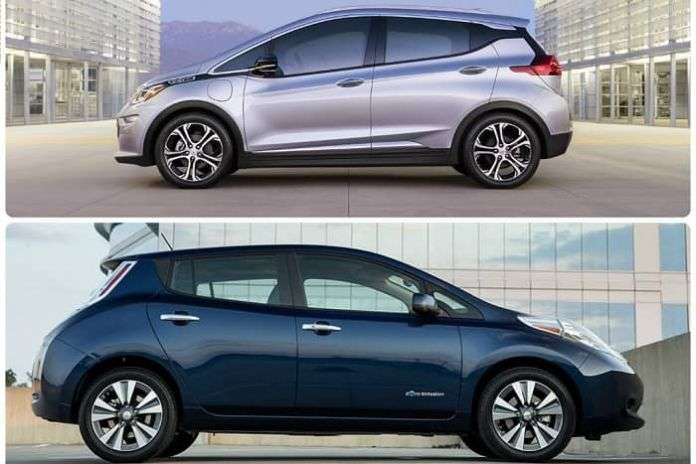 Few days ago on SF Bay Area Nissan LEAF Owners group on Facebook there was an interesting discussion, in which group member Chris Mossing wrote that he has been driving a Nissan Leaf since May 2011 and really like it. But now he needs more range and is researching the Chevy Bolt. "Have any of you made the switch to Bolt? If yes, what are the pros and cons of the Bolt versus the Leaf other than the extra range," he asked the group members.

Here are some interesting and eye-opening responses from the group members who have already made a static from Nissan Leaf to Chevy Bolt. This doesn't in any way mean that Nissan Leaf is a less superior car as currently it is beating expectations with 9000 orders in two months.

So Nissan Leaf vs Chevy Bolt

Eric Tissot-Dupont - I went from a 2011 LEAF to a Bolt a few months ago. IMO, the Bolt is a superior EV in all aspects. Range, performance, charge management, integration. The LEAF is more comfortable, the ride is smoother and the seats are way better. Since I have the Bolt, I am 100% convinced that an EVs can replace ICEs for 99.9% of the population. They just have to get the cost down.

David Karpman - I find the Chevy Bolt's seats a lot more comfortable than the Leaf. The Leaf's seat were way too "mushy". The Bolt seats are a lot higher, allowing for a more natural (less like a cockpit) seating position. Great for long drives.

Kelly-Richard Olsen - You really should sit and drive a Bolt for an extended period of time to make certain the seats are bearable. This is easily the number one reason people have given for passing on the car. If you can handle the seats or do what many have done which is put foam padding under the covers or buy a cushion to put on top of the seat then it might be a great car for you. I absolutely despise the seats but I’m so over having only 65 miles of range and having to stop every 45 minutes or so to charge on trips over 60 miles that I’m very close to getting a Bolt hoping that I can somehow tolerate the seats of torture.

Lusty Wench - I had 2011 Leaf. I got a Bolt in mid-september. I love it, except for the sun visors, which are way too short for me. I spend far too much time holding up a hand to block sun.

Benita Asher - We had a 2011 Leaf for 6 years, got a new battery under warranty, but the range was just a downer. We love our Bolt, routinely get 300 miles per charge (hilly driving, 55mph or less). Range anxiety is completely a thing of the past, we only charge at home now. I literally drive for a week, and then still have the equivalent of two or three Leafs' range. We did not like the seats, but it was an easy fix with some foam from Walmart and aftermarket seat covers. No other complaints at all. The regen is amazing, never use the friction brake.

Larry Crosby - I made the switch 6 months ago and couldn't be happier. The range is real and that's a game-changer.

Will Beckett - I had a 2011 Leaf that went with my ex-wife four years ago. Also had a Think City and sold it to get the Bolt EV. Best car I have ever owned but the tech is better in the leaf. Everything else is better in the BoltEV

Remy Tennant - I had two Leafs and now have a Bolt, and I love it. With it's added range and powerful acceleration, the Bolt is in another league. Only reason to possibly not get one is if you happen to be one of the unfortunate few who finds the seat uncomfortable.

What about you? Do you own one or both of these cars and would like to share your opinion in the comments section? Please let TorqueNews readers know your experience as we discuss these two great vehicles.

arthur4563 wrote on October 30, 2017 - 3:32pm Permalink
I'm astounded that people don't realize that you can have seats reupholstered if they are a problem - we're not talking significant amounts of money here. And you can get them more to your liking than any auto company can. As a young man, people were always reupholstering their seats - naughahide was the popular cover. Still is for me.
Scott12 wrote on October 30, 2017 - 4:43pm Permalink
What you say my still be true to an extent, but many cars now come with airbags in the seats so it may be a bit more complicated than it was in the past.
JP White wrote on October 31, 2017 - 6:36am Permalink
I'm astounded you think its normal to reupholster a seat in a brand new car. Clearly the seats are sub par judging by the comments here and elsewhere.
Tom wrote on October 31, 2017 - 9:45pm Permalink
It's not even a matter of reupholstering them. There is a quick, cheap fix, reversible if desired, that doesn't change the look of the seats. If you look on the Bolt owners forum you'll see that each seat can be custom tuned to your liking in just a few minutes with some inexpensive foam inserts. Also, Lusty Wench, the sunvisors are an easy fix too. The visors from a 2017 Chevy Volt can be installed into the Bolt with some minor modifications. Again, search the owners site at Mychevybolt.com. They telescope and match the interior better than the cheap Bolt visors. The Bolt comes with grey vinyl visors, the upgraded Volt visors are covered in the same cloth as the Bolt headliner. Much better.
Frost wrote on October 30, 2017 - 3:45pm Permalink
Nissan Leaf has: Bad battery, low range, languishing design, Bolt competitor not coming until 2019, weird interior... the list goes on.
John falk wrote on October 30, 2017 - 4:34pm Permalink
For the owner with the sun visor problem. Our volt 2014 has a visor you can extend. Put the visor to the side and move it. It should slide on the support bar. Enjoy
Harvey wrote on October 30, 2017 - 8:51pm Permalink
Nope -- the visor on the Bolt does not slide, sadly. One of the flaws of the Bolt.
Tom wrote on October 31, 2017 - 9:47pm Permalink
You can swap in a 2017 Chevy Volt visor that does telescope.
Daniel M Falkoff wrote on October 30, 2017 - 5:56pm Permalink
I have been very happy with my 2012 Leaf (got ued, a tremendous bargain), which I've had about 15 months. It meets all my normal needs for commuting, and runs solely on my ;free PV electricity. Life with it is a dream. I'm willing to believe that the Bolt is superior in most ways, but I care too much about LOOKS! Unlike some, I happen to like the Leaf, and fairly few other cars. Certainly the Bolt has no esthetic appeal at all for me.
Harvey P wrote on October 30, 2017 - 8:58pm Permalink
I had a 2014 LEAF I swapped out for a 2017 Bolt. There are a few features I miss from the LEAF but overall, the Bolt EV is a much better vehicle. Biggest factor for me is RANGE. We live in a very spread out area and driving 100-140 miles on a given day is the norm. My work commute is only 50 miles round trip but my wife may drive well over 100 to visit various clients. If we have a ballgame or play after work, well that's a trip downtown (25 miles from work) and then a trip back home afterward (35-40 miles). We can go all day on the charge from the night before. In the LEAF we often would have to stop somewhere and charge for 1/2 to 1.5 hours to make it home. The Bolt EV = Freedom. We have the DCFC option and have taken the Bolt on long road trips. I never even considered this in the LEAF. The LEAF never left the county. Heck, I had to recharge just to pick someone up from the airport with the LEAF.
TJ wrote on November 1, 2017 - 6:55pm Permalink
I find the Bolt seats very comfortable even during long trips. I am not a big guy though.
ddog FS-13 wrote on November 3, 2017 - 10:24pm Permalink
We have both--2011 Leaf and Bolt since Feb. Bolt is Great!...Favorite feature is regen braking---wonderful with hills; Also like Android Auto
Ayt wrote on January 6, 2018 - 10:44pm Permalink
We have both, leaf and the bolt, i've even test drive the new 2018 leaf at the auto show, just love the Bolt, I've travel to the place that i never think t is possible for the leaf to do so. Yes the seat could be more plush, visor could be bigger, but hey no car is perfect right,... with the range and the speed, and the roomies inside this tiny car, those tiny issue don't seem to bother me as much... and thr sound systrem.is way better then my current 2014 leaf. Best EV car beside the Tesla...
Harvey G Payne wrote on January 9, 2018 - 3:32pm Permalink
There are some features of the Bolt and Nissan LEAF that are better than our Tesla Model X. As far as I know, there is no one vehicle that is superior in every way to the others, at any price. Example -- one feature I miss in our Tesla is the ability to play music from my iPod while having my phone connected to Bluetooth for calls, contacts, and calendar.Tesla is only one device at a time. It doesn't support USB connection of the iPod for music like the LEAF, Bolt, and frankly, our Fiat 500e.